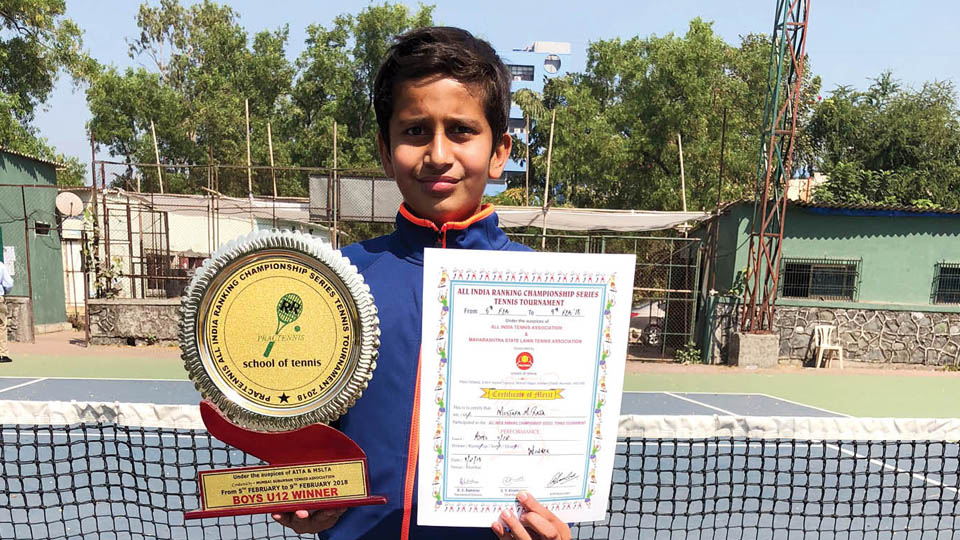 Mysuru has been producing Talented Tennis players from time to time who have gone on to represent the country in various events. One such player who has made his mark in the State and National level is city’s upcoming tennis player Mustafa M. Raja. He has been performing consistently in the National level U-12 & U-14 Tournaments and is among the top sub-junior level tennis players in the country. Recently, Mustafa, who took part in the AITA U-12 & U-14 Championship

Series Tennis Tournament conducted by the Coimbatore Tennis Players Parents Association at Levo Sports Arena, Coimbatore, recently, finished runner-up in both U-12 & U-14 Singles events. He is our ‘Star This Week.’

Mustafa, a 11-year-old, is a student of Excel Public School, Mysuru and is a product of the  R. Nagaraj Tennis Centre in city. In the U-12 Boys Singles final, top-seeded Mustafa lost to Rishi of Bengaluru 2-6, 5-7.

In the semi-finals, Mustafa beat Vatsal Manikandan of Karnataka 6-1, 6-1 and entered the title round.

Mustafa also won Boys U-12 Singles title and finished runner-up in the U-14 Doubles event in the MTC AITA Talent Series Tennis Tournament-2018 for U-12 & U-14 (Boys & Girls) held at MTC, Mysuru, last month. In the U-12 boys final, top-seed Mustafa beat Anoop Keshavamurthy (TN) 6-3, 6-3 to clinch the title.

Mustafa and Yashas finished runner-up in the Boys U-14 Doubles event.

Mustafa is the son of Mutruza Raja and Farida Raja and is encouraged by his school and coach in his pursuit for higher acclaim in this game.

Currently ranked No.20 in the country in the U-12 section and No.2 in  the State, Mustafa has been performing consistently in the National level tournaments and intends to work hard in the days to come.