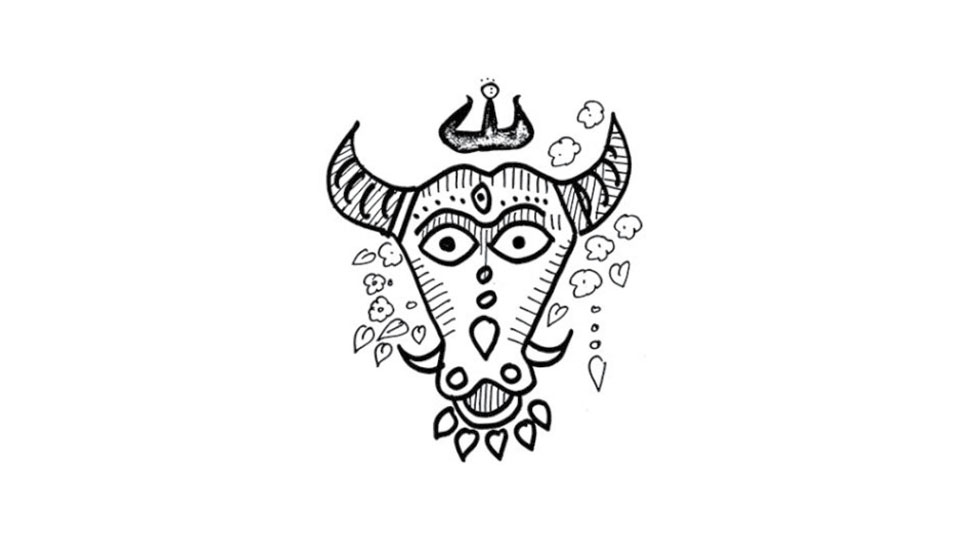 If one travels around Pune, one occasionally comes across small folk shrines dedicated to a deity known as Mhasoba, or the Buffalo-God. Not much is known about him, but the shrine is clearly not a Brahminical one and there is nothing about him found in Sanskrit literature. Yet he is venerated by common folk, usually, those involved in farming and herding activities, who offer him milk and sacrifice goats and roosters to him.

Some link Mhasoba to proto-Shiva, the horned hermit image found in the Indus Valley seal. Others to the buffalo-demon, Mahisha, who is killed by Durga. Some say he embodies Yama, the God of Death, who rides the buffalo, who is defeated by the Goddess. He is also linked to the seven folk Goddesses of Maharashtra, Sati Asara, as their brother, companion or son. Many view him as a Kshetra-pati or Grama-deva, meaning the protector and lord of the region.

Mhasoba may be linked to Pota Raju, a character found in Deccan and Tamil folk mythologies. Pota Raju means ‘buffalo king’ so effectively Mhasoba. But those who venerate him do not know this connection. They know him as the devotee-servant of the Goddess, or the companion of the seven sisters (Sapta-Kanni). Pota Raju is often visualised as holding a human head in the left hand, thus imitating Bhairava, the guardian of the Goddess in North India. This head is said to be head of Brahma, or Daksha, or a demon; if placed on the ground, it will destroy the world, or the killer (Durga in this case), and so he holds it forever, earning the love and gratitude of the Goddess.

In Karnataka, Pota Raju is the brother of the Goddess Renuka. Renuka was a Princess married to the hermit Jamadagni, who does not know her great powers. Pota Raju asks her to come back to her father’s house and protect it from demons. In the war that follows, Pota Raju helps his sister-Goddess by serving as her spy and charioteer. In many ways, he is to her as Hanuman is to Ram.

During festivals, young men paint their face and dress up as Pota Raju and dance to the glory of the Goddess serving as her priests, holding whips in their hand and sticking out their tongues like dogs and cats.

In folk tales, Pota Raju is famous for his appetite and his thirst and that makes us wonder if he is linked to the preta, or ghosts of ancestors, that are eternally hungry, and yearn to be reborn. The Goddess, in her most elemental form, before she was domesticated, refined by Brahminical puritanism, was described as being surrounded by a horde of pretas. She and they had an insatiable appetite for flesh and blood and so patronised hunters, killers, and warriors who provided them food.

Is Mhasoba of Western India, same as Pota Raju of Southern India? Are they related to the buffalo demon killed by Durga? Are they related to Shiva who is Durga’s husband or Bhairava, who serves Durga? Is he lover or enemy or servant of the Goddess? Our desire for a single universal myth does tempt us to weave these various threads into a common narrative fabric. Unfortunately, the world is not so simple. It is possible, these are fruits born of the same seed. Or they are just fruits of different seeds, in the forest that is non-Brahminical folk Hinduism.