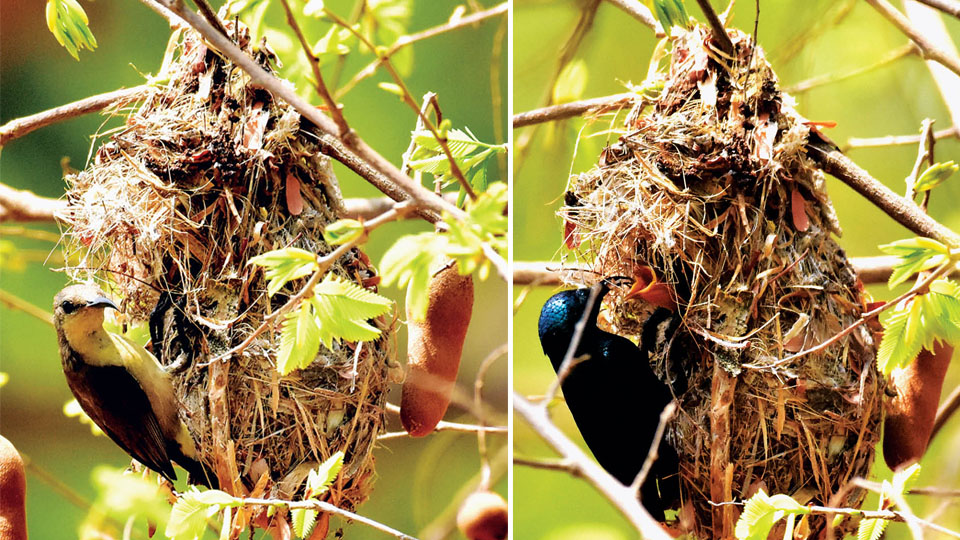 Nectarinia… Nectariniidae, as the name itself suggests, is a Family of Small Birds, smaller than Sparrows, energetically and boisterously flitting around in gardens and wild places, wherever there are abundant flowers, to relish the sweet flowers . These Nectar Seekers, the Nectarines as they are called in Ornithology, have their own Family called the Nectarines, consisting of 15 species in the country with five species in Karnataka and South Western part of the country. Mysuru has two species — the Purple-rumped Sunbird and the Purple Sunbird,   the one in the pictures here.

The highly iridescent metallic Purple coloured one is the male and the Brown & Yellow bodied ones are the females. Cynniris asiaticus is the Taxonomical name of this species. They have needle-like long beak, like a hypodermic syringe, and a longer tongue, which help them in sucking up the nectar. Though flower nectar, the high energy sugary liquid, is their main food, they take Spiders and other small insects to supplement their protein requirement.

Purple Sunbirds are not very comfortable in urban surroundings, like their cousins the Purple-rumped Sunbirds who prefer urban gardens, and are more likely to be sighted on the fringes of human habitations and agricultural locales. The shiny lustrous, Purple coloured male, singing high pitched notes from the top of shrubs like Calatropis (Yarkada gida in Kannada) or Lantana to claim a territory to nest and forage, attracts females, and if found suitable, form a breeding pair. This is for life. They stay together for the rest of their lives.

After the courting period, when it’s time to raise a family, the male selects a nesting place, usually from the overhang of medium sized trees and at the end of a thin branch, making sure the branch will not stand the weight of any potential predators like cats, mongooses and the like. The female takes the entire burden of building the pendulous nest, made of dried grass blades, plant fibre, pieces of dried leaves and held together by cob webs. The female  takes about 5 to 7 days to complete the nest fully ready with an egg chamber and a small canopy to keep the rain & shine away, and in about the size of a human fist. During this nest building tome, the male is only an escort and guard to her, alerting whenever he finds intrusion. In a couple of days, two or sometimes three eggs are laid about the size of a peanut, white in colour and blotches of brown. Here again it is the female which does the brooding and incubates the eggs for close to 17 days. Finally, comes the tiny chicks, blind and helpless but ever hungry and greedy to get fed by the parents.

At this point of feeding the gluttonous chicks, the male takes the role of the main provider. He turns into a dutiful hard working father forgetting his flamboyant and male attitude, he devotedly feeds chicks.

The chicks under the care and pamper of the parents, grow up fast and fledge within two weeks. Until breeding age arrives, both the male and female chicks look alike like their mother in Brown & Yellow Plumage. Once the male attains the breeding age, that is in about six months of age, the Purple Shiny, Lustrous, Iridescent colours start appearing and there is a stage when the male has the mothers colour and the patchy appearance of new Purple feathers like his father’s. This stage is called the Eclipse Phase. Beautiful shiny birds, flitting in the gardens, seeking nectar from the flowers and in turn pollinating many species of plants has a vital role in the Eco-System. Replacing the nectar producing native shrubs and plants with more exotic and coloured foliage plants and also the rampant use of pesticides are the only threat to their populations.

As per the International Union for Conservation of Nature (IUCN), these birds are in the Category of LEAST CONCERN, but that does not mean all is well, local populations are getting rarer and rarer, which would one day ring the PANIC BUTTON. Should we wait for the Panic Button or should we be more considerate towards such beautiful species. You  are the JUDGE.