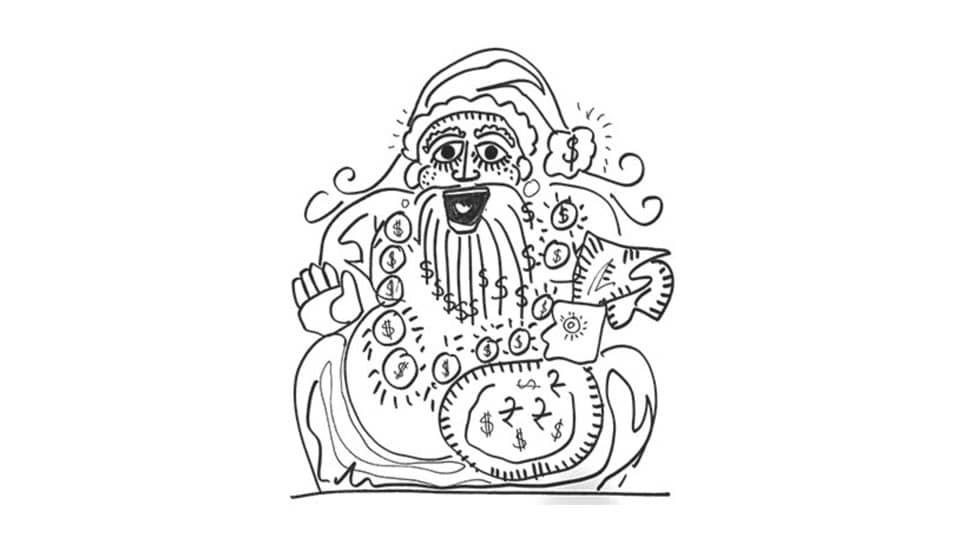 The Prosperity The Gospel

Have you noticed that Jesus Christ is thin and Santa Claus is fat? Have you noticed that Christmas is increasingly less about the birth of the Christian Saviour, and more about snow, reindeer and coniferous trees, none of which were around when Jesus was born in the barren desert town of Bethlehem 2,000 years ago?

The evergreen coniferous tree and herds of reindeer were pagan symbols of fertility as was the corpulent Santa dressed in red, who reminded North Europeans of the gold-rich bearded dwarves of Norse mythology (we have seen them in Hollywood films such as Hobbit and The Lord of the Rings). The rich corpulent dwarf myth motif manifests as the yakshas of Buddhist, Hindu and Jain mythologies. It is not mere coincidence that Ganesha and Kubera are as plump as Santa Claus and are bestowers of fortune. This modern Christianity seems to reveal a shift from the older central message of Christianity that valourised poverty, a shift that is reaching alarming proportions today.

In the Christian Gospels, Christ makes a powerful statement, “It is easier for a camel to go through the eye of a needle than for a rich person to enter the Kingdom of God!” Many in the Church have taken these lines to mean that Christ approves of those who shun wealth, embrace poverty. Many saw this as Christ disapproving of those who hoarded wealth and caused suffering to the poor. In general, Christianity was seen as approving the simple life of charity.

This was used by the Early Christian Church to combat the wealth and debauchery of the Roman Empire. However, not everyone agrees with this approach today, especially in America, the land of dreams, the land of capitalism, which has witnessed the rise of Prosperity Theology. According to this neo-Gospel, God wants everyone to be healthy and rich. We are sick and poor if we reject God or don’t pray to him or do not donate part of our earnings to those who speak for God.

To be rich, we have to believe in God, pray to God, and give a portion of our earnings to the ministers of God. The whole purpose of existence is to be affluent, say the Prosperity Preachers. All notions of being good, of being kind, of being caring, is sidelined to the notion of seeking wealth from God, which is seen as a divine right for those who authentically connect with God.

Naturally, this prosperity gospel has fired the imagination of the poor in America from African American, Latin American and white backgrounds. They are flocking towards tele-evangelists who glamorise wealth, equate poverty with lack of faith, and who demand a small charity donation to their church as proof of the faith in God. They quote the Bible to justify donations to their church, “Bring to the storehouse a full tenth of what you earn so there will be food in my house. Test me in this. I will open the windows of heaven for you and pour out all the blessings you need.”

This has startled many theologians and Church elders who feel that Prosperity Theology is being used to trick the gullible, and worse, change the message of Christ. They are demanding vigilance but cannot stem the tide of a world which prefers the jolly Santa Claus to the serene Baby Jesus, who was crucified for the sins of the world.