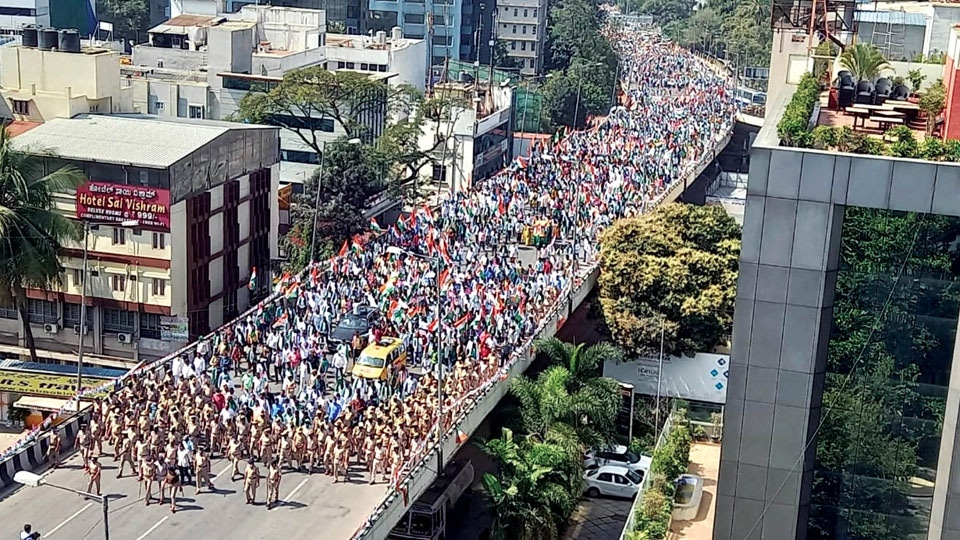 Bengaluru: Urging the Union Government to repeal the three newly-introduced farm laws, the Opposition Congress Party, supported by farmers, staged a massive rally in Bengaluru today as part of its ‘Raj Bhavan Chalo.’

The party workers and farmers, who arrived this morning at KSR Bengaluru Railway Station and at other places in thousands from different parts of the State, took different roads and flyovers to reach Freedom Park in the heart of Bengaluru, where a demonstration was organised by the KPCC in protest against the Centre’s farm laws and rising prices of essential commodities, before taking out a march to Raj Bhavan. Over 2,000 party workers from Mysuru too were part of the massive rally.

However, the protesters  were prevented by the Police from entering the city centre, which annoyed them.

Taking strong objection to Police action, an angry KPCC President D.K. Shivakumar asked the protesters to block roads, wherever they were stopped by the Police from attending the rally.

Later D.K. Shivakumar, Opposition Leader Siddharamaiah and other top Congress leaders addressed the party workers and farmers at Freedom Park, where they demanded the Union Government to repeal the farm laws, which were detrimental to the interests of farmers.

Condemning the rise in prices of essential commodities, the Congress leaders wanted the Government to take immediate measures for stemming the soaring inflation, which has severely burdened the common man. They warned of launching a movement if the Government failed to repeal what they called ‘anti-farmer’ farm laws and other ‘anti-people’ bills.

Although the Congress had planned to take out a ‘Raj Bhavan Chalo’ later in the afternoon, the Police denied permission for taking out the march.