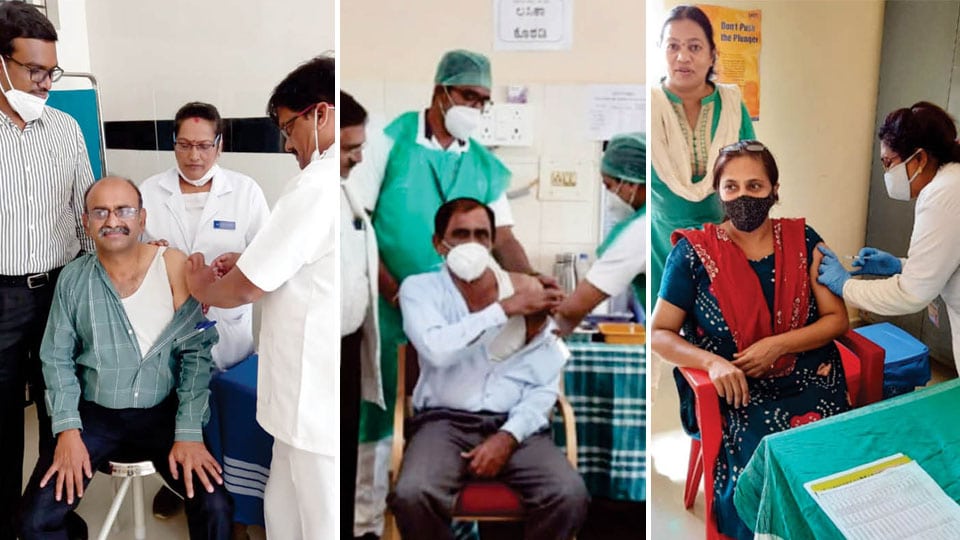 The District Health Department officials are trying to build confidence among healthcare staff about safety and efficacy of vaccines in the wake of underwhelming response to the drive which was launched on a high note by Prime Minister Narendra Modi on Jan. 16.

No vaccination drive was held in the district yesterday on account of immunisation of non-COVID-19 vaccines at the select Primary Health Centres and Anganwadis in the district.

“We are aiming at inoculating 3,000 registered healthcare workers today. But we don’t know how many will turn up. But, details of time and session site has been sent to healthcare staff,” Dr. L. Ravi, Reproductive and Child Health Officer and Nodal Officer for COVID-19 Vaccination, told SOM.

Central Govt. Staff  in first round

He said employees of Central Government institutions like Central Food Technological Research Institute (CFTRI), All India Institute of Speech and Hearing (AIISH), Air Force Selection Board (AFSB) and Indian Railways have been included in the first round of beneficiaries to receive Covishield vaccine on priority along with healthcare workers. A circular in this regard has been received by the District Health Department.

Mysuru Division of South Western Railway (SWR) has already initiated vaccine drive for its staff. Employees of CFTRI, AIISH and AFSB would be vaccinated in a day or two.

The Government of India has supplied 20,500 vials which were enough to inoculate healthcare workers in State and Central Government institutions, he said.

The vaccine drive is expected to go in full steam from next week in Private Hospitals and District Hospitals once the second consignment of the vaccine arrives in the district. In fact, Belagavi and Mysuru districts were bigger when compared to other districts after BBMP limits in Bengaluru in terms of population, he said.

Dr. Ravi said those healthcare workers who have remained absent for taking vaccine on Saturday and Monday were given another chance to get vaccinated after the end of first round. But, if they do not want to get it, they should cite reasons why they were rejecting it. The same would be uploaded in CoWIN App. The Government of India wants to know whether it was due to ‘fear phobia’ or any other reasons.

Dr. Ravi said after initial hiccups, the CoWIN App is being upgraded at the main server in New Delhi on the basis of feedback received from various States. The updated Application was likely to have more user-friendly features including allowing re-registration of  beneficiaries.