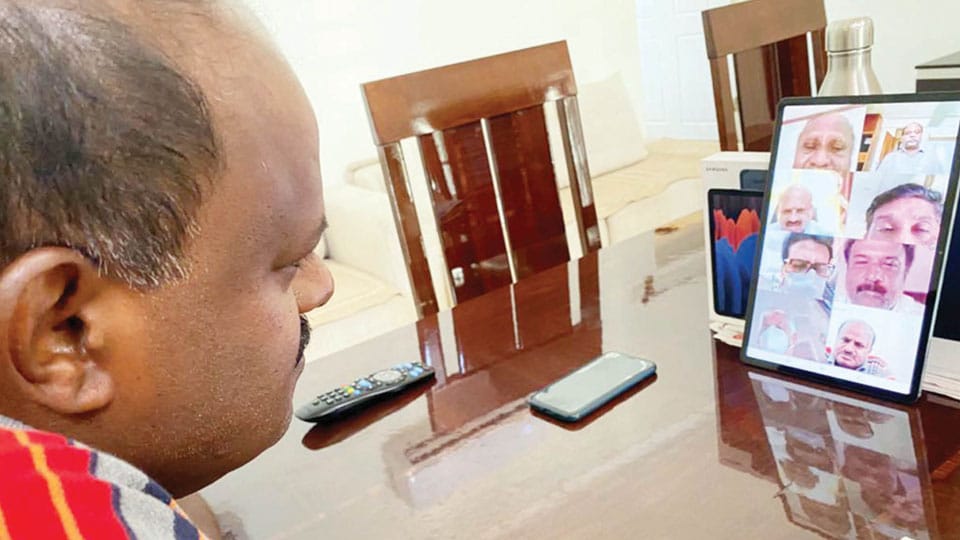 JD(S) MLAs complain about shortage of Oxygen in Mandya Hospitals

Mandya: With COVID caseload on the high in Mandya district, former Chief Minister and senior JD(S) leader H.D. Kumaraswamy held a video-conference with party Legislators from Mandya district on Monday.

Mandya MLA M. Srinivas, who was the first to speak with the former CM, complained about shortage of beds in MIMS (Mandya Institute of Medical Sciences) Hospital. Accusing the authorities of not meeting their assurance on increasing the number of beds by 150, Srinivas also complained about inadequate Oxygen supplies to the district.

He pointed out that the district was getting only 2 to 3 KL of Oxygen when the actual need is about 7KL. He appealed Kumaraswamy to raise the issue with the Government. The MLA also alleged that there were many lapses in testing and that the District Administration had drastically reduced testing in order to curtail figures.

Responding to the MLA, Kumaraswamy said that he was aware of shortage of beds and availability of Oxygen in the district. He lashed out at the DHO, who is on the verge of retirement, for failing to take necessary measures much in advance to ensure that COVID treatment issues are reduced to a minimal.

Maddur MLA D.C. Thammanna expressed concern over rapid spread of the virus in rural areas too. Contending that authorities seem to be reluctant to do testing on a large-scale, he alleged that vaccination has almost come to a standstill in the district.

Urging for appointment of Nodal Officers at the rural level, he wanted the authorities to directly admit people who test positive for COVID, to COVID Care Centres.

Responding to Thammanna, Kumaraswamy attributed the rapid spread of the disease due to the large number of industrial workers and other employed people who used to travel daily from Mandya to Bengaluru for work even when Bengaluru was reeling under the second wave of the attack.

Malavalli MLA Dr. Annadani said that it is satisfactory to note that Mandya and Malavalli have got Oxygen plants. He appealed Kumaraswamy to keep in constant touch with the Government on expediting this Oxygen manufacturing project as it is very vital in this critical times.

Responding to Annadani, Kumaraswamy lauded the Malavalli MLA for singing and dancing along with COVID infected patients at a time when people chose to keep a safe distance from them. He further said that this will instill confidence among COVID affected patients.

After conversing with all the Legislators, the JD(S) leader asked them to concentrate on their health and the well-being of their family members. He also advised them to be always responsive to the plight of the people and also to ensure food and other essentials supplies to COVID-affected and other poor families.