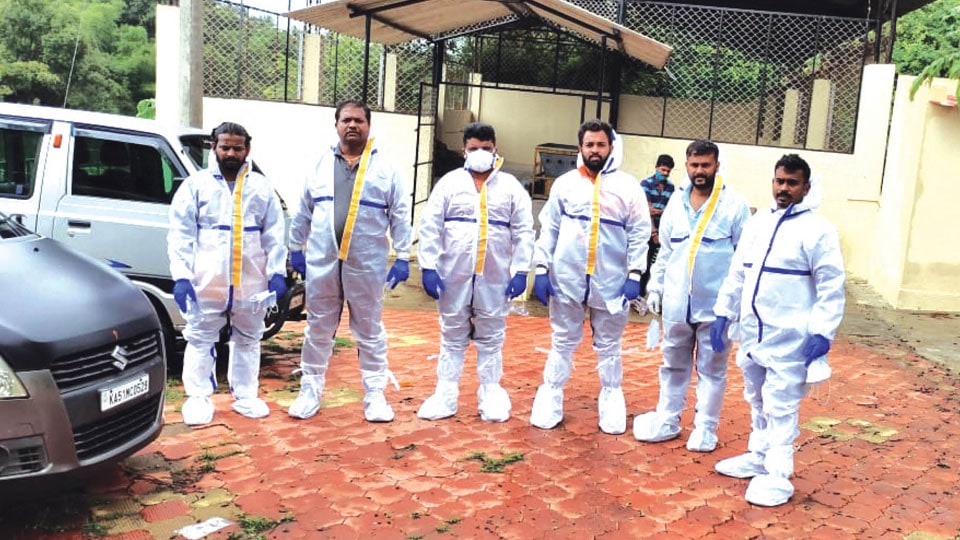 Kushalnagar: COVID-19 is a lonely disease where last rites have become a tragic, solitary affair. At times, families who have lost their loved ones to the contagion are reluctant to perform the final rites and even refuse to claim the bodies of their kin.

That’s where volunteers of the Seva Bharati organisation in Kushalnagar, Kodagu, come in, treating these unclaimed bodies as more than a name tag, a body bag or a cadaver and giving them a dignified farewell. The worst of times have brought out the best among people, as these unsung heroes quietly perform last rites without compromising on rituals, such as the faith of the deceased.

“A man had died after contracting COVID-19 last year and his family was not aware of the protocol. Those were the early days when the caseload was manageable. “Nobody came forward to do the final rites of the deceased person. It was then that we decided to step in and perform the last rites ourselves. This is where we have started and we have been continuing this work even now, during the second wave where the death rate has spiked,” said advocate from Harangi Bharat Machaiah, who leads the Seva Bharati team.

“We have so far cremated 58 bodies in the second wave alone and the numbers keep growing by the day. It is heart-breaking as families refuse to perform the last rites of their loved one who has passed away. We have performed the last rites of people belonging to all communities with the sole intention of giving them a dignified send-off,” he said.

The volunteers do not charge a single rupee from the family of the deceased and perform all the tasks free of cost. Their contact numbers are circulating across the hospitals and crematoriums and they are continuously getting calls from families. Hospital and crematoriums are also approaching them.

The Seva Bharati volunteers have been carrying out the last rites as per the religious practices of the deceased, by following all precautionary measures suggested by the Government and World Health Organisation and they get their PPE kits from the Government.

The team of dedicated workers is on alert round-the-clock and as soon as they receive information on the need to perform last rites, they reach the spot and begin preparations. Not only Madikeri, the team goes anywhere in the district if they get a call and perform the last rites — distance and terrain do not matter here. Before conducting the rituals, the deceased’s family members are consulted to know about the rituals as per their religion and caste.

Along with Bharat Machaiah, the other team members who are doing this noble deed are Navneeth Ponnetti, Rajiv, Dinesh, K.K. Janardhan, Ranjit, P.K. Raghu, Tanmay, Sandeep, Roopesh, Prashanth, Nuthan, Nandan, Akshay, Manjunath, Vinu and Shivaram. “Some relatives do not come even for immersion of ashes. They are scared despite we all knowing that the virus dies in fire. We also perform the last rituals like immersion of ashes where rivers meet after the body is burnt,” Bharat Machaiah said.

“Cremating the dead while wearing PPE suits is difficult especially when the temperatures are rising but the courage and inspiration to offer service comes from within and there is a supernatural power guiding us,” said a volunteer. “We have had to face quite a bit of opposition from our families initially. We have had a hard time making them understand that we are taking all precautions. Even our families are worried about our safety. Now they have started recognising our work and they appreciate our tireless service,” he said.

Apart from doing their routine job in media, a group of journalists performed the last rites of an elderly man who died of COVID-19. Reporters associated with ‘Madhyama Spandana’ that was formed for COVID relief works got a call from a remote village near Parane as local villagers were reluctant to help the victim’s family perform the last rites.

The team comprising Rejith Kumar Guyya, Pappu Thimmaiah, Praveen and Anish and another person Shareen rushed to the village after collecting PPE kits from Siddapura Panchayat and performed the last rites as per the family tradition.

The house was located at a hilly terrain and this did not deter the journalists.

The reporters said that they helped poor people get beds in hospitals and supplied food kits, medicines and other essentials to the needy after spending from their own pockets.

This is for the first time that they performed the last rites of a COVID victim.