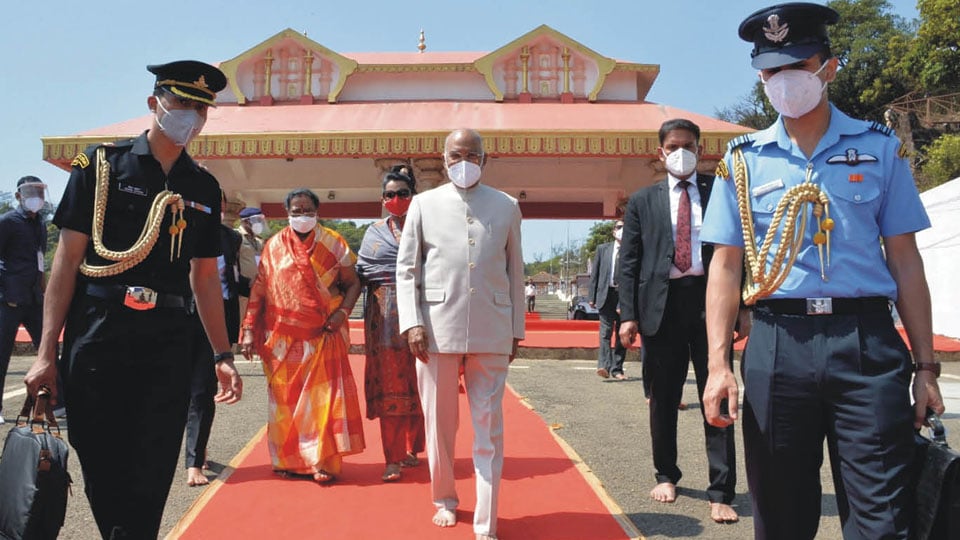 Madikeri: India’s First Citizen President Ram Nath Kovind and his wife Savitha Kovind arrived in Kodagu this morning. An Indian Air Force chopper carried the First Couple from the HAL Airport in Bengaluru to the temporary helipad at Cauvery College Grounds near Bhagamandala. Kodagu District Minister V. Somanna too accompanied the President in the chopper.

From Bhagamandala, the President’s cavalcade drove towards Talacauvery, the birthplace of River Cauvery, the lifeline of people of south Karnataka and Tamil Nadu. The VVIPs were accorded a traditional ‘Poorna Kumbha’ welcome by the priests at Talacauvery. The First Couple performed special pujas at Talacauvery.

The holy place has been taken over by the Indian Armed Forces and the entry of devotees to Talacauvery has been restricted. Red carpet was spread at Talacauvery at the entrance and around the Brahmakundike and the Kalyani. Even the steps leading to the temples of other deities at Talacauvery sported the red carpet.

Kodagu Deputy Commissioner Charulata Somal, Superintendent of Police Kshama Mishra and other officials were present along with officers from the President’s Office. Chief Priest of Talacauvery Rajesh Acharya, Sudhir Acharya and a team of priests including Akhilesh, Prasad and Srinivas performed the pujas and chanted Vedic hymns and mantras. The President’s schedule did not have a visit to Sri Bhagandeshwara Temple at Bhagamandala.

From Talacauvery, the cavalcade returned to Bhagamandala helipad and the chopper carried the VVIPs to the helipad at Field Marshal K.M. Cariappa First Grade College, Madikeri. From there, the VVIPs drove to Club Mahindra Resort on Galibeedu Road where the First Couple will have lunch and some rest.

At 3.15 pm, the President and his wife will arrive at ‘Sunnyside’ on G.T. Road, a museum dedicated to celebrated Army Chief from Kodagu, Gen. Kodandera S. Thimayya. The ancestral house of the General has been converted into a museum and the President will dedicate it to the Nation.

Today morning, Kovind and his wife were seen-off from the HAL Airport in Bengaluru by Co-operation Minister S.T. Somashekar.

An atmosphere of voluntary bandh prevailed in Madikeri since early this morning ahead of the President’s visit. Shops and business establishments in Madikeri and along the route of President’s cavalcade Chettimani-Bhagamandala-Talacauvery were closed as per the directives of the District Administration.

Following widespread criticism after the District Administration asking shops and businesses in Madikeri to down shutters during the President’s movements, the Kodagu DC and SP have clarified that misinformation is being spread on social media.

“Specified routes are being closed in the interests of security and smooth traffic as per protocols and the residents have been informed in advance. “No directions have been issued to citizens to stay locked indoors.We are making all arrangements and efforts to cause minimum inconvenience and minimal traffic restrictions to the public while ensuring the proper safety and security protocols,” DC Charulata Somal and SP Kshama Mishra clarified.

“All emergency services especially medical stores and hospitals remain open. Students who are appearing for examinations have also been requested to come earlier to the venue and all efforts are being made to facilitate their movement to their exam centres. Only shops along the designated routes of the movement have been requested to be closed for a limited period as per security protocol,” they clarified.