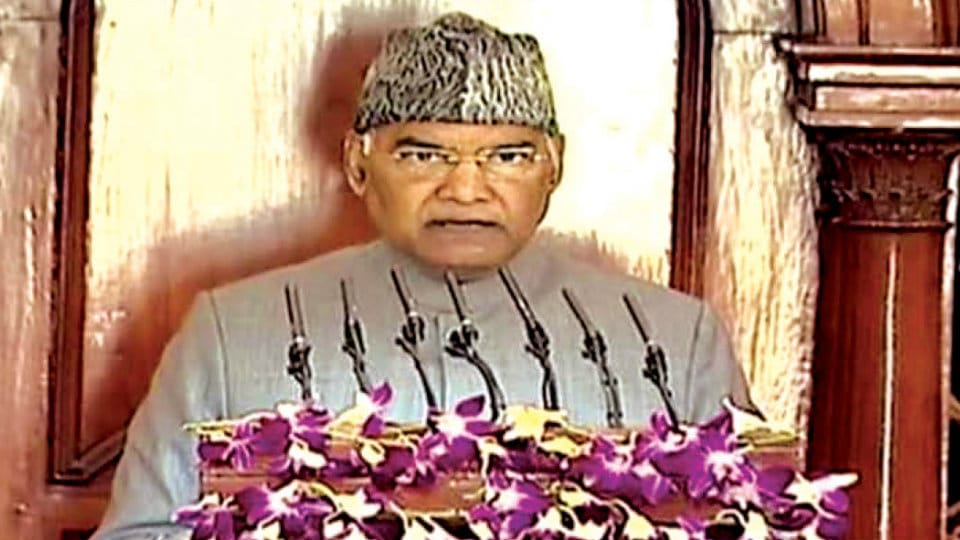 Union Budget to be presented tomorrow

• Session to be held in two phases

New Delhi: The Budget Session of the Parliament began today with the Union Budget to be presented  tomorrow. The budget session will be held in two phases, first phase from Jan. 31 to Feb. 11 and second phase from Mar. 2 to Apr. 3. The Union Budget will be presented tomorrow by Finance Minister Nirmala Sitharaman.

On the first day today, the Economic Survey was tabled in the Parliament by Finance Minister Nirmala Sitharaman, projecting India’s economic growth at 6 per cent to 6.5 per cent in the next financial year starting April 1. The growth in 2020-21 compares to a projected 5 percent expansion in 2019-20.

Earlier, President Ram Nath Kovind, who addressed the joint sitting of Parliament said that the scrapping of Article 370 and Article 35A of the Constitution by Parliament was a historic one, which has paved way for equal development of Jammu & Kashmir and Ladakh.

The President urged the Opposition to engage in debate and desist protests, which he said weakens the country.

While the comment drew long thumping of desks from the treasury benches, the Opposition voiced in protest.

“I want wide-ranging, qualitative discussion on economy in both houses. Our session should be focused on economic matters and how India can take advantage of the current global economic situation,” said PM Modi in his customary remarks at the start of a session.