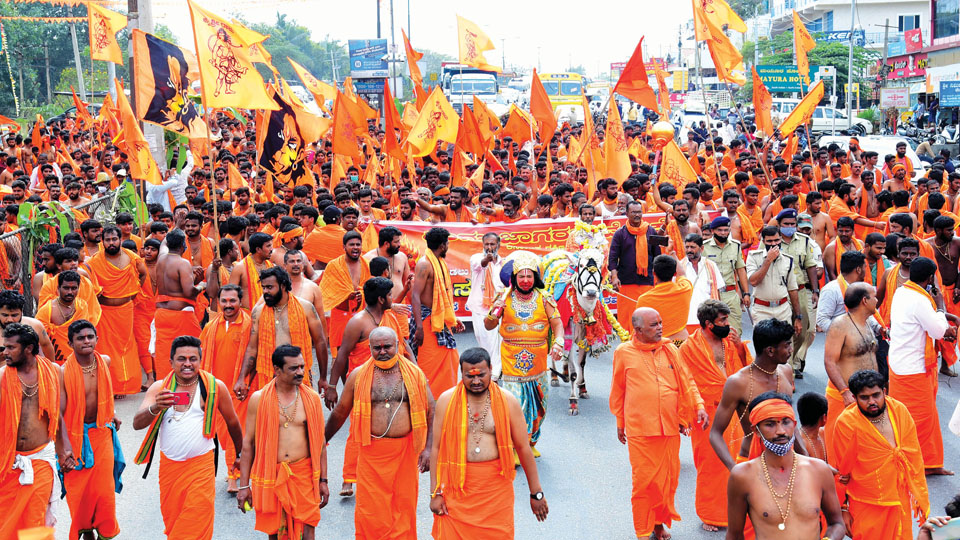 Thousands of Hanuman devotees take out procession in Srirangapatna

The Hindu Jagaran Vedike had organised the procession called as ‘Sankeerthana Yatre.’

The Maladhaaris converged at Hanuman temple in Ganjam near the town, where they performed puja to Lord Hanuman under the leadership of Keelara Nityananda Guru Mutt’s Atmanandapuri Swamiji. Later they marched in a procession along with a vehicle carrying the idol of Lord Hanuman. The procession, after passing through the main roads outside the town, entered the inside of town through East Fort entrance and culminated at the town’s famed Sri Ranganathaswamy temple grounds.

Addressing the Maladhaaris, Vishwa Hindu Parishat (VHP) Mandya District Vice-President Balaramegowda, also a former Additional SP, declared that Moodalabagila Anjaneyaswamy temple in the town will be reconstructed in a year.

He also urged the Government for Pan-India introduction of Anti-Cow Slaughter Bill at the earliest. The entire town wore a colourful look on Sunday with orange flags dotting every space in and around the town.

As the Maladhaaris marched in the procession, people who had lined up along the streets, offered fruits, juices and sweets to them. The District Police had made elaborate security arrangements for the event, with a good number of Policemen deployed all along the route.