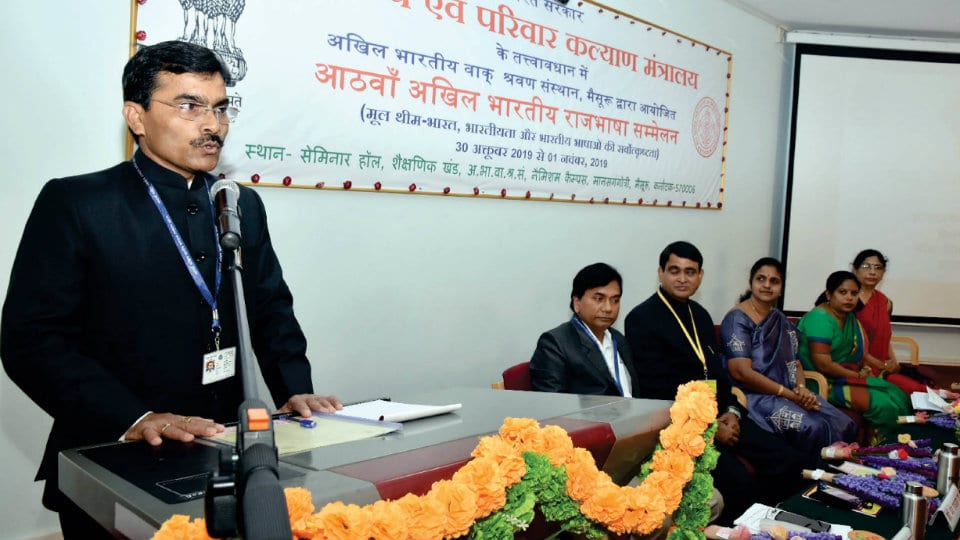 Mysuru: A three-day 8th All India Official Language conference organised by Ministry of Health and Family Welfare (MHFW), Government of India, New Delhi and All India Institute of Speech and Hearing (AIISH) commenced this morning at  AIISH Campus in Manasagangotri here.

About 100 language experts from across the country are attending the conference featuring presentation of papers followed by discussions on various languages.

Inaugurating the programme Dr. Chandrabushan Tripathi, Special Secretary, Public Works Department, Government of Uttar Pradesh, Lucknow opined that the conference was a good platform for language experts to deliberate on strength of various languages. He contended that every language has its own importance and added that all languages deserve due prominence. He said that learning many languages would be an asset for a person to communicate easily anywhere in the country.

Speaking on the occasion, MHFW Director (official language) Dr. Vedaprakash Dubey said that all Indian languages would be brought under one umbrella. He contended that importance of any language could be assessed only through a good study.

Presiding over the programme AIISH Director Dr. M. Pushpavathi disclosed that her mother tongue was Kannada and added that she can communicate in Hindi also along with English. She opined that access to internet helps people learn any language easily.