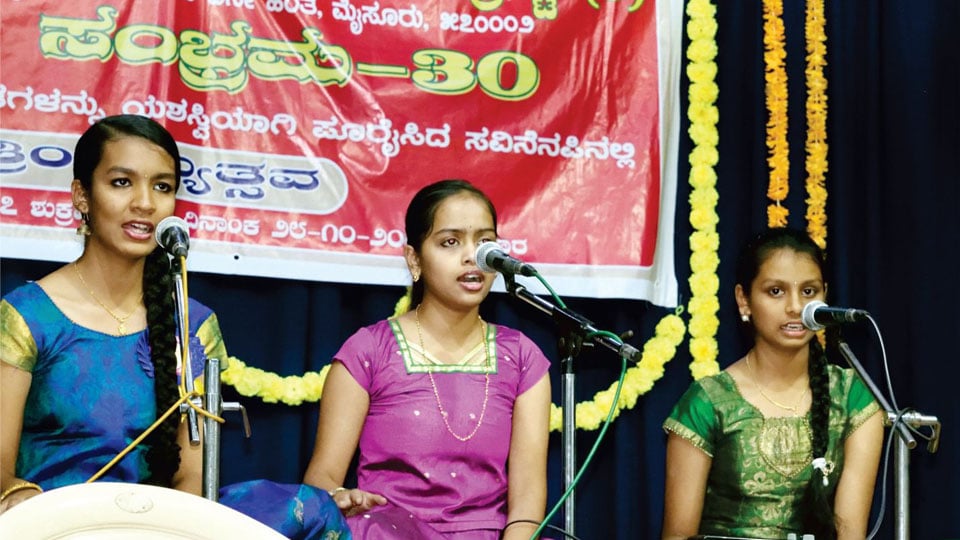 Surabhi, a popular music School of Mysuru has carved a niche for itself. Apart from grooming many a students, it has encouraged them to develop an interest in research, thereby inspiring them to explore new arenas of music. Perhaps this is the specialty of the institution. Many of their presentations such as the operas and Pancharatna Kruti of Tyagaraja, compositions with specific topics like Krishna Leela Tarangini, Dixitar’s Panchabhootha Kshetra Krutis in audio-video-dance and multi-media presentations, demonstrations on different subjects like Pallavis, Gamaka kale, tillana, varnas all have undoubtedly created an awareness and interest among both students and music lovers alike. The Founder of Surabhi, Dr. Sukanya Prabhakar, is the source of inspiration in all its endeavours. 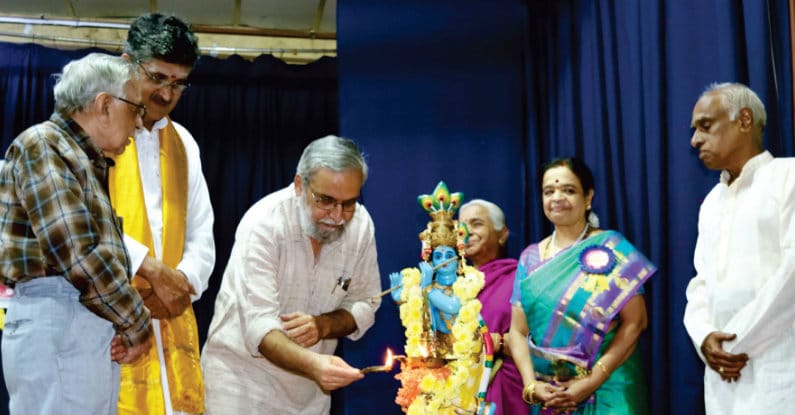 It had a variety of programmes to mark the occasion. At Sri Vasudevacharya Bhavana on the 27th, two CDs ‘Hariyannarasida Vaniteyaru,’ an exclusive compositions of ‘Mahila Haridasas’ were released by Dr. R.S. Nandakumar and Dr. R.V. Raghavendra of Ananya.

Songs of one CD was sung by Vidu. Sumana Vedantha and the other by young and enthusiastic disciples of Sukanya Prabhakar — Harini, Medha, Madhuri and Nityashri. 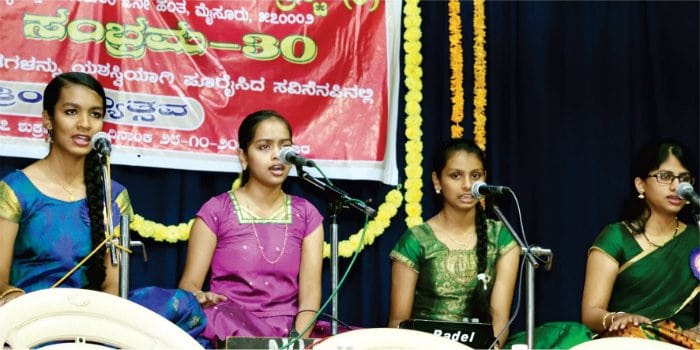 Young and promising vocalist from Bengaluru Vid. Vinay Sharva gave a fine concert after the stage programme. Supported by Matthur Srinidhi on violin, B.R. Prashanth on mridanga and S. Manjunath on ghata, Vinay Sharva engaged the audience for more than two hours.

READ ALSO  Tribute to a musician

K.V. Murthy was the chairperson on both the days.

Releasing of the book titled ‘Sri Muthuswamy Dikshitara Shivapara Krutigalu’ (Compiled by Vid. Malini Ramasubramanyam) on the concluding day of the two-day celebrations.

A special feature ‘Nannolageneevu, Nimmadidaavareyallinaanu,’ written specially for the occasion unraveled Dr. Sukanya’s respect, devotion and influence of Bharat Ratna Vid. M.S. Subbulakshmi on her right from her childhood.

The end of the two days programme was marked by a  Kathak-Bharatanatya performance by Ashwini Sukeerthi and Aparna Shashaank.