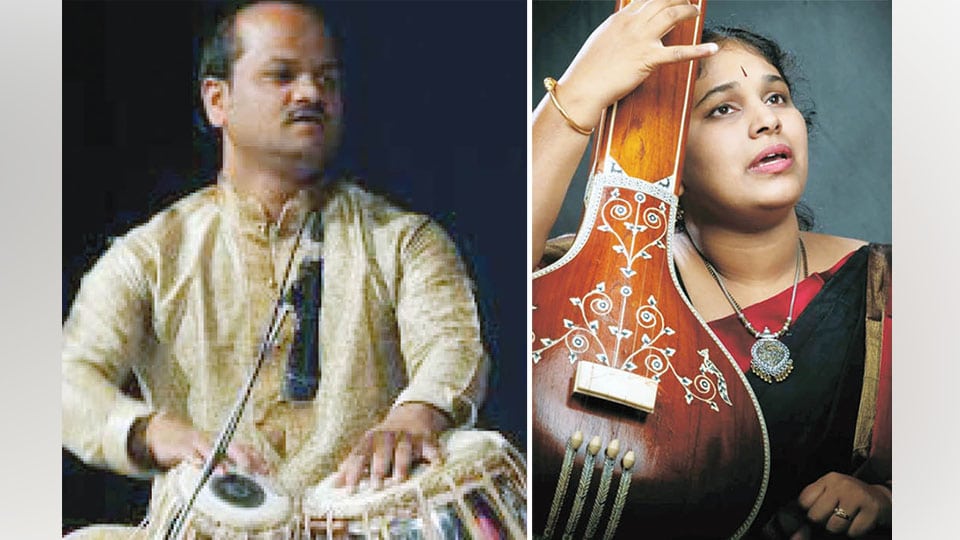 Pandit Avinash Mulye Patil, 35, started training in Tabla at a very young age of five with his father Pt. Pramod Patil, and later under the scholarly guidance of Pt. Umesh Moghe, in Delhi, Airada, Lucknow and Farukhabad traditions. The style of performance of Pt. Avinash is essentially a blend of all  these gharanas.

He holds a Master’s Degree in Music with a gold medal from Pune University, and has also completed Sangeet Alankar from Gandharva Mahamandala, Miraj.

He has provided Tabla support to galaxy of famous and renowned masters of classical music which include Pt. Venkatesh Kumar, Pt. Ronu Majumadar, Pt. Jayatheertha Mevundi, Pt. Rajan and Pt. Sajan Mishra and the list is long.

Vidushi Shrimathi Devi is no stranger in the art circles of Mysuru. Being a resident of the city, she has enthralled the music connoisseurs with her soulful renderings of Hindustani music. Having been trained by Pt. Chandrashekhara Puranikmath, the famous vocalist of Gwalior Gharana in Dharwad, Shrimathi Devi brings out very effectively the beauty and intricacies of the Gharana.

Subsequent training under Vidu. Padma Talwalkar and Pt. Vyasamurthy Katti further enhanced her ability to develop her own unique style of presentation.

She has performed at major music centres of Karnataka and Maharashtra, and also in USA.