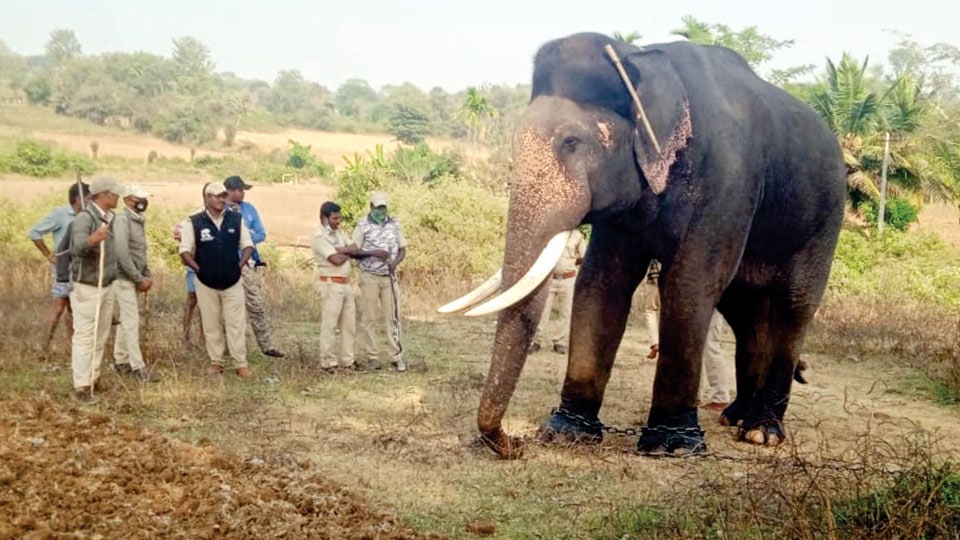 H.D. Kote: The Forest Department staff, who had placed a cage to capture the tiger that has been creating havoc among villagers of Antharasanthe in the taluk since a few days by killing cattle, have begun combing operation to capture the big cat using tamed elephants.

After the tiger had killed many cattle in the outskirts of Antharasanthe village which created a sense of fear among the villagers, the Forest Depart-ment had placed a cage behind Mahadeshwara Temple in the village, where the tiger was spotted.

As the tiger was not trapped, the Forest Department officials, on Wednesday, have summoned jumbos Arjuna and Mahendra from Anechowkur Elephant Camp in Kodagu to conduct combing operation to capture the tiger.

Nagarahole Assistant Conser-vator of Forests (ACF) S.P. Mahadevu said that camera traps installed around the place where the tiger had killed the cows have captured the photos of the tiger and hence villagers have been cautioned not to move around between 6 pm and 8 am till the tiger was captured.

A public announcement using the Department vehicle fitted with public address system is also being made in this regard.

Three teams led by Range Forest Officers (RFOs) have been formed to track the movement of the elusive tiger, he said and added that yesterday morning pug marks were found near the forest area which indicates that the tiger has moved towards      the forest.