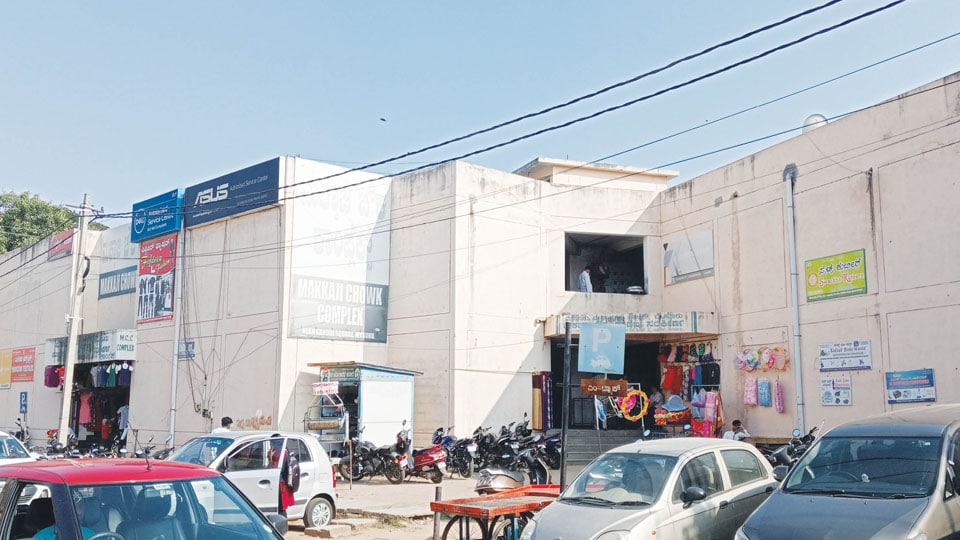 Mysore/Mysuru: Issues between Mysuru City Corporation (MCC) and Traders has led to wastage of taxpayers’ money as no rents are being collected from shops at Makkaji Chowk Complex which was constructed at a cost of Rs. 7 crore about eight years ago using taxpayers’ money.

Even before the MCC and traders at Makkaji Chowk settle their issues and the civic body begins to get revenue in the form of rents, cracks have developed on the walls of this commercial complex due to non-maintenance and there is a fear of the complex collapsing if MCC does not act soon.

Constructed in 2013 by Maverick Holdings & Investments Private Limited, Bengaluru, Makkaji Chowk Commercial Complex has a cellar, ground floor and first floor with a total of 191 shops out of which 30 shops are still vacant. A few, who have been allotted shops, have given them to others for higher rent.

Alleging that the MCC was asking double the rent, the traders have knocked on the doors of a Court, which has resulted in traders not paying rents to MCC since six to seven years. The MCC has fixed the rents based on the present market value, which has caused a rift between the civic body and the traders. This rift seems not to end at present.

With no maintenance since years, the building has developed cracks at many places and even ceiling at few places have fallen.

This apart, bushes and plants have overgrown in the surrounding of the complex and garbage strewn all around. Though there are no toilets and drinking water facilities in the complex, businesses are being conducted regularly.

How to maintain without revenue?

Meanwhile, an official of the MCC Revenue Wing, speaking to Star of Mysore said that though there are 191 shops in Makkaji Chowk Commercial Complex, the traders have not paid their rents till now. How can we take up maintenance of the building, where there is no revenue from it? he questioned.

He further said that rentals were fixed based on the sizes of the shops and even notices were served to the shopkeepers to pay the rent. But the shopkeepers, based on the notices approached the Court and the MCC too has produced necessary information to the Court. We do not know when this issue will be sorted out, he added.

“We are ready to pay rent that is a little more than the previous rent we were paying for the old shops. But we are being asked to pay lakhs of rupees all of a sudden. From where should we get the money,” a shopkeeper said.

He further stated that the shops are not constructed in a proper way. The shops are inside the building and are not visible to the road. “Though we are conducting business since five years, we are undergoing loss,” he added.

We have evicted those conducting business illegally at Makkaji Chowk Commercial Complex and have locked 38 shops. We need to look at from how many years the rents were not paid. Notices have also been served to about 200 persons who were conducting businesses illegally. The issue of rental fixing has been put for discussions before the Council and notices will be served against those who have not paid the rents and the shops would be taken back. — G. Lakshmikantha Reddy, Commissioner, MCC