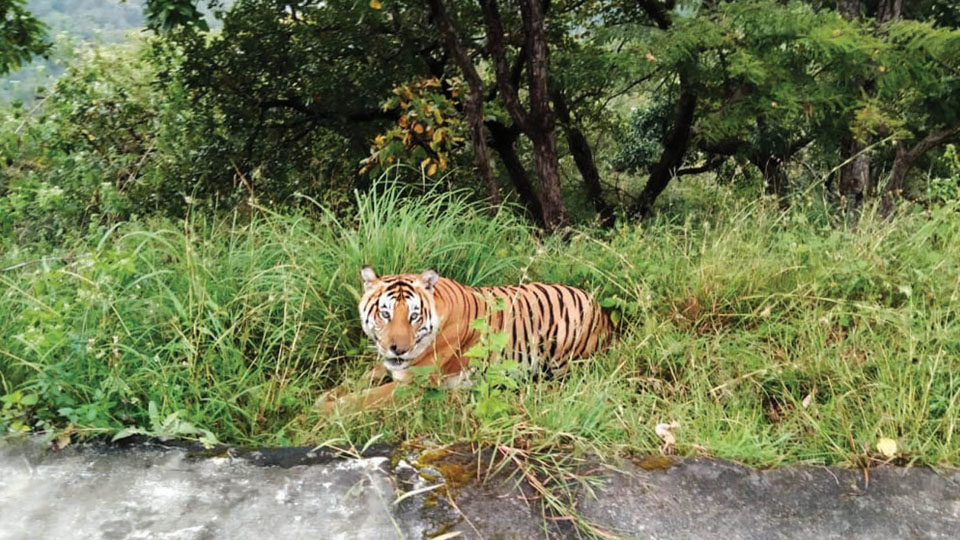 Gundlupet: Tourists, who were returning from Gopalaswamy Hill, were a happy lot as a tiger came in front of the KSRTC bus and sat on the roadside giving pose to them yesterday evening.

As entry of private vehicles is banned to hilltop, tourists and others visiting the Temple atop the Hill have to take KSRTC bus from the foot of the hill. The last bus to the hilltop leaves at 4 pm from the foothill and departs from the hilltop at 5.30 pm.

Yesterday at 4 pm, the bus (KA-10-F-513) left with 35 passengers and was returning back at about 5.20 pm, when a tiger came in front of the bus. Rajanna, the driver, who applied the brakes immediately, informed the passengers about the presence of a tiger on the road. It was indeed an excited moment for the passengers to look at the National Animal.

The tiger, which moved from the road, sat on the roadside giving pose to the passengers by staring at them for sometime before moving back into the forest. Though tigers were spotted through camera traps during tiger census at Gopalaswamy Hill, it is for the first time that tourists have spotted the tiger in this range, which comes under Bandipur Tiger Reserve.

N. Nagaraj Swamy, a resident of Gundlupet, who is deployed as a security at the temple under ‘Pravasi Mithra’ programme, was also travelling in the bus and a witness for the tiger sighting.