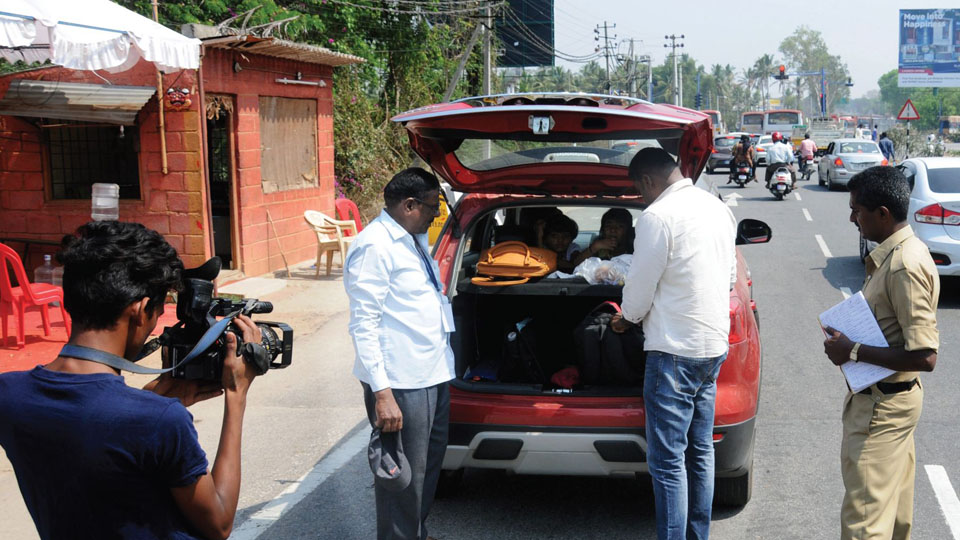 Mysuru: The City Police and Paramilitary forces have taken over the security in Chamaraja, Krishnaraja, Narasimharaja, Chamundeshwari and Varuna that will go to polls along with other Assembly Constituencies in Karnataka tomorrow. The focus is on Chamundeshwari and the authorities are ensuring that voting passes off peacefully and the voter exercises his/ her franchise without any fear.

Security at check-posts has been beefed up. Paramilitary forces, Excise Department officials, Income Tax Department, Police trainees from Karnataka Police Academy and other officials appointed by the District Administration are keeping a hawk’s eye vigil on all the vehicles that are entering the city. Security has been tightened at check-posts on Nanjangud Road, Mysuru-Bengaluru Road and H.D. Kote Road.

Suspicious vehicles are being intercepted and all container vehicles are being checked. A total of 250 out of 935 booths in Chamundeshwari, Varuna, Krishnaraja, Chamaraja and Narasimharaja Constituencies have been declared sensitive and adequate Police personnel have been stationed there. This apart, the jurisdictional Police have also been informed about the sensitive booths.

The Police force will function directly under the City Police Commissioner. Four DCPs, seven ACPs, 15 inspectors, 10 sub-inspectors, 102 Assistant Sub-Inspectors, 274 Head Constables, 498 Constables and 357 Home Guards will be on duty. A total of 1,267 Police personnel will be on bandobust duty. An ACP will be in-charge of three Police Stations under whose jurisdiction the polling booths fall. As many as 7 Sub-divisional Mobile Squads  headed by ACPs has been constituted. There will be constant monitoring of movements of vehicles inside the villages and all the vehicles are being checked.

READ ALSO  Mysuru: A plan for the future

Out of 10 platoons of Central forces, six will be posted in critical and cluster booths, while two will be deployed in strong rooms. The two remaining platoons will be deployed in other booths for security. Quick Response Teams will be ready to rush to the spot in case of any untoward incidents.

Besides the personnel from the Central forces, each critical booth will have a Head Constable for security while a Constable and a Home Guard will be on duty in other booths. About 50 Sector Mobile Squads has been constituted for each of the 20 polling booths. For every three Sector Mobile Squads, a Police Inspector will head a Supervisory Mobile Squad. There will be 15 such Supervisory Mobiles in operation on the day of polling.