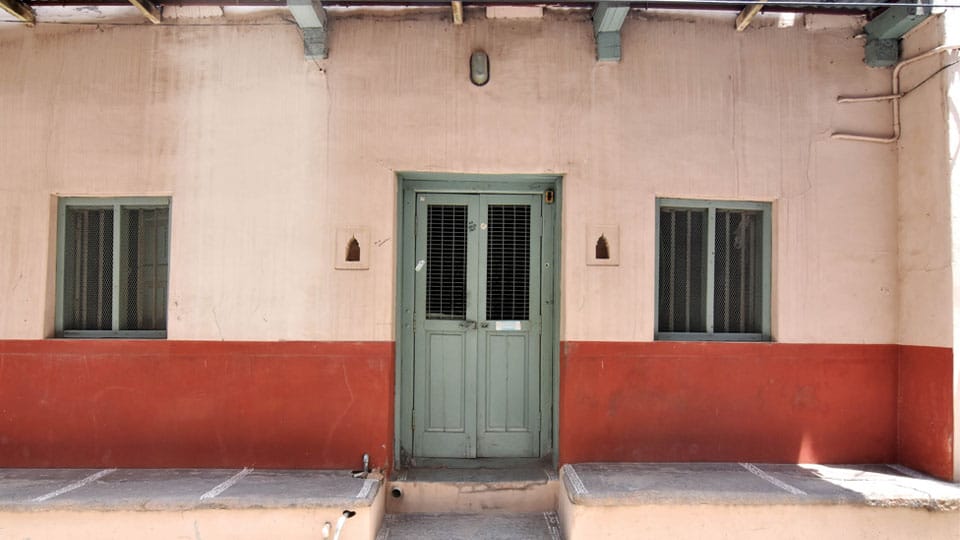 The streets of Mysuru are rich in history and steeped in yore. Hidden within street names are the occupations, owners, and even hobbies of the people who lived there centuries ago. A few of the street names include Kumbarageri, Kurubageri, Bandikeri, Gollageri, Halladakeri, Garadikeri, Thogari Beedi, Agasara Keri, Medarakeri, Budubuduke Keri and Kamatageri. Many houses in some of the streets still have small cavities on both sides of the walls at the frontal entrances to keep earthen lamps — a feature missing in all the newly-built houses. Senior Journalist Gouri Satya discovers the unique and extraordinary origins of street names in this Weekend Star Supplement.

What’s in a name ? Your link to History

In my earlier two articles on Mohallas, Agraharas, Keris and Purams in Mysuru, I briefly mentioned about those places while in the last article, my focus was on Sunnadakeri in Krishnaraja Mohalla. In this article I intend to highlight about a few Keris as their names reveal their past history.

Halladakeri is similar to Sunnadakeri covering not just a street but an area with narrow streets in Mandi Mohalla. Although it is difficult to say how this area came to be known as Halladakeri, going by its name it might have been an area with a vast pit where some small houses existed in the early days when Mysuru was (bounded by) within the Palace Fort.

Unlike a few decades back, today, this entire area has a new look and a new name too. It is now called Mahaveer Nagar. Rajasthani and Sindhi merchants have inhabited here adding a new dimension to the area. Old houses have been replaced with two or three-storey modern structures.

A Jain temple has been built to meet the religious needs of the Jain community living there. One can see them visiting the temple attired in their traditional religious dresses in mornings and evenings conversing in their language, a total change to the days when Brahmin priests were hurrying to the temples in the Palace or for conducting some ceremony or the other in some house, in their traditional religious dhotis. There are hardly one or two Brahmin families now who were the original inhabitants in the Keri.

The area earlier was dotted with traditional houses, having roofs of country-tiles, in which lived Brahmin families. Of them, most were priests and were held in high esteem. They were often invited by Brahmin residents in Agraharas or by Ursu families for one or the other religious ceremonies. A few residents had set up small shops to sell groceries to the residents.

I remember going to that area in the late 50s to my aunt’s old house accompanied by my mother. But when I visited the Keri recently, I was surprised to see the vast change that had taken place. I could meet only one Brahmin resident who was still running a small grocery shop. The sign-board of the shop continued to display the name, “Halladakeri”, reminding one the name the area had in the past. His was the only house of yesteryears, while the rest were new ones. He proudly said his shop was the only place where the old name still existed in the area.

From there when we go to the adjacent Lashkar Mohalla, we come across two Keris – Kumbarageri and Kurubageri.

‘Kumbarageri’ near Ashoka Road was a colony of traditional potters or ‘Kumbaras’ in Lashkar Mohalla. ‘Kumbha’ means pot. For generations, these artisans were engaged in making mud pots, idols and earthen lamps of different sizes and varieties. They mixed clay to a right consistency and made clay lamps by hand, and dried them in the sun before baking and selling them.

When electricity was yet to come, residents in old Mysuru placed earthen lamps in front of their houses to light up the place during nights. There were small carved cavities on both sides of the walls at the entrance for placing these lamps lit with wicks. Such holes may be seen at the front entrances of some old houses now also.

Mud pots sold by these pot-makers were used for cooking and storing water in houses, in addition to copper and brass vessels. Those who could not afford metal vessels used mud pots in their houses. The earthen lamps had a good demand during Deepavali when more of them were lit in front of houses to celebrate the festival of lights.

At one time, there were over 100 potters in this area. They were making as many as 30,000 traditional lamps for lighting houses and for Deepavali. Their number has dwindled to about 30-40 today. They, however, continue to make idols like Lakshmi, Ganesha and Gowri required for festive occasions like Deepavali and Gowri-Ganesha.

As attractive ‘Diyas’ from Rajasthan are flooding the market, demand for age-old traditional lamps has decreased considerably. Similar is the case with pots. Consequently, the pot-makers in Mysuru have almost given up their age-old profession.

Yore stories and your stories…

There is another ‘Kumbarageri’ near Paduvarahalli, an exclusive area where potters were engaged in similar profession of making clay lamps, pots and other earthen ware. This place is now called ‘Kumbarakoppal’.

Here too they produced clay lamps in thousands, particularly for the Deepavali festival. At one time, they were making as many as ten lakh earthen lamps. Over 25-30 families were making these lamps throughout the year. There are hardly one or two now and they make less than 20,000 lamps. Most of the potters and their children have given up their traditional profession and have taken up other jobs.

A place to procure warm Kamblis

‘Kurubageri’, also in Lashkar Mohalla, is another prominent street where resided ‘Kurubas’ or shepherds. They reared sheep and goats. Besides selling well-grown sheep to butchers for supplying meat to customers, they also reared sheep for wool which they would sell to those who wove ‘kamblis’ (rugs of rough variety) or for making carpets.

As machine-woven rugs were not in vogue those days, the humble ‘kamblis’ were in good demand. Their prices ranged depending on their softness. This was an attractive profession for many. Weaving of these rough variety rugs and carpets has almost disappeared today.

Another Keri in Lashkar Mohalla is ‘Garadikeri’, where a number of wrestlers lived. It was a matter of prestige for the wrestlers in Mysuru, who many a few decades ago, used to wrestle before the Maharaja in front of the Palace during the Dasara festival. There were many Garadis, or wrestling houses too, to train these wrestlers and training was given by master-wrestlers.

If we come to Chamaraja Mohalla and Krishnaraja Mohalla on the other side of the city, we come across many Keris. The present Kshetriah Road, which runs parallel to Ramavilasa Road, was called ‘Hale Bandikeri’. It came to be known as Bandikeri probably because bullock carts were parked there, as the very name ‘Bandi’ suggests. Probably, nearby villagers came to this Keri to sell their produce in the adjacent Santhepete.

Later on, this Road came to be called ‘Thogari Beedi’. A number of Ganiga community members, who came to settle down here, had taken to selling Tur dal. In the 1950s and 60s, one could see freshly harvested ‘Thogari’ seeds spread on large mats on this street and its narrow cross lanes. After the wet seeds sun-dried, it was split and sold to the retail traders in Santhepete and other places. However, after a decade or two, they gave up their profession and many moved out of the street also. This street is now called ‘Kshetriah Road’.

Another interesting aspect about this street is Bandikeri coming to be known as ‘Hale’ Bandikeri or ‘Old’ Bandikeri. It began to be called the old, when a new street by the same name emerged in the Chamundi Extension, now a part of Vidyaranyapuram, as the city expanded in that direction, and it was called ‘Hosa’ (new) Bandikeri. Here too bullock cart owners lived offering their carts for transporting goods. This street, however, has retained its name and is called ‘Hosa Bandikeri’ even now.

Close to the Kshetriah Road is the ‘Agasarakeri’ in the Chamaraja Mohalla. It is a cross road to the Narayana Sastry Road. As the name indicates, this street housed laundry men or ‘Dhobies’.

These ‘Agasas’ or laundry men collected clothes from the rich and the royal and returned them freshly washed. As they were accommodated close to the Subbarayanakere tank, they had easy access to water for washing the laundry.

Even today, there are one or two families eking out a living by washing and pressing clothes in their small shops in and around this ‘Agasara Keri’ or the ‘street of laundrymen’. However, of recent, a sign board saying ‘Madivalara Beedi’ has been installed, which also means the Keri of laundrymen.

One of the cross roads to the Chamaraja Double Road is the ‘Bestharageri’, also in Chamaraja Mohalla. Here lived fishermen or ‘Besthas’. They generally went for fishing in the Kukkarahalli Lake, which is about half a mile away. As majority of those residing in the ‘Keris’ were non-vegetarians, these fishermen were selling fish in these places or elsewhere.

‘Gollageri’ is another street in Chamaraja Mohalla. Here resided ‘Gollas’ or milkmen. They kept cows for supplying milk to the local residents.

A street in Vidyaranyapuram area is called ‘Medarakeri’. ‘Medar’ families who made bamboo baskets of different sizes and shapes and other bamboo products were living in this area. They were generally seen sitting in front of their small houses and weaving bamboo baskets of various shapes and sizes.

Similar to these, there are a number of other ‘Keris’ like ‘Budubuduke Keri’ where men who went around seeking alms playing budubuduke (a small drum-like instrument) lived, ‘Vokkalageri’ near Asoka Road, ‘Kamatageri’ in Mandi Mohalla’, and ‘Kakarageri’ in K.R. Mohalla.

‘Vokkalu’ in Kannada means cultivators or agriculturists owning farmlands. May be the community of cultivators, who are termed Vokkaligas, lived there, separating grains from the harvested crop by winnowing. ‘Kamati’ means a worker, generally engaged in construction work.