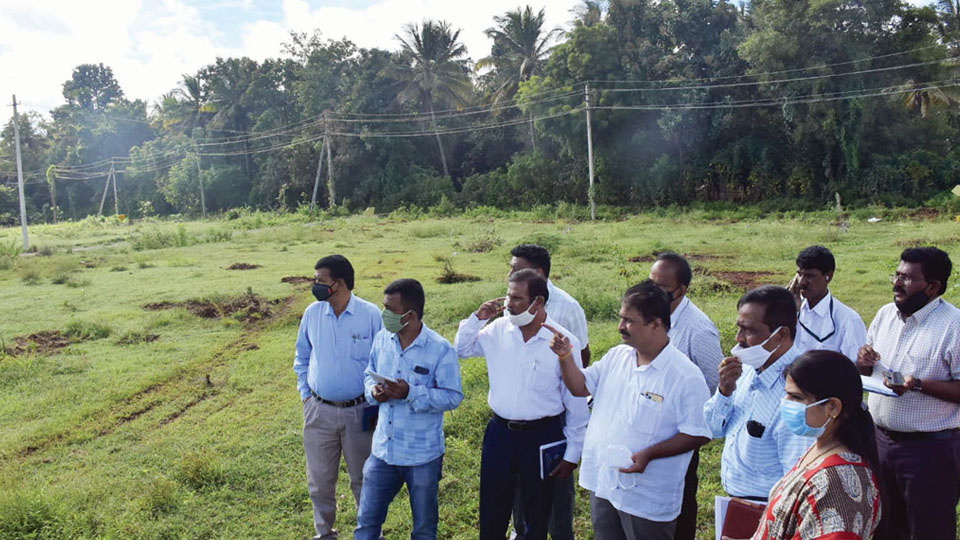 Bungalows on big plots, wide roads and spacious footpaths. These are the hallmarks of Mysuru city for very many years. In old extensions of city, one may find huge bungalows built with plenty of space on all the sides. There were hardly two to three houses on 1-km stretch of road particularly in areas like Lakshmipuram, Krishnamurthypuram and parts of Chamundipuram.

Now, Mysuru Urban Development Authority (MUDA), formerly called City Improvement Trust Board (CITB), thinks it is right time to promote vertical growth with land becoming a scarce commodity in this growing city. The newly-appointed MUDA Chairman H.V. Rajeev has plans to go for vertical growth on its land within Ring Road. His aim is to distribute at least 10,000 sites during his tenure. Excerpts. —Ed

Star of Mysore: Owning a site or house has become a mirage for lots of genuine applicants. How will you help them to realise their dreams?

H.V. Rajeev: For the first time, we are going for a Joint Development Agreement between farmers and MUDA. Land owners will be taken into consideration before requesting them to part with their land. Our plan is to secure land through consent and not through confrontation. One of the main reasons why the previous Chairmen of MUDA failed has been not taking farmers on board as partners in development. Already, first round of talks have been held with farmers of Udbur and surrounding villages. This may fetch around 700-800 acres of land.

Lands are available in different parts and only at one place the MUDA may get around 300 acres. In rest of the places, the total area of land was around 50-60 acres. On each acre, around a dozen sites of various dimensions can be formed.

Star of Mysore: Recently, you talked about Satellite Township. Can you elaborate on it?

Rajeev: A satellite township will have a real meaning if it is formed on a minimum of 1,200 to 1,500 acres of land. The MUDA is scouting for such a land on four directions of the city to go for Satellite Township. Though we have planned for a Satellite Township near Udbur on H.D. Kote Road, land measuring over 1,000 acres was not available at one place as they are found in bits and pieces.

Besides, a few farmers are reluctant to part with their land since they knew nothing except agriculture and such farmers are not being forced to sell their land. We are explaining them the concept of Joint Development Agreement under which each farmer will get nine sites of different dimensions for parting with one acre of land.

Star of Mysore: Last time when MUDA distributed sites was during the regime of D. Dhruvakumar. Why site distribution has become a rare phenomenon for MUDA whose primary object is to form layouts and distribute sites to shelterless?

Rajeev: It is true that after Dhruvakumar distributed sites in R.T. Nagar in the year 2017, site distribution had not taken place since years. Reason for this has been delay in forwarding projects to the State Government and forceful acquisition of land from farmers. Many land owners moved Court questioning acquisition which further delayed projects. Ultimately, many housing projects were shelved as land cost went up. After seeing all these, we have decided to go for Joint Development Agreement instead of acquisition of farm land.

Star of Mysore: Is it true that over 80,000 applications are pending before the MUDA seeking allotment of site or house?

Rajeev: As per MUDA records, around 80,000 applications are pending. However, we do not know whether the applicants own site or house elsewhere in the State. Some of them have been waiting for over three decades. What we are planning to do is to insist those applicants to furnish the Aadhaar details or PAN card number to cross-check their claims of not owning a site or house. Once this is done, a majority of names will be filtered. Then, we will come to know the genuine site or house-seekers.

Star of Mysore: How many sites are you planning to distribute during your tenure and when?

Rajeev: I was appointed MUDA Chairman by Chief Minister B.S. Yediyurappa because of my experience in Co-operative sector. My aim is to distribute at least 10,000 sites and 6,000 flats or apartments. I have plans to develop new layouts even on 50-acre single plot. The formation of layouts and distribution of sites will start within 18 months from the day of layout sanction by the State Government.

Star of Mysore: With land becoming a scarce commodity, do you think vertical growth is the option to meet the growing demand for houses in city?

Rajeev: Seeing the density in Mysuru, the only way to shorten the waiting list is to go for vertical growth. Gone are the days of horizontal growth as more and more people are now opting for high-rise apartments. In fact, this is a good trend as it will be possible for the MUDA to construct multi-storyed buildings with all modern facilities on its land within Ring Road. This will fetch more money for the Authority too. We are going to Bengaluru to interact with Bangalore Development Authority (BDA) authorities to know more about profitability in the construction of flats than allotment of sites. Later, we will take a call on the same after discussing the same in our meeting. The MUDA has around 25 to 30-acre plots at several locations. Best among them will be considered for the construction of high-rise buildings.

Star of Mysore: Private land developers are offering sites at very reasonable price and have promised Cauvery water and UGD connection. Is MUDA committed to provide basic facilities to those layouts formed by private builders?

Rajeev: At the time of giving permission to form private layouts, the MUDA will collect various charges including money to provide drinking water. The money given by private developers is with us. We are committed to give drinking water whenever projects of bringing water from River Cauvery or Kabini are implemented. Till then it is their lookout to make arrangements for drinking water.

Star of Mysore: Why cannot MUDA follow the suit of private developers who offer EMI facility to its allottees?

Rajeev: The MUDA is governed by rules framed by the State Government and we cannot go against it. We will issue a clear title deed on allotment of site with which the citizens can take loan from banks and pay EMI. But, MUDA per se, cannot introduce this kind of schemes to woo people as we have a big list of site-seekers.

Star of Mysore: How safe are documents in MUDA with missing of several files pertaining to site return scandal. How deep is this scam?

Rajeev: Like other Departments, there are black sheep here too. I have asked MUDA Commissioner to refer site return scam to Anti-Corruption Bureau. In order to safeguard our records, we are planning go for digitalisation of records from now onwards. There is no question of sparing anyone. Punishment is sure for all wrong-doers.