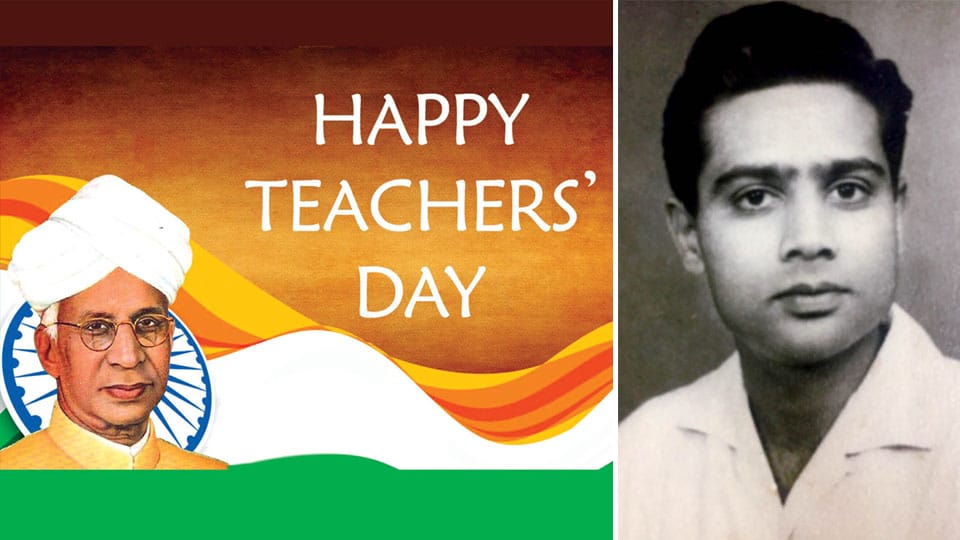 Teachers make us strong and teach us about all aspects of life and the importance of responsibilities. Teachers’ Day is celebrated in India on Sept. 5 to commemorate the birth anniversary of Bharat Ratna, India’s first Vice-President and second President Dr. Sarvepalli Radhakrishnan. On this day, students give special gifts to their teachers. Here is a tribute by a student to his teacher. —Ed.

Unfortunately, my long quest for an appropriate objective correlative, to capture the quintessential late Mirle Vishwanath seems to recede. Being preoccupied with my personal and professional problems, I could not meet him throughout my life after my graduation. That’s a serious regret I have been living with.

Vishwanath was my teacher in The Regional College of Education, Mysore, 1966-70. He hallowed the institution that he served, with his quiet but penetrative presence. Those who were serious about teaching, particularly language or literature, will acknowledge unconditionally that Mirle Vishwanath was one of the brilliant minds they had encountered till he passed away quietly in the early nineties.

He was gentle, dignified and graceful. His attire, elegant and quiet, signifying the man he was, modest, unassuming and unobtrusive. To watch him ride his red Rajdoot or watch him interact with people, you had something to take home, something to emulate. He didn’t preach, he just lived.

As a student I remember, he walked rather briskly to the class, with long strides in his ‘voiceless’ shoes, with a gentle stoop, and a sense of urgency. For a man who was so gentle, this was a bit of a contrast to the stillness that seemed to reside deep inside him. As he entered the class, you smelt the aroma of the Panama cigarette that he had just flicked across. But once he started to speak, you were treated to the music of ‘Received Pronunciation’, with no flamboyance.

Whether he spoke on Aristotle or Edward Albee, synchronic or diachronic study of language, Vishwanath was sublime. You would feel the depth of his ideas, insights and critical judgement only after you reached home and began to masticate it.

His critical acumen commanded the respect of his contemporaries such as Dr. Rajeev Taranath, a thinker and an artiste of repute and Dr. U.R. Ananthamurthy, a significant writer of our time. I don’t remember any ideological slant in Vishwanath. You wouldn’t see him in any highly publicised anger against the privileged nor would you hear of any concern for the deprived. But deep down, he was a great humanist.

What a revelation of the man he was, the humanist. We, the senior students of language and literature, went to Bangalore to visit the Regional Institute of English, then situated in Cunningham Road. Vishwanath accompanied us. It was late in the evening when we reached. While the girls were dispatched to a hostel, boys remained in the bus and Vishwanath settled into a room in Hotel Brindavan on M.G. Road.

We boys had a hilarious night of total freedom. Some roamed the streets while some watched ‘Seven Wonders of the World’ in Kapali. The next morning we went to the hotel for breakfast and we waited for Vishwanath. And he did, promptly, at the appointed hour.

As he got down from an auto, we saw him, looking imperial, dressed in a greyish black suit, a matching flowery tie, neatly settled on his spotless, pure white shirt. Vishwanath had a style of his own. He was clean shaven, more brownish than fair in his complexion, combing his short hair backwards with no parting. He sat at the head of the table, giving us his impish smile on and off, as he had his breakfast with us. We looked at him admiringly.

The boy and his expressions

When we were about to pack up after breakfast, a boy appeared to clean up the table. His arrival was in some way, arresting. Buffeted badly very early in his life, the boy bore a sombre look, a look of self-imposed responsibility, it had given him a kind sensitivity and dignity that didn’t go well really with his tender age. He looked like a boy who had run away from home in his village. It could not be by a fatal attraction to the city that he came, but by a desire to earn a living, to be less of a burden and be a bit of a support to his struggling parents.

He had a lost look on his innocent face. He began to work on the table, diligently but abstractedly and by accident he dropped a bit of chutney on to the lap of Vishwanath. The black and white contrast was glaring. The boy was aghast, the enormity of his ‘irresponsible’ act had shaken him. He stood there, petrified, trembling like a dried up leaf, waiting for a volcanic reaction from the man-imperial.

The beads of perspiration had merged with his tears. We, the boys, sat there, gaping at the monumental blunder of the innocent. But Vishwanath sat there, unaffected and unmoved by the event and with the oriental calmness that was so natural of him. As we watched, he mechanically, bringing the pointer finger and thumb of his left hand together, and with the dexterity of an ace carrom player, smote the mound of white substance off from the lap of his trousers. Dipping his pointer finger in a glass of water in front of him, Vishwanath cleared the white stain from his lap, with no fuss. It was then that he looked up at the disfigured face of the boy.

Placing his hand gently on the boy’s shoulder, he assured him not to worry. This time again, the boy shivered and teared, but was moved by the sterling act of kindness from the man he had not known and then he vanished. For us, the boys, sitting round the table and watching the incident, his gesture was a moment of enlightenment, a moment of awakening, a lesson of how one’s conduct should be with the less privileged and marginalised.

As I reflect upon the episode, I wonder if there was a confluence of all religions that preached humanity, as he brought together the two of his fingers to smite the mound off. I’m not sure, or was there any anger against the privileged in his act? I doubt it. But when I watched him place his hand on the shoulder of the boy to comfort him, I saw the humanist.

When the news of the passing away of Mirle Vishwanath came, there was a long silence and a continuous flow of tears for a long time. It was not a sob. A sob would not have suited Mirle Vishwanath. Years have gone by since his death in the nineties, but the people in Mysore, who were privileged to his attention, listen to his silence even now with rapt attention.