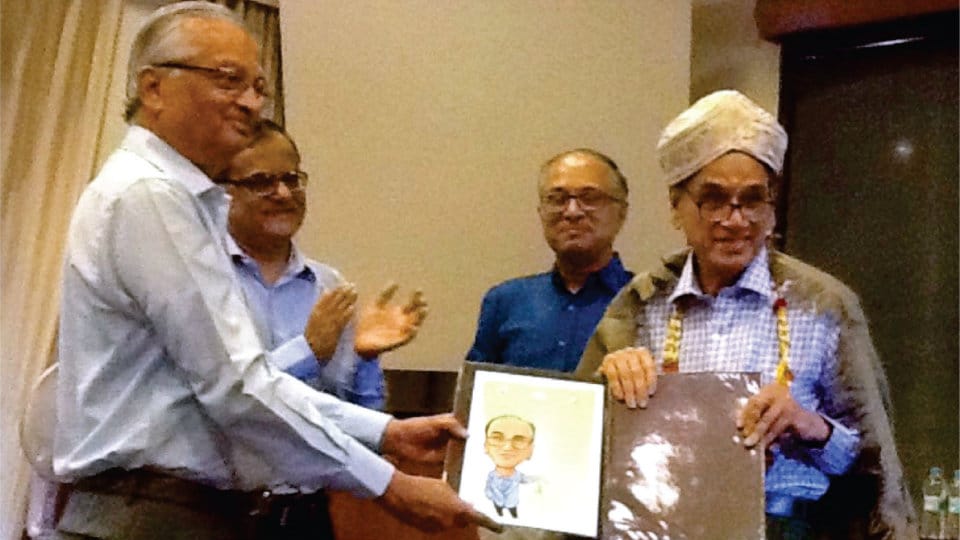 Dr. K. Kasturirangan, former Chairman of ISRO, the Chancellor of Jawaharlal Nehru University and the Chairman of Karnataka Knowledge Commission;  Prof. Kakodkar, former Chairman of AEC and the current President of the National Academy of Sciences, Allahabad; Prof. Ajay Kumar Sood, President of the Indian National Science Academy, New Delhi; Prof. Ram Ramaswamy, President of the Indian Academy of Science, Bengaluru;  Prof. K.L.Sebastian, Chairman, Joint Science Education Panel and a galaxy of distinguished scientists spoke about the contributions of Prof. Srinivasan, who is known as the Father of Cryogenics in India.

They honoured him for his vision, dedicated service and guidance in conceptualising and developing the Experimental Physics Refresher Course using low cost kit to propagate Physics education in the country.

He has conducted 86 Refresher courses, each lasting about two weeks, travelling across the length and breadth of the country. The speakers said that his service to Science Education programme as Course Director from 2001 to 2017 was outstanding.

Dr.  Kasturirangan said that he could not think of another scientist in India who had dedicated and contributed so much towards taking science education to the nooks and corners of India like Prof. Srinivasan.

He said that the country should really appreciate Prof. Srinivasan, not by giving another bouquet, but by making Srinivasan’s vision of improving Science education in all the educational institutions throughout India.

He said that Karnataka Knowledge Commission had enough funds and that the Science Academies and Prof. Srinivasan should take science education to every nook and corner of Karnataka.

He further said that a book should be written about Srinivasan. All the people who spoke about Prof. Srinivasan’s hard work, commitment to the project and dedication to perfection, joked whether it would ever be possible for Srinivasan to retire.

The students talked about how he inspired them by being an example, giving every student his time and helping them with the experiments. The participants from Utkal University, Orissa called him a Gyana Yogi and earlier at a function, the eminent physicist Prof. G. Venkataraman, had called him a Karma Yogi.

People who listened to Prof. Srinivasan’s speech at the function were amazed by this great intellectual’s humility, honesty and simplicity. One could see by the crowd applauding him that he was loved by everyone who came in contact with him though he was a very hard taskmaster!

Srinivasan fulfilled his every role in life — a brilliant and dedicated Scientist, a committed academician, an able administrator and a loving family man — to perfection. It was rightly pointed out that his wife Radha’s support was a great factor in Srinivasan being able to spend all the time in his lab and achieve his life’s goal — science.

While Srinivasan is a Scientist, Radha is a very talented artist. Their home is full of the paintings and other creations by her.

Srinivasan, this young octogenarian, can be seen (when he is in Mysuru) walking along Kalidasa Road, absorbed in his thoughts about Physics, to the Railway Station or his bank in Yadavagiri or the Vontikoppal Post Office.