Home » Feature Articles » Tour of India Team 2 to Sri Lanka. Was it necessary? 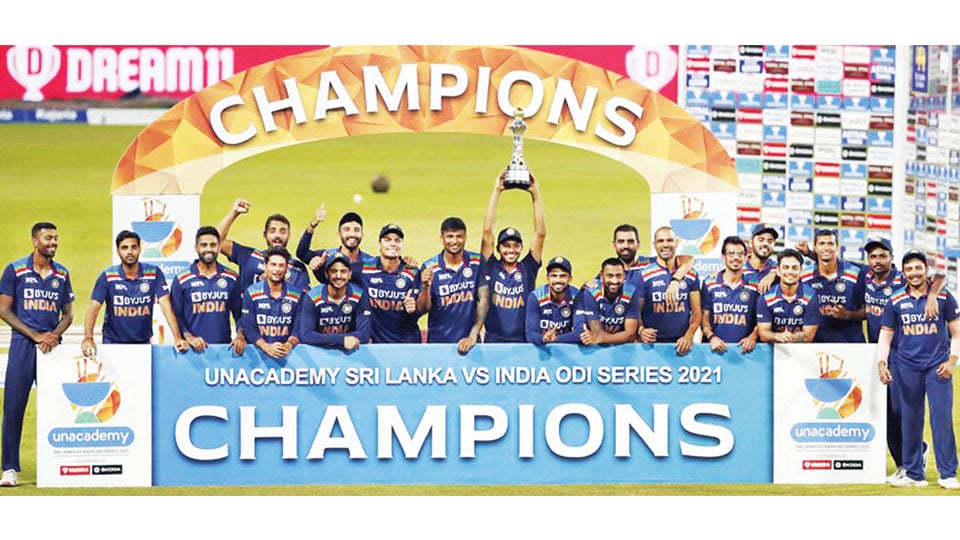 Tour of India Team 2 to Sri Lanka. Was it necessary?

BCCI sending Team 1 to England for traditional Test Series and Team 2 to Sri Lanka for limited overs cricket seemingly lacked maturity. Yes, benevolent disposition of BCCI towards the ailing economy of Cricket Sri Lanka was in good taste; but it boomeranged in terms of quality of cricket played. Our boys looked absolutely pedestrian in the 2-1 ODIs and 2-1 T20s. And yes. I had the belief that India is now capable of blooding in ‘Two Teams of International Class’. Going by the results here, we have a long way to go I am afraid.

Rahul Dravid’s contingent looked strong on paper; although Arjuna Ranatunga dismissed the side as far too low by international standards. Sri Lankans themselves have not recovered at all after the exit of stalwarts like Sanath Jayasuriya, Lasith Malinga, Kumar Sangakkara, Mahela Jayawardene, etc. Young SL batsmen are grooming but yet to achieve international class. In such a scenario, cricket lovers in India and across the world expected India Team 2 to register emphatic series victories both in the ODIs and T20s. Expectations were belied grossly — all due to poor quality of the games played.

My good friend Bapu Sathyanarayan called after the ODIs — “Hey Prasad, how do you rate this 2-1 series victory?” I said, “Providential. In the 2nd ODI, chasing 277, we were 116 for 5 having lost our top order. Had our fast bowler Deepak Chahar not scored 69 in partnership with Bhuvi, we would have lost the match and eventually the series. We were lucky.”

READ ALSO  Upgradation of stretch between Kalamandira and Mosque: A Design Engineer’s Perspective

We could not have expected a better coach and manager than Rahul Dravid to inspire young guns. But most looked incompetent. Poor and sketchy performances, Gavaskar’s ire, Dravid’s defense, COVID et alia, it was a boring series wherein golden opportunities were squandered; much to the embarrassment of Dravid.

However, congratulations to India Team 2 on lifting the ODI trophy and the Sri Lankans on lifting the T20 trophy. In the right earnest, there were discussions on individual performances, maturity and consistency.

Prithvi Shaw: His stroke play is delightful to watch, no doubt. But bowlers at international levels watch videos, strategise ploys to get him. Excessive back lift and urgency to score makes him vulnerable against outgoing deliveries. Good that he has been called over to England. But he needs tremendous patience to build an inning.

S.K. Yadav: He stroked the ball well and confidently. Is a powerful young lad. With a bit of mind training for big occasions, he could well be a Damien Martyn for India. He is a brilliant fielder. Good that he also has been called over to England. Best to him.

Sanju Samson: He was found wanting in IPL. When he scores, his knocks are like poetries; with flowing drives and pulls. When set fully looking at big scores, he throws away his wicket with gay abandon. In both the IPL and in Sri Lanka he just did that; much to the disgust of many.

Manish Pandey: Sorry. He is in limelight for pretty long time. With the chances that he has been offered, he should have been a certainty in India A Team — let alone in Team 2. The way he got out were far too unconvincing for an experienced batsman like him. He needs to do a lot of introspection.

Hardik Pandya: Is he a fast fading star? Is he physically fit fully after his back injuries? A star who was expected to fill the slot of a genuine ‘All Rounder’ in Team A seems to be fading away and quickly. Every dismissal was awkward. He needs to talk to himself.

Ishan Kishan: On debut, facing the 1st ball, this kid smote it for a six. Looked good. Congrats to him on scoring 50 on debut. The inning lacked grace and what followed in the next match was mere writing on the wall. Bravado does not work at international levels my friend.

R. Chakravarthy, K. Gowtham, Y. Chahal: None looked to trouble any of the SL batsmen. They were all mediocre to say the least.

Having summarised the much avoidable tour, our concentration is on our National Side at England. Wish the team all the best.