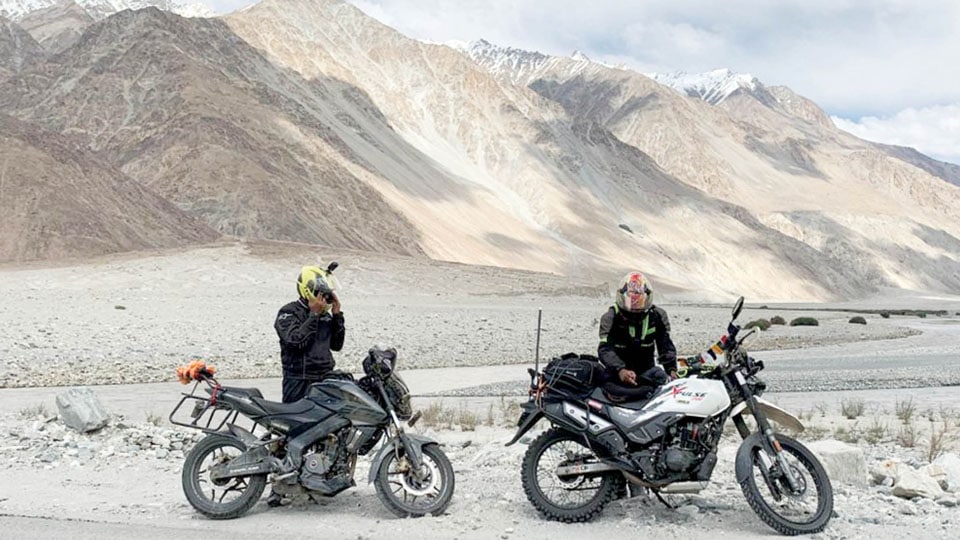 Two friends from the Heritage City of Mysuru —Chaitanya and Sagar Avina — have attempted to make it to the Indian Book of Records after riding on two bikes from Kashmir to Kanyakumari in three days and 17 hours.

For the record attempt, Chaitanya and Sagar left Kashmir on July 11 at about 9 pm on Hero XPulse 200 and Bajaj Pulsar NS200 bikes and reached Kanyakumari on July 15 at about 2 pm, covering a distance of about 3,700 kilometres.

“The bikers’ paradise, Ladakh trip started from Manali with a plan to reach Sarchu crossing the most beautiful Atal tunnel and Rohtang Pass. Crossing so many hard paths, we were able to find a shelter in the freezing cold weather at Zingzing, a few kilometres before Sarchu. The difficult ride was in Uttarakhand. It was raining heavily since six hours and we had to ride at a speed of between 30 and 40 kms. We experienced difficulties in Uttar Pradesh too,” said Chaitanya.

Travelling an average 900 kilometres a day, the duo did not sleep during the record attempt, but instead took rest for about two to three hours during nights at roadside dhabas and continued with their journey.

“Sometimes, we could not find a place to rest. We had carried a tent which we used to pitch in petrol bunks and refreshed ourselves before taking rest for some time and resuming the bike journey,” Chaitanya disclosed.

Recalling an incident, he said that while riding in Jammu, the antenna fixed to his bike which was carrying the National Flag brushed against another vehicle during a traffic jam, causing a commotion. But a traveller from Punjab intervened and sorted out the issue, he added.

Riding from Kashmir to Kanyakumari, one has to be ready to face breakdown of vehicles and hence these riders had carried brake pads, clutch units, throttle cables, chain lubes and puncture kits including emergency tools. “The first breakdown was in Ladak, where the clutch plate was burnt while crossing a stream. The journey resumed after I replaced the burnt clutch plates. The second breakdown took place in Agra, when the brake pads of the rear wheel got damaged. After that, there were no issues till we reached Kanyakumari,” Chaitanya sighed.

He said that the record attempt has been accepted and verified by the Indian Book of Records and they are yet to receive the Certificate.