Vehicular congestion in Central Business District (CBD) is escalating day by day. This has started to very adversely impact heritage, commerce and tourism of the city in general and of the CBD in particular.  There is a feeling among the public that shop owners park their vehicles opposite their shops all through the day which worsens the congestion on these roads.

Mysuru City Corporation (MCC) has been threatening, though meekly, to remove all  cellar shops, as they were meant for the parking in the first place. Further, MCC has been contemplating, for ages though, to introduce ‘pay and park’ under the premise that such a step would take away the lure of reckless day-long parking, which it considers to be the main reason for the traffic congestion in the CBD.

As part of Mysore Grahakara Parishat (MGP)’s Traffic Study Project, it was considered essential to meet the merchants in CBD to have their side of the story. 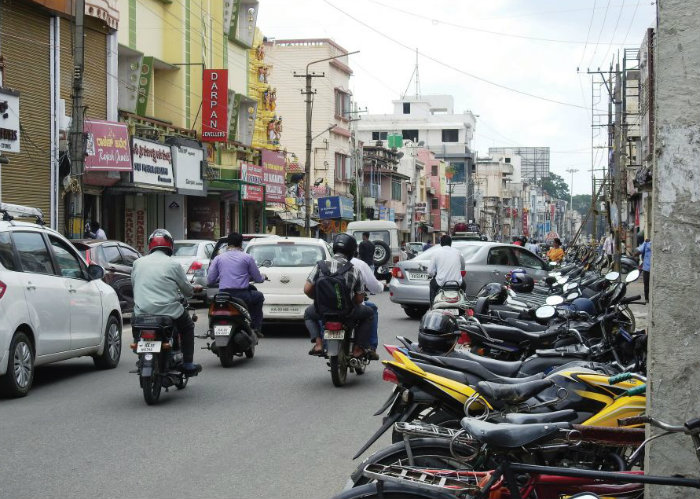 A.S. Satish, President, Mysore Chamber of Commerce and Industry (MCCI), organised a meeting with its members to interact with MGP on this crucial issue. The outcomes of this meeting were quite revealing.

A few members justified road side parking of their personal vehicles in front of their shops, as they contended that since most of them live away from CBD  they are compelled to bring their vehicles to the city centre. Their question was “what has the MCC done in fulfilling their requirement of a parking space.”

Merchants have been suggesting that open spaces behind D.D.Urs Road or on JLB Roads be developed into multilevel parking. Nothing has been done in this regard. On the contrary some of these places have been used for building huge public buildings which themselves generate a lot of additional vehicular congestions. Even the Town Hall Multilevel Parking is remaining in limbo due to total mismanagement by MCC.

With regard to MCC’s cellar-clearance drive on DD Urs Road, merchants feel that it is only a deflective tactics to cover up MCC’s failures. They point out that cellar in MCC’s own buildings in the heart of the city, namely K.R.Cirlce, houses shops rented out by MCC. They point out that even if one takes a very legalistic view on cellars, the fact remains that most of these cellars are neither capable of being used as parking lots nor they have any access as entry and exit points due to very small sizes and the contours of the road on which these buildings are built.

Business in the CBD area is very adversely affected due to vendors occupying the footpaths on Sayyaji Rao Road, Gandhi Square, Harsha Road and elsewhere. The attitude of the authorities concerned such as MCC and Police, in this matter is subverting their faith in rule of law.

Merchants are prepared to create a car-pool among themselves to overcome this problem, provided MCC comes out with a genuine parking solution in the CBD. Merchants are even prepared to accept declaration of “No Vehicle Zone” on pre-decided days /dates on random selective basis in the CBD.

They offer to create an electrical-vehicle chain services for the customers in their area if that could enhance their business prospects and solve vehicular congestion.

Two-hour-long deliberations with the leading members of the MCCI gave an impression that with such a positive attitude on the part of the businessmen, there is great hope to come to some practical solution to the vexed problem of vehicular congestion in the CBD. However, the real solution may lie in the hands of authorities, both the administrative and people’s representatives, in MCC.