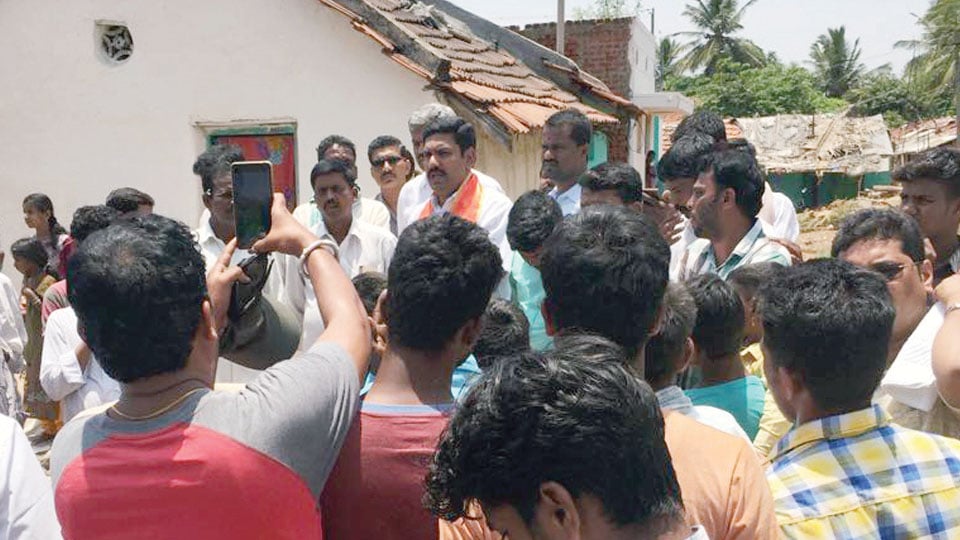 Election in a democracy is the season for migrants. Like birds and animals migrate from one location to another during certain seasons and for certain reasons like drought or forest fire, smart politicians too migrate from one party to another. They are the ones who know which side of the bread is buttered!

In Mysuru district, the political leaders at the Constituency-level have started sending signals and spreading wings to cross-over to one of the three leading parties — Congress, BJP and JD(S). As we know, among the 11 Constituencies in Mysuru District, only Varuna and Chamundeshwari Constituencies are making news because of the candidates from the Congress and the BJP who are contesting here.

In Varuna, Chief Minister’s son Dr. Yathindra Siddharamaiah was the early bird and everyone thought it was going to be a cake-walk for him as the BJP was not finding a matching challenger to fight him. We must see if the early bird gets the worm!! BJP’s star candidate of 2008 election in this very Constituency, former IPS Officer L. Revanasiddaiah, soon deserted BJP, and paradoxically held the hands of Siddharamaiah against whom he lost.

As for Chamundeshwari, Siddharamaiah had won it by a whisker, 257 votes, in his first contest here after quitting JD(S), as a Congress candidate in the by-election of 2006. The other two elections he fought from the neighbouring Varuna Constituency in 2008 and 2013 Assembly election and won hands-down with a very comfortable margin of 18,837 and 29,641 votes respectively. Surprisingly, this time, for 2018 election, he has sacrificed such a safe seat for his son Dr. Yathindra, taking a BIG risk in Chamundeshwari where his once friend, now turned foe, G.T. Devegowda, an old electoral war-horse is contesting from JD(S).

It is in this context, Varuna becomes important for the political parties. In the early days, it was presumed by many political pundits and also the voters of those two Constituencies that while Varuna would go to Congress, Chamundeshwari would go to JD(S). While a dummy BJP candidate would be fielded in Chamundeshwari to help JD(S) to defeat Siddharamaiah, in Varuna both BJP and JD(S) had almost come to accept the reality, but, as a ritual, wanted to field some one as a proverbial sacrificial goat. That was how Abhishek from JD(S) entered Varuna and no one is even mentioned from BJP for Varuna. 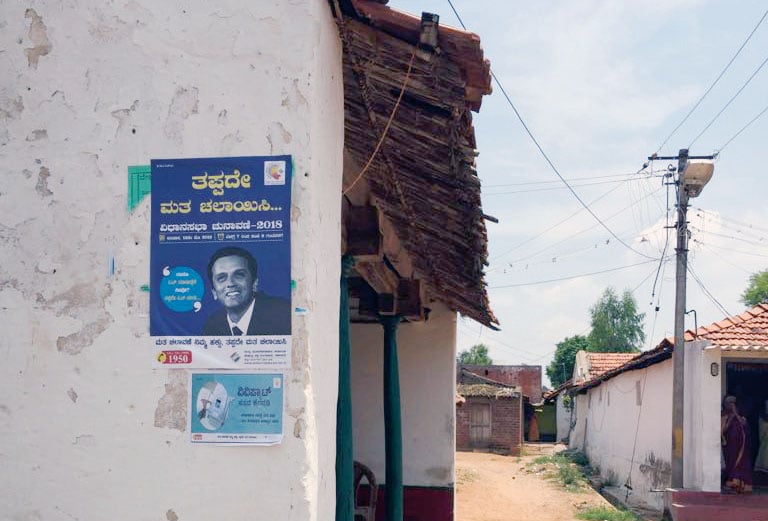 An apology of a poster, with Rahul Dravid as the Brand Ambassador, urging people to vote, is pasted on a village wall by the Election Commission.

And then suddenly this equation changed in both Chamundeshwari and Varuna. Sensing inevitable defeat in Chamundeshwari, Siddharamaiah was asked to contest from North Karnataka’s Badami of Bagalkot district — like wisely having two strings in the bow. And as for Varuna when everything looked hunky dory for Dr. Yathindra Siddharamaiah, there entered the ‘dragon’ in the person of B.S. Yeddyurappa’s second son B.Y. Vijayendra. He is academically well-qualified, young, smart, humble and rather soft-spoken. Though a debutant for electoral politics like his rival Dr. Yathindra, he is bursting at the seams with confidence. Because of his late entry into the Constituency, naturally he is making both news and waves. Therefore, I decided to follow his campaign trail yesterday and got an old BJP contact to help me. I was told Vijayendra and his wife Prema were busy performing Gruha Pravesha puja in their new house in Varuna and then he would welcome migratory political birds at a city hotel.

READ ALSO  Modi’s march of victory: Here is the checklist for five years...

I simply rushed to the hotel only to be caught amidst over 200 villagers in a hall — taking selfies, party leaders putting BJP stoles over the shoulders of the new entrants, swearing loyalty, assuring victory, garlanding and a brief speech of welcome by Vijayendra.

Thereafter, the safari began and I followed his vehicle. Surprisingly while there were many cars in front of the hotel, when we reached the first village Kasaba Halamboor in T. Narasipur taluk, there were only four cars and mine was the fifth! There was a vehicle of ‘Government of India’ for the Election Commission officials to keep watch if any Model Code of Conduct is violated and they were videographing the whole activity. There was Police vehicle for security and to maintain law and order. My driver was asked about my vehicle and its occupants. I had carried my Press Accreditation Card which helped but the driver was asked to put a PRESS sticker on the front windshield immediately and it was done. The campaign indeed was under strictly controlled condition and I liked it. No ugly posters, no litters in the villages, nothing irritating or offending. 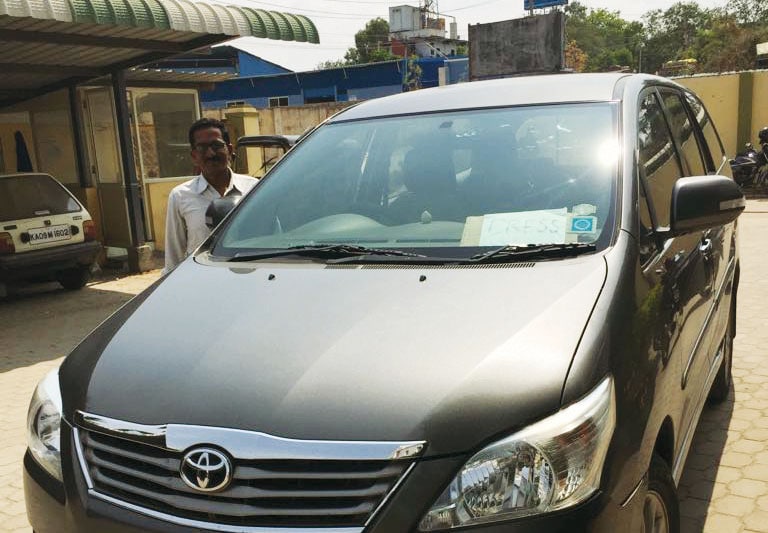 A hurriedly pasted ‘PRESS’ sticker on the windscreen of my car.

The arrival of the would-be candidate was heralded with the bursting of firecrackers. Apparently, as pre-arranged, about hundred villagers, mostly youngsters gathered around the hero, garlanded him, received him with village honour and he spoke without microphone but in a voice that could be heard by those gathered around him in front of a house. Earlier, they had arranged this meeting at a village temple but it was avoided to stay away from possible controversy. Who knows? In each village, bananas were distributed to those present.

Chasing the candidate, I went with them to another three such villages — Basavanapura, Saraguru and Nagarle. It was 1.45 pm and I was tired. It was a long distance to city, took nearly one hour.

As expected, B.S. Yeddyurappa’s Man Friday of many years and a staunch loyalist, Ka. Pu. Siddalingaswamy, who lost to Siddharamaiah in 2013 (enabling Siddharamaiah to become the Chief Minister) was in the team. I joked with him in Kannada, “How are you, king-maker of Karnataka in 2013”. There were rumours then that Ka. Pu. had compromised at the last moment abandoning the battlefield etc., etc. I did not mention it, but he volunteered to talk about it. Though it was a disadvantage contesting from Yeddyurappa’s newly- formed Karnataka Janata Party (KJP), he had got 54,744 votes against Congress candidate Siddharamaiah who got 84,385 votes. He lost by a margin of 24,000 votes (actually it was 29,641). 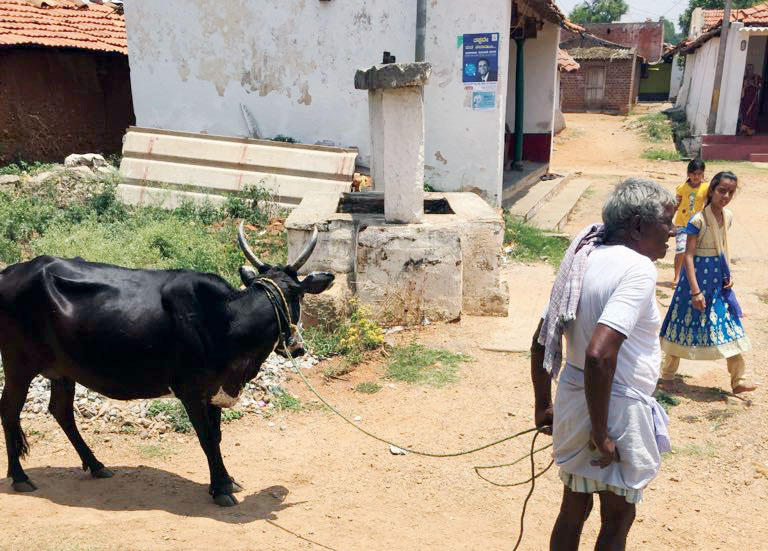 Curiously, Ka. Pu. had a ready reason for his defeat. The Election Commission had given to other ‘also contested’ candidates symbols like apple, pineapple, tender coconut and the like as against KJP’s coconut. According to Ka. Pu., all these symbols looked alike and the village voters could not clearly identify the coconut symbol of KJP from other similar looking symbols and voted to other symbols. As a result he lost over 24,000 votes. A plausible explanation in the given reality but his absence from the battlefield, though for a  few days towards the poll day still needs to be explained. Of course, he had denied the allegation. Let it be.

In a day or two, I will follow Dr. Yathindra’s election campaign in the same Constituency. A few photographs I had taken yesterday are produced above.