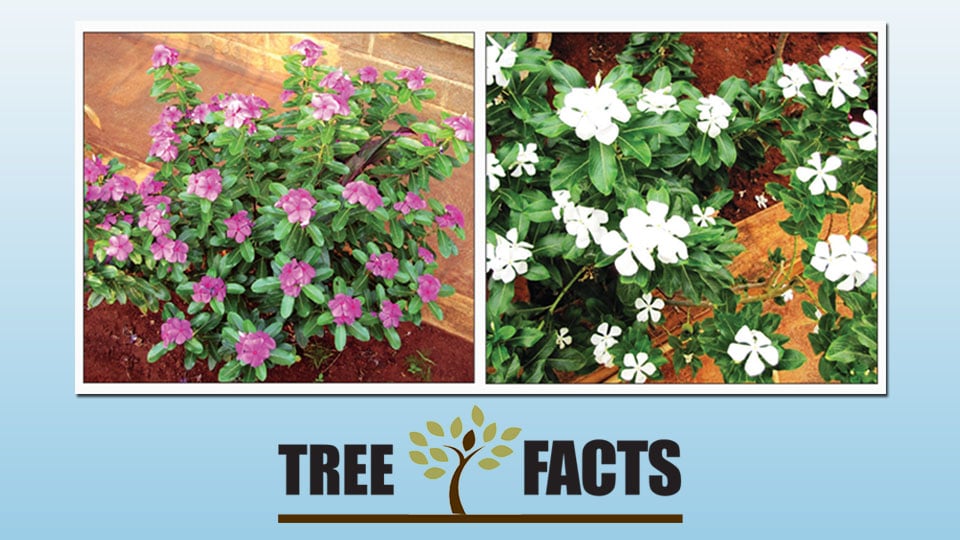 With shiny leaves and pretty flowers ‘Periwinkle’ is a unique plant, which blends ornamental values and medicinal properties. It has earned the name  ‘Sadabahar’ in Hindi as the flowers are literally ever blooming. French referred to it as “Violet of the Sorcerers” as it could ward off evil spirits. In  Kannada  it is  “Nithya pushpa”, “Kashi kanigile.”  Other names are “Cape periwinkle” “Church flower”; “Madagascar periwinkle”; “Catharanthus” ;  Konkani : “Sadapushp”; Malayalam: “Shavam Naari”, “Banappuvu” ; Tamil : “Nitya Kalyani”; Telugu: Billaganneru). The botanical name is Catharanthus roseus (Syn. Vinca rosea) of Apocyanoceae. A native of Madagarcas, it is common throughout India.

It is an evergreen herb or an herbaceous under shrub, quite hardy, biennial or short lived perennial, up to 3 ft height.  The stems are green, silky, and glossy with latex. Leaves are simple, oval, oblong or obovate and opposite in position. The flowers in cymose axillary clusters, are round and flat with an eye in the center. The star like corolla has 5 petals with varying colours (mainly rose & white).  The canoe shaped fruits produced in pairs are called follicles.

There are many varieties / cultivars with carpet like or upright habits like rosea, rosea alba.  Another species C. minor with several varieties is a trailing plant producing blue coloured flowers & one  variety  with variegated leaves. A variety of C. major with large coloured flowers grows best on hills.  C. pusillus (tiny periwinkle) with quadrangular branches and small flowers is native to India.

The plants find place in traditional old folk medicine. In Europe it was used as a remedy for diabetes for centuries; in Hawaii to make poultice to stop bleeding; in China as an astringent, diuretic and cough remedy and in Central and South America as a home remedy for cold to ease lung congestion and sore throats. In Caribbean the flower extract was used to treat eye irritations and infections. In India juice is used to treat wasp-stings.

Multifarious medical application of this plant makes it a unique herb and in recent years it has elicited pharmacological interest as the plant has a mother load of alkaloids: a few like catharanthine, leurosine, lochnerine, tetrahydroalstonine, vindoline and vindolinine are supposed to lower blood sugar and a few others lower blood pressure. The alkaloids vincristine and vinblastine posses anticancer properties.  The roots are a source of valuable alkaloids (ajmalicine and serpentine)  resembling those from Rauvolfia species besides reserpine. The flowers are reported to contain chromium, essential for sugar metabolism and useful in chromium supplementation in diabetics.  Because of the demand, the Periwinkle is being increasingly brought under cultivation in India and has export potential.

This beautiful and elegant plant requires less care, less water and flowers even in the hottest weather.

It can be grown in any type of garden soil and useful for edging, ground cover, mass planting, rockery, border; for clothing steep banks and rocks.

Keep the plant on the dry side, as roots will rot if irrigated frequently. Water lightly that too if required.

For best results, fertilise during the growing season or fork in organic manure or vermicompost during planting itself.

The plant has many side-effects and consult a physician before administrating.

The plants can be grown in any type of soil under full sun  or semi shade  areas requiring a long growing period. They can be propagated by seeds or cuttings. Seeds germinate in a week. Transplant 10-15 days seedlings. Though ordinary garden soil would suffice, use soil mixture-containing 1:1:1 (sand: redsoil: cowdung manure) for best results. For flowerbeds give a spacing of 12 to 18” depending on size and variety. Soft woodcuttings can also be planted directly into beds or pots. The plants are invasive and seed themselves into the landscape &  many seedlings crop up around the plant after each season.  One can simply transplant these seedlings to pots / flowerbeds.

Though pests are of no major concern root rot and Fusarium wilt can cause death due to  water stagnation. The best remedy is to drain out water.