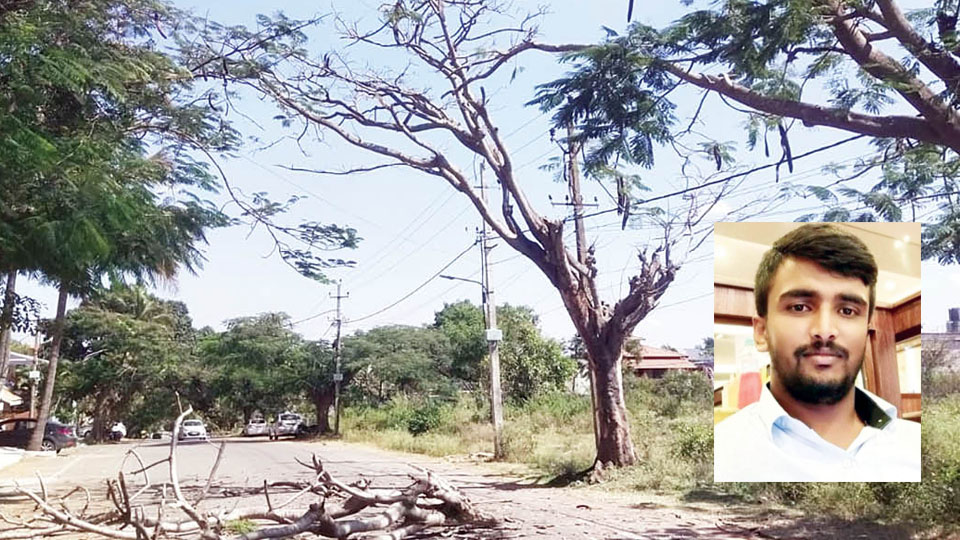 Mysore/Mysuru: A two-wheeler rider sustained serious injuries and is in a critical state after a huge branch of a tree fell on him at Gokulam on Jan. 13.

The seriously injured two-wheeler rider is 24-year-old Sudeep, a resident of Ankanahalli in Shravanabelagola. He is undergoing treatment at a private hospital in city.

He further said that on Jan. 13, Sudeep had gone to a customer’s house in Gokulam for servicing the washing machine and was returning, when a huge branch of a tree fell on his head, causing serious brain injuries and is still in an unconscious state at the private hospital.

Pointing out that they come from a family of agriculturists, he said that the hospital has said that about Rs. 12 lakh would be needed for the treatment.

Lathish said that there are many huge trees that have dried across Mysuru and neither the Forest Department nor the MCC have bothered to clear them and held the Forest and MCC officials responsible for the state his brother is now. “If the MCC or Forest Department officials had taken initiative and chopped down the dry tree, such incident would not have occurred and my brother would not have suffered,” he said.

He said that a complaint has been lodged at V.V. Puram Police Station and urged the Forest Department and the MCC to take care of his brother’s medical expenses. A letter in this regard has also been given to MP Pratap Simha, he added.