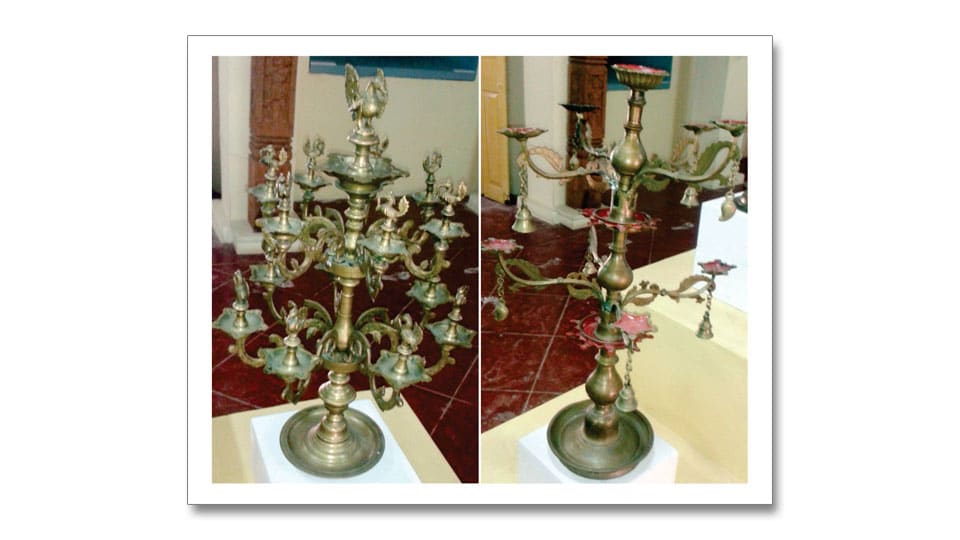 IGRMS to showcase rare lamps at “Deepam” expo from Dec. 11

The  5-day workshop will be inaugurated by Prof. Sarit Kumar Chaudhuri, Director, IGRMS Bhopal, on Dec.10 at 11 am.

The workshop is aimed at bringing all the tribal healers on a single platform to display rare tribal medicines and demonstrate the tribal healing practices from Karnataka, Andhra Pradesh, Kerala, Tamil Nadu, Chhattisgarh, Madhya Pradesh and Uttarakhand.

There will also be a traditional Kerala massage and steam bath at IGRMS premises.

The IGRMS is also organising “Deepam,” a special exhibition on lamps from Dec.11 at Southern Regional Centre. The exhibition will be inaugurated by Prof. Pramod Kumar Misra, President Anthropological Association Mysuru, at 11 am in the premises of IGRMS on Irwin Road, according to J. Vijay  Mohan,  Officer-in-Charge, IGRMS, Mysuru.

Lamp (Deep) is a part of various tradition and cultures around the world in general and India in particular. In almost every Indian home across the rural-urban divide, a lamp is lit daily in relation to sacred or secular domains of culture. Lighting a lamp has certain implication; it exudes positivity and supposed to bring in prosperity, peace and happiness to the inmates. It has a spiritual significance. Lamp is a representative of the fire or light and light symbolises knowledge that removes darkness.

Though lamps are seemingly ageless there is no evidence of their use in the Stone Ages, their first appearance being at the chalcolithic site. However, varieties appeared in the historical levels (6th C. B.C. to 1st C. A.D) and proliferated later on. Even the great epics, ancient scriptures and secular writing make extensive reference to lamps. Later on mythology and folklore has made a powerful and continuous impact on the evolution of lamp by feeding the imagination of artists and craftsmen.

Lamps are available in terracotta, stone and metal (copper and iron) — earthen or terracotta lamps being the earliest one.

All individual feels a divine presence after lighting a lamp. Traditionally, a lamp is lit to celebrate the birth of a life as well as guide the departing soul into the world beyond. The lighted lamp is used for concentration of the mind during meditation, and lit in doorways for the benefit of the weary traveller. It is used as a sacred and auspicious motif for wedding and greetings.

Welcoming the return of a victorious warrior or festivity to mark the annihilation of a demon, every important occasion is thus set aglow with burning lamps.

Lamp has a two-fold function. It is the bearer of light for common use, specifically for household purpose and it also has votive use at the time of domestic rites and festivals. Within the votive types structural changes with usages can be marked like Arathi lamps, Deepalakshmi, Standing and Chain lamps.

A lamp comes into its own during the festival of lights. Deepavali or Diwali which is celebrated throughout the country signifying the end of a dark period and the dawn of prosperity. In some parts of India spring season is given a bright welcome with lamp dance. Other than this worship of cattle and welcoming of new harvest is celebrated as sohrai among the tribes of Jharkhand, marriage and other auspicious event starts from Dev Uthani Gyaras, Chhat Puja in Bihar and Jharkhand and Eastern Uttar Pradesh and on the same day of Diwali, Jain people celebrate a festival of lights to mark the attainment of moksha by Mahavira in which lamps play an important role. The modern scientific era has offered us so much glitter by way of electrical bulbs. But our ancestors have given priority to the worship of lamp after profound experience and through the attitude of gratitude.

The exhibition “Deepam” is a small tribute to the people of India to celebrate the inner essence of the festival of lights. This exhibition takes a closer look at the varieties of lamps used and the tradition associated with it from different parts of the country across the cultural boundaries.