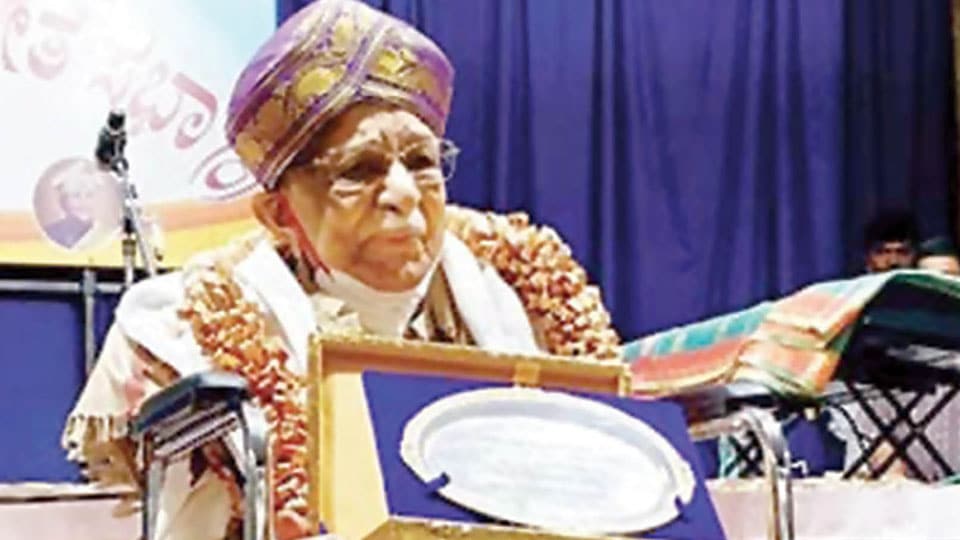 A renowned Civil Engineer, Industrialist, Promoter of Performing Arts, Social Worker and a Munificent Donor — all these and much more was Krishna Murthy Venkatesha Murthy  —  K.V. Murthy  for  short.

Born on May 3, 1931, to Bhageeratamma and Krishna Murthy at Mysuru, Murthy, by sheer dint of diligence and hard work, rose to dizzy heights in his career as a Civil Engineer.

K.V. Murthy, B.Sc., BE., MIE, MIGS, had a distinguished Engineering Career for over 3½ decades and  specialised in multifarious, Civil Engineering Constructions.  He was associated with the construction work of Airports, Dams, Bridges and specially in Marine Structures like Docks, Wharfs, Jettys, Beacons and ‘Shell Roof’ for testing labs while constructing the Indian Institute of Technology, Pawai, Widening the shoulders of the airstrip at Santa Cruz Airport for landing of Boeing 707 in 1958 in the first time etc., all over India — notable being the first full-fledged container terminal at Madras for Madras Port Trust dedicated to Nation by the then Prime Minister of India Indira Gandhi in 1983.

Being an Engineer and top executive of India’s one  of the renowned firms, he had a very lucrative career leading a comfortable life.  But he did not forgot to serve the society, be it social, religious promotion of arts and culture and or paying attention to the needs of the needy.

Recognising his contribution and the prestigious works executed by him, Builders Association of India (BAI), Mysuru Chapter, honoured him with “Engineer Par Excellence” award.

A committed Rotarian, he had diverted his attention towards service to society. One of the landmarks was creation of facilities for the Rotary West Institute for Mother and Deaf Child by mobilising funds to an extent of more than Rs. 30 lakh with personal supervision. For his selfless service, Rotary awarded him, “Four Avenues of Service”, Best Credibility President etc.

Belonging to Mysuru City’s elite corps, he helped in certain reconstruction work of Sri Kanteerava Narasimharaja Sports Club (Mysore Sports Club) without accepting any honorarium, thus saving more than Rs. 10 lakh to the Club. Meritorious Award was conferred on him.

Being a lover of art and culture, particularly music, K.V. Murthy was associated with almost all the cultural organisations in the city in music, dance, drama and other performing arts which he generously patronised. He developed close contacts with almost all the senior musicians, when he was in Chennai for seven years.

Recognising his love for music, Sri Shivarathri Deshikendra Swamiji of Suttur Mutt had involved Murthy in JSS Sangeetha Sabha and conferred ‘Sangeetha Sevanidhi’ on him. His motivating force helped the organisers of Sri Nadabrahma Sangeetha Sabha, to have their own Sabha building. This Sabha celebrated its Golden Jubilee in 2006 and Diamond Jubilee in 2016 and is proud to have a good auditorium with all the facilities with 620 seats capacity under his Presidentship.  He was awarded “Golden Man” of the “Golden Year.” Recognising his services for culture, 22 Sabhas of Mysuru felicitated him with “Kalaseva Ratna” title.

To provide  the connoisseurs, music of class in Mysuru, Murthy and friends have established a Sangeetha Sabha called “Raaga Vaibhava.” During his recent visit to the USA, a renowned music organisation of California conferred him the title “Kalaseva Dhundhara.”

He had also served as the President of Vasundhara Performing Arts Centre (VPAC).

K.V. Murthy was a religious person and his service to the development of Sri Chandramouleshwara Swamy Temple, Vontikoppal, Mysuru, is a standing testimony for his unstinted efforts, both physical and financial with other temple Trustees.

Normally people forget the needs of the departed. But Murthy paid attention to this aspect of life after death and  motivated the people of the society in association with R. Guru, R. Vasudev Murthy, P. Vishwanath (the first Mayor of Mysuru) and his elder brother K. Seetharam Rao, for the construction of “Chirashantidhama”, a modern, clean, well-laid-out crematorium in Gokulam, Mysuru. The infrastructure and other facilities created here for performing the last rites are exemplary.