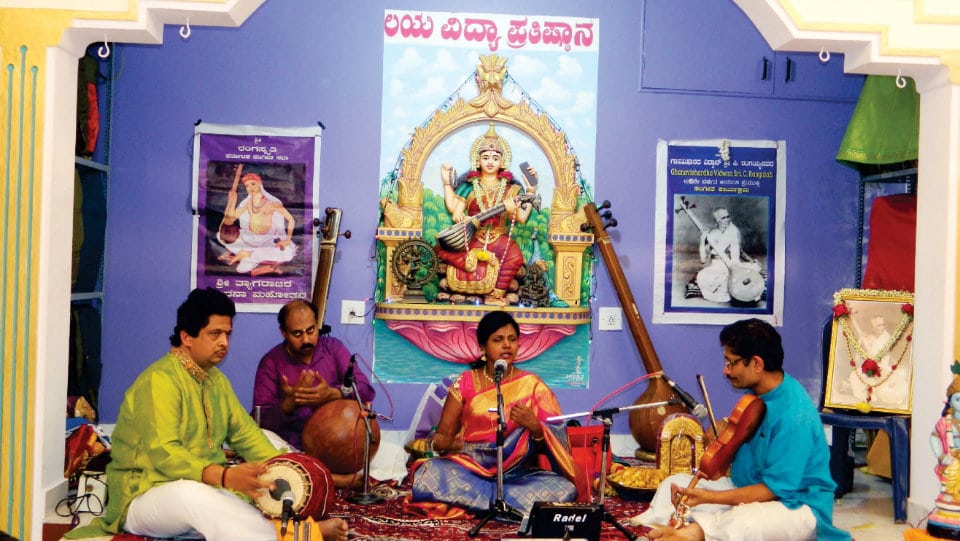 Tribute to a musician

Mysuru has given birth not only to best musicians but also to many best composers. Mysore Sadashiva Rao, Veena Seshanna, Subbanna, K. Vasudevachar, Veena Venkatagiriyappa, Veena Shivaramayya, Belakavadi Srinivasa Iyengar, C. Rangiah and the list goes on. Thanks to Wadiyars of Mysuru who have contributed immensely towards promoting art and artistes.

Interestingly, though Rangiah was an art teacher he revered music as his pathway to salvation. Acquiring accolades was the least he could think of. He was a multi-talented person who was a teacher, writer, director, poet, composer, and a musicologist. He has some twenty new ragas to his credit. He has composed in all the 72 Melakartha Ragas and all the 35 Taalas. He has also penned a few musical plays. His compositions are accomplished with Swarajathi, Keerthana, Varna, Devaranama, Tillana and many more forms.

An ardent teacher, Vid. C. Rangaiah is fondly remembered by his disciples. They celebrated his 125th birth year on the 27th of January 2019 under the aegis of Ranga Smruthi Sangeetha Sabha and Lalitha Kala Kendra.

The programme was inaugurated by H. Srinivas, Assistant Director of AIR Mysuru. Vidu. Sukanya Prabhakar spoke on the contribution of Vid. Rangiah.

Vidu. Suchitra Holla of Mangaluru gave a fine vocal concert with only the compositions of C. Rangiah. She was accompanied by Vidwans C.N. Tyagaraju (violin), H.L. Shivashankaraswamy (mridanga) and Raghunandan Vyasarao ().

Blessed with an attractive voice and a good style of singing, Suchitra easily captures the listener’s attention. The Varna in the raga Ranjani ‘Ranjani raga ’ was crisp and a good choice. In her selection of ragas for the day perfect and not so common. They gave a lot of to prove her creative talent. The brief sketch of Nasikabhooshini was impressive. ‘Gajavadana mam pahi’ had a frill of interesting . Yet another composition saluting Vinayaka ‘Shankari ’ in Shuddha was .

C. Rangiah’s keerthanas follow the footsteps of Tyagaraja and Dikshitar. The lyrics that are mostly in Sanskrit and the different shades of its moods with a perfectly matching Dhaatu reminds one of the trinities.

‘Sathyanarayanam nithyam chinthaye’ in Panthuvarali is an example to it. The melodious delineation of the raga by both Suchitra and C.N. Tyagaraju created the required mood for the kruthi to follow. The opening line was taken for neraval that was presented in detail. Kokilapriya was the raga chosen for a pallavi. The appropriate phrases unveiled the beauty of the raga. After a short and crisp taana, she began the Pallavi, set to Khanda Triputa taala. ‘Haripalaye Kamalalaye Kokilapriye tvam kalaye,’ an opening line of one of his Keerthanas was adopted to be a pallavi. But Suchitra’s prowess was proved in setting the pallavi into two different gatis. The poorvardha or the first half was in Tishra gati and the Uttarardha or the second half was set to Khanda gati, thus making it more complicated! Both Suchitra and Tyagaraju handled it with ease. The challenging taala was superbly managed by Shivashankaraswamy along with his disciple Raghunandan Rao in the Tani avartana.

A fine composition ‘Ume pahimam’ in the raga Revathy was presented with total bhava. A sloka from one of the musical Ramayana written by C. Rangiah brought the curtains down.