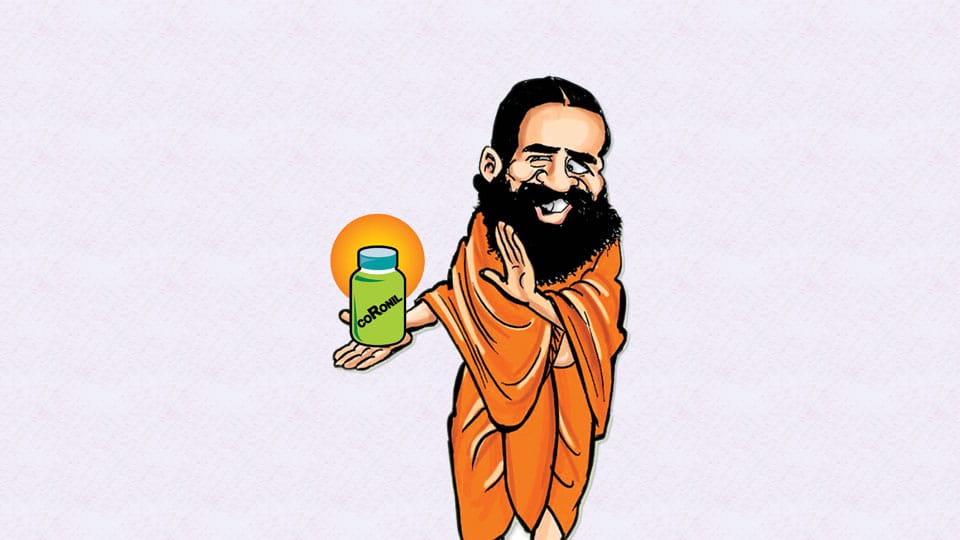 On Sunday, India’s most famous, most flexible and most business-savvy Baba, Baba Ramdev was forced to withdraw a statement where he had said “lakhs have died from taking allopathic medicines for COVID-19.”

But, just a day after retracting his statement he mocked allopathy by posing 25 questions to the Indian Medical Association (IMA).

Well, Ramdev has the right to ask questions but he forgot to ask himself, while he expects a 200-year-old system to cure ailments, why hasn’t a 5,000-year-old system, ayurveda, which he profits from, not found a cure for all these ailments either?

Ramdev then added, “Doctors should not fall ill at all if allopathy is all-powerful.” Well, Ramdev should have asked himself, don’t Babas fall ill In spite of their strict diet, disciplined lifestyle  and  yoga asanas?

Didn’t his close aide and business partner, Acharya Balkrishna get admitted at All India Institute of Medical Sciences in Rishikesh after he complained of chest pain and giddiness?

Unquestionably ayurveda works, but let’s not belittle modern medicine. Allopathy has not only saved millions of lives but improved it. The very fact that an Indian’s average life expectancy rose from 41 years of age in 1950s to 69 years of age today, in spite of our terrible lifestyle, is proof of allopathy’s success.

But, Baba Ramdev should understand this is not about which system of medicine is better, it’s about spreading misinformation at a time when people need to be reassured of government healthcare systems and protocols so people come forward for early detection and vaccination.

Makes one wonder if Ramdev is pushing for business? Does he feel ayurveda is missing out to allopathy? Is he disappointed that as crores worth of allopathic medicines are being ordered by the government, his company’s covid medicine ‘Coronil’ languishes with no takers?

It is truly unfortunate that the Union Health Minister Dr. Harsh Vardhan simply reprimanded Ramdev by asking him to withdraw the “extremely unfortunate” statement. Would the government have been so forgiving had the representatives of Himalaya or Dabur, which also make ayurvedic products, made such a statement? No way.

May be the time has come to treat Baba Ramdev for what he really is — a popular yoga teacher who owns a successful healthcare products company. And while an MBA wears a suit and Baba wears a robe, they both are aware of their balance sheets.

Baba Ramdev co-owns one of our country’s biggest Fast-Moving Consumer Goods (FMCG) companies, Patanjali Ayurved, which had a turnover of over Rs. 9,000 crores with Rs. 424 crore profit in 2020, the pandemic year! His company sells everything from toothpaste to torn jeans. From creams that make you fair to jewellery that make you lovely.  He also owns 5 TV channels under Vedic Broadcasting Ltd.

There is no doubt that Baba Ramdev forged his own path to be a political influencer, but may be that influence is being over-estimated like the influencers on instagram and facebook.

We remember when Ramdev flew into Delhi to join the Ramlila protest, four UPA Ministers, including our former President Pranab Mukherjee met Ramdev requesting him to go back. Of course, they over-estimated his resilience, conviction and courage because he later escaped dressed like a woman and then could not even fast for four days.

While Baba Ramdev’s anti-corruption stance may have benefitted his Patanjali products and the BJP, he is not popular enough to be a major vote-getter. So the BJP doesn’t have to perform Anuvittasana, a back-bending asana and tolerate Baba’s statements.

One may ask what is wrong if Baba Ramdev cultivates and uses political influence. After all, business owners do the same. The only difference being that they purchase a Rajya Sabha seat to lobby for their business in Parliament while Ramdev uses yoga, ayurveda and saffron robes to do the same. There is nothing wrong in this, but…

It is wrong when someone claims that his company can cure everything from cancer to Ebola. It becomes a social problem and a hindrance to the healthcare delivery system when a Baba with a following says homosexuality is just an addiction which he can cure and that Corona is just a viral infection which his Coronial tablets can cure. It is a problem because many people are refusing vaccination as they say they have Coronial and in other cases people are delaying their visit to the doctor as they are consuming alternate medicines.

Indeed, allopathy does not have cure for most of the ailments that Baba Ramdev listed out, but it does help manage them very well.  On the other hand, even ayurveda hasn’t done so well with these ailments even with a 5,000 year headstart.

That said Baba Ramdev cannot challenge allopathy on aliments that don’t exist like when he asked if allopathy can cure “bloating amnesia”…. This is not a recorded medical problem, it doesn’t exist!

For now, by making claims of unproven cures and making up ailments, Baba Ramdev is damaging the seriousness of ayurveda as a system of medicine and wellness.

Since BJP promotes ayurveda and wants to protect the sanctity of this ancient Indian systems of medicine, they better ask Baba Ramdev to take a deeeep breath and hold it till Corona goes.