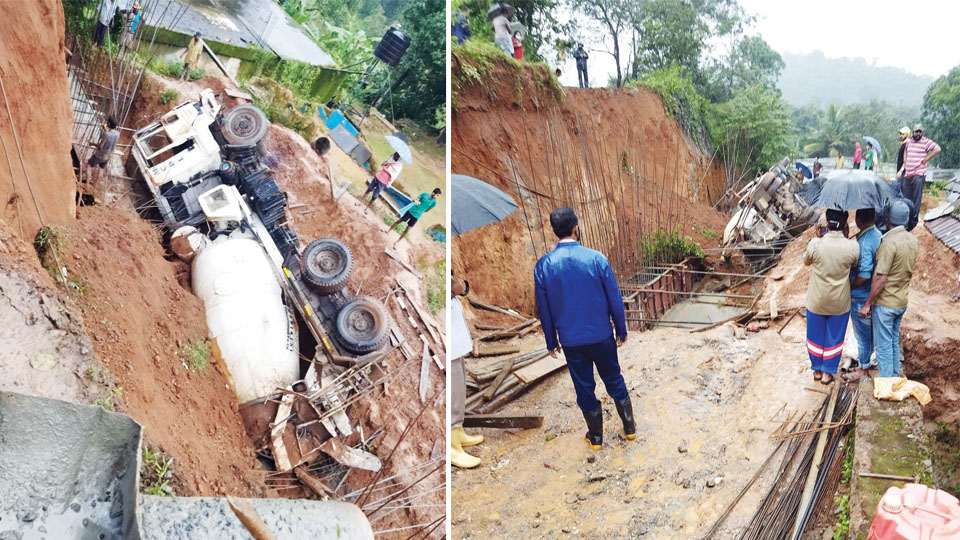 Madikeri: Two labourers were killed on the spot, while five others escaped miraculously, when a concrete mixing vehicle toppled during the construction of a retaining wall near Cherambane in Kodagu yesterday.

The deceased are Santosh Bandari (27) and Praveen (21) from Gadag. The bodies were retrieved late last night and have been shifted to Madikeri District Hospital for post-mortem.

Bhagamandala Police have registered a case of negligence against the PWD Contractor and the vehicle driver. The driver has gone absconding.

Details: Following decrease in rainfall since two days, a PWD Contractor had taken up the construction of a retaining wall near Cherambane. A 10-wheel concrete mixing vehicle, loaded with concrete mixture, was brought to the spot yesterday.

The vehicle was dumping the concrete mixture from above to the trench dug up to build the retaining wall below, during which a small hill collapsed and the vehicle toppled below.

While two labourers were buried under the mud and died, five others managed to escape from the spot.

Later, an earth-moving machine was brought to the spot and the concrete mixing vehicle was removed and the bodies of the two labourers were retrieved and shifted to Madikeri District Hospital late last night.

Bhagamandala and Madikeri Rural Police visited the spot and a case has been registered by Bhagamandala Police.