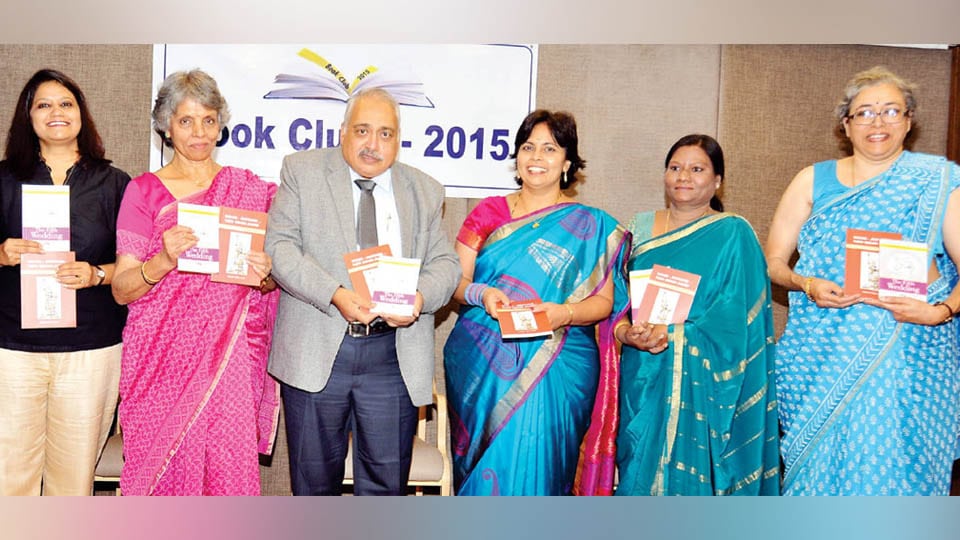 Mysuru: It was an evening of banter, bonhomie and intellectual stimulation. The gathering of bibliophiles and a couple of authors and writers added to the free atmosphere with lot of self-deprecating humour. The occasion was the book-release function organised by Book Clubs-2015, last evening at a private hotel in Vontikoppal here.

Medical Practitioner and Star of Mysore Columnist Dr. K. Javeed Nayeem set the ball rolling after releasing the two books “The Fifth Wedding” and “Indian-American…Then Indian Again,” when he began, “Good writers need not be good speakers. Since I am not that good a writer, I think I speak fairly well.”

Recalling his eleven years association with the author Lakshmi Palecanda, he spoke of the difference between love marriage and arranged marriage with reference to the topic in the book and said, “I cannot relate much to falling in love before marriage because I fell in love with my wife after I got married and it was an arranged marriage.”

Lauding the efforts of the author, Dr. Nayeem said that the turns and twists in her stories peppered with humour and command over the language, all made it a very interesting read.

“Can these things happen in real life?,” asked author Lakshmi Palecanda when her turn to speak came and answered it herself. “I had just written some of my experiences while in Delhi and I wanted to get it published in a women’s magazine. I did not know how to go about it. I was travelling in a train from Delhi to Coimbatore and in a casual conversation with my co-passenger, I shared with him about my writing. He told me that he was an Assistant Editor of Hindustan Times and as soon as he read what I had written, he said that he himself is going to publish it,” said Lakshmi Palecanda, sharing her experience of serendipity.

Later, in a conversation with  another author Sujata Rajpal, she said that in the three forms of writing, she found writing short stories the toughest, while writing articles and novels was more her forte. However, any form of writing is a labour of love, she added. The gentle banter between the two authors had the audience in splits.

The two Literary Festivals organised in June have opened the eyes of Mysureans to book launches and with more and more Mysureans turning authors, the stage is set for the literary scene to pick up and match other cities in the  country.