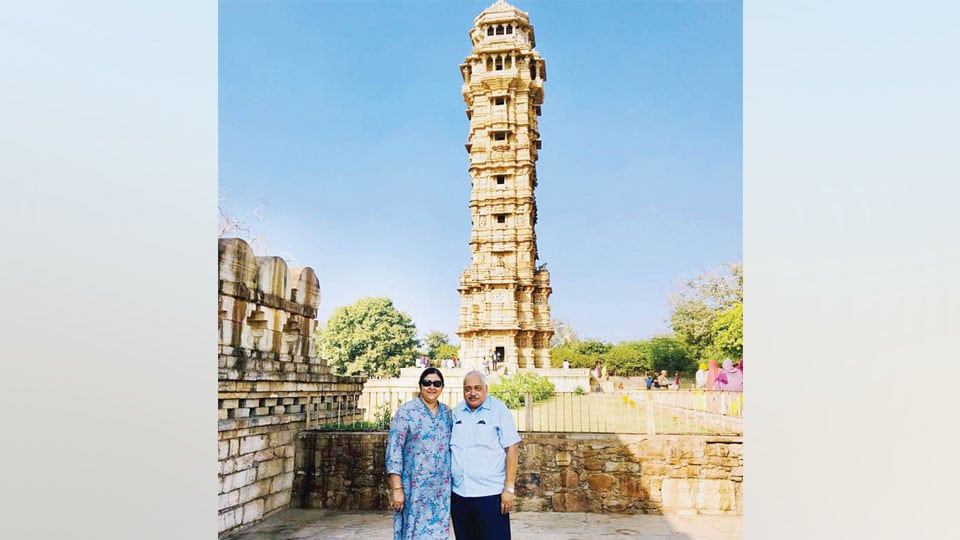 My childhood fascination for Chittor

Last Friday I wrote about my recent visit to the fortress town of Chittorgarh at Rajasthan and my very disappointing experience with the guide there who instead of guiding my family and me around the historically important sites was only hell-bent on narrating the storyline of the recently released film Padmavat which itself happens to be a much twisted version of an already much disputed historic fable. But it was another very interesting legend from history which had instilled in me an interest in visiting Chittor since my early childhood. And, mind you, the legendary beauty of Rani Padmini had nothing to  do with it !

That was the story of Panna the faithful nurse which I had heard in my early childhood from my cousin Sha Farooq Hussain who being much elder to me, had been entrusted by my late father with the job of helping me with my lessons. He used to stay very close to the house of my maternal grandfather where I stayed for many years during my schooldays and I used to spend an hour after school with him. It was an hour that I considered very well spent because my cousin in addition to being a capable teacher was a very good story teller too with his own very unique style of narration which would almost recreate the scenes from his stories right before my eyes !

The second reason why I liked the sessions with him was because unlike most teachers he was a person who could be very easily distracted from what he was saying to what I wanted him to say ! So it was no big deal for me to get him to switch from the rather boring content of my textbooks to something more interesting like the way we can now switch television channels with the press of a button on the remote !

And, this art of switching channels was something that I had mastered very quickly in our student-teacher relationship! He too soon discovered that I was taking him for a ride almost every day with my distracting questions and so he devised a strategy where he would tell me an interesting fact from history or a historical story itself after my lessons to whet my appetite for stories. Sadly, this arrangement had to end in just two years when he got a government job as a statistical assistant.

But while it continued I had a chance to listen to some very interesting stories and legends and the story of Panna was among the stories he read out from a book called ‘Heroic tales of India’ which he had received as a prize in a literary competition. The story tells of the heroic and heart-touching sacrifice Panna Dai a humble nursemaid employed by Maharana Sangram Singh, one of the Mewar rulers to breastfeed and look after his infant son, Udai Singh right from his birth in the year 1522. Panna also had her own son Chandan of similar age who grew up with Udai as his playmate.

When Panna was informed by one of the Palace maids that Udai was about to be killed by his uncle Bhanvir in a desperate attempt to seize the throne she quickly bundled away the real Prince and placed her own sleeping son in the royal crib. Bhanvir barged into the bedroom soon after and killed Panna’s son right before her eyes. Panna showed no emotion as the tragedy took place, only revealing later to a shocked royal family that the royal heir was safe with her! The moment I listened to this most unusual and heart-rending story with tearful eyes I decided that I should visit the historic town of Chittor as soon as possible. The story of Panna’s sacrifice had tugged at my heart strings and stirred my soul so much that whenever I read in my later years about the history of Mewar and saw pictures in history books of Vijaystambh, the most iconic monument of Chittor, my childhood longing to visit Chittor would return to me. Despite having travelled far and wide I could somehow accomplish this and realise this dream only last month. Now that I have done it, Panna will perhaps rest in peace !

Lost and Found and Lost Forever

Two days ago I lost my childhood schoolmate Dore Joseph Sunandaraj in a freak motorcycle accident. We were playmates right from our primary school days and we last played cricket together on the grounds of St. Philomena’s High School in the year 1969. I lost touch with him for the next forty years, not knowing where he was or what he was doing.

Somehow I did not bump into him even at any of our school or college reunions too. But while I was having dinner with my family on my Birthday last October at Charcoals, the poolside restaurant of Hotel Southern Star he suddenly materialised out of the darkness and exclaimed “Hey don’t we know each other?” It was a very pleasant surprise for me and he was overjoyed when I addressed him by his full name. He told me that he had recently joined Southern Star as their new F&B Executive Manager after a long stint in the hospitality industry both in and out of the country.

We had a long chat during which told me that he had decided to settle down for good in Mysuru now. He ate a piece of my birthday cake and we even had a picture taken together. We parted, pledging that we would meet soon and we did too when I went to Southern Star once again about a fortnight ago to attend a medical seminar. Sadly, that was our last meeting. A motorcycle enthusiast, he was very fond of his good old Bullet motorbike on which he had ridden to Leh and Kargil last July. He was planning a ride to Sikkim soon with his wife Sunitha but destiny sadly, had other plans for him and took him for a ride heavenwards instead ! May his soul rest in peace. Amen!

Chittor Dr. K. Javeed Nayeem Over a cup of evening tea Rajasthan
“There is shortage of teachers not only in India but all over the world”
Strange desire to seek power by our politicians may lead to people losing liberty