Home » Columns » Abracadabra By K. B. Ganapathy » Strange desire to seek power by our politicians may lead to people losing liberty 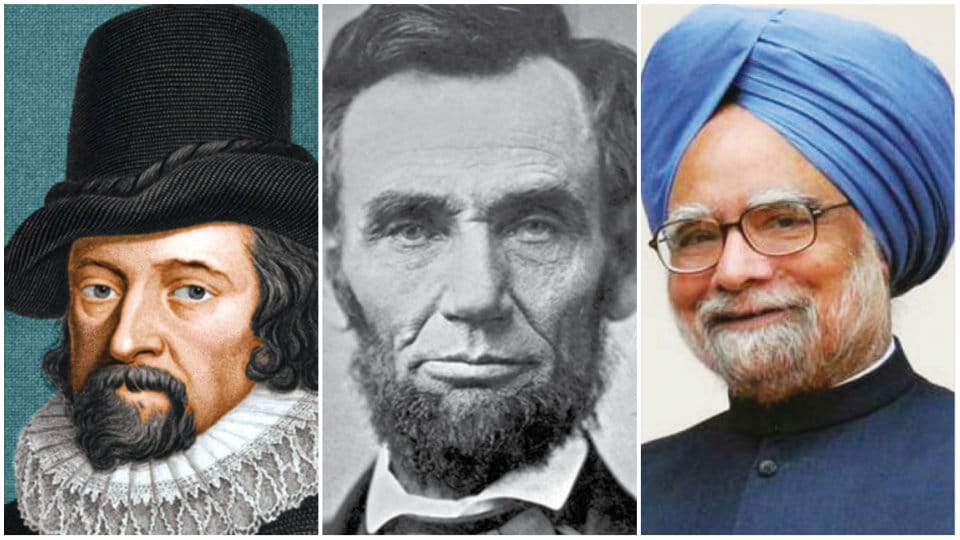 Declaration of 1975 Emergency by Indira Gandhi is an example

It is a strange desire, to seek power, and to lose liberty; or to seek power over others, and to lose power over a man’s self. Francis Bacon said this famously and the truth of what he said is seen in Indian Democracy since 1975 when Emergency was imposed on an unsuspecting people of this country.

However, I was further convinced of the truism in what Francis Bacon said after seeing the Hindi film ‘Accidental Prime Minister’ last evening. Dr. Manmohan Singh, an economist and a financial genius, who had held may top jobs, was made a puppet. By seeking power as Prime Minister, he lost power over his own self.

The happenings in Indian politics since 2004 could be considered as an affirmation of what Francis Bacon had said. I also remember another famous statement made by Abraham Lincoln, the American President, who saved America from being split as North and South on the issue of abolition of slavery. He said, “Nearly all men can stand adversity, but if you want to test a man’s character, give him power.”

We have seen this since the time Indira Gandhi became the Prime Minister. I would also add, “If you want to test a man’s character, give him money also.” If today a rowdy-sheeter could be given a ticket to contest an election and enable him to win the election, we                                                             can well imagine the rot that has set into our electoral politics and we find what havoc can be played on the society by those who hold control of the deadly combination of money and power. The simplest example is the incident that took place at Eagleton Resort between two MLAs of the same political party.

In developed countries, all the elected representatives are known as law-makers. That is, to introduce new laws as per the requirement for efficient administration of a country or a Province or a State. The law-makers also have a responsibility to amend the existing law as per the need of the hour or the changing social order and practice. Unfortunately in the present Indian Democracy, these law-makers — MLAs, MLCs, MPs and Ministers — are more concerned about helping their own cronies in business, industry or government jobs than looking into the best laws to govern the country or the State. In India, the politician has so formulated the laws relating to elections and his rights that, once elected, he is unchallenged for the period of his term.

The system relating to election under our Democracy needs to be changed in the next 10 years rather radically, borrowing ideas from the Western, developed democratic countries where checks and balances are not only provided for but also complied with.

The words of Francis Bacon, “It is a strange desire, to seek power, and to lose liberty” keeps ringing in my ears when I see the happenings in some of the countries in the world. For example, India of today. When everything looked hunky-dory for Indian Democracy when UPA, under Congress was ruling from 2004 to 2014 with Dr. Manmohan Singh as the Prime Minister for two terms (ten years), suddenly, the Congress party and its allies lost power to NDA led by BJP in 2014.

Surprisingly, Congress (UPA) could not bear to suffer the loss of power, so they went on a rampage against the BJP (NDA) without concern for the democratic values. As a result, they began to find fault with the new government so much so it came up with the allegation against the BJP of practicing ‘intolerance’ and then it was followed by ‘award-wapsi’ campaign to register their protest against BJP government. But ironically, all those awards were given to those who supported Congress and Leftist parties, exceptions apart.

Then came the next allegation of hacking Electronic Voting Machine (EVM), which was alleged to be the cause for BJP’s victory in 2014. If the Congress won the election there was nothing wrong with EVM, only when it loses, the complaint is heard all over. It did not occur to Congress when it won the 2004 election and also 2009 where EVMs were used! Did anyone hack the EVMs to help Congress? This trend may lead to a dangerous situation where dubious methods are used to seek power and may end up with the people of the country losing personal liberty.

I am reminded of what happened in Egypt during the Arab Spring following the 2011 Egyptian revolution which ousted President Hosni Mubarak. Mohamed Morsi of Muslim Brotherhood won the Egypt’s Presidential election. Morsi however lasted little over a year following a military coup in July 2013. Why did it happen? It was a strange desire on the part of Muslim Brotherhood led by Mohamed Morsi to seek power during the Arab Spring. But sadly, his very success in getting power led to losing of liberty not only for himself but also for the people of Egypt.e-mail: [email protected]