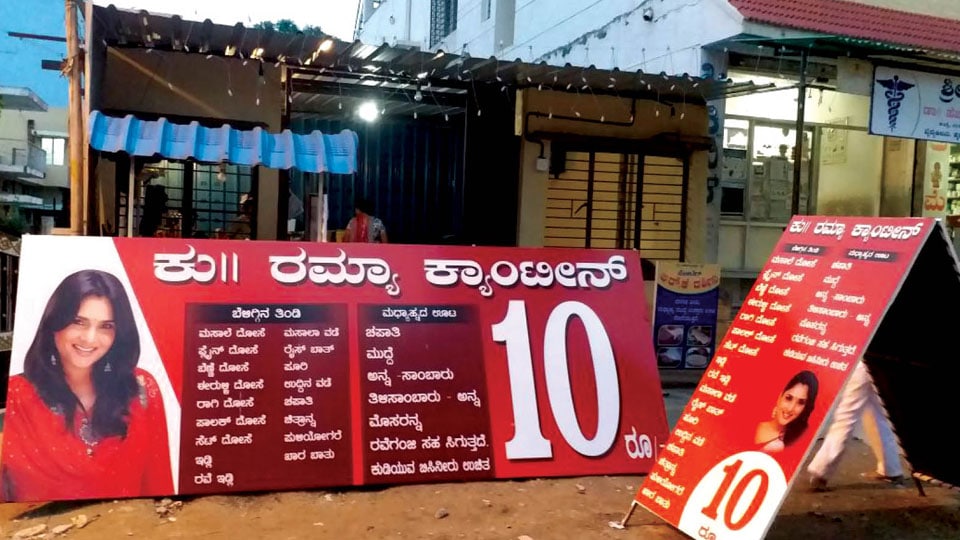 With Ramya Canteen, food politics picks up pace in Mandya

Mandya: With Assembly Polls is just about 4-5 months away, political activities in Mandya has already started to gain momentum with supporters of various political leaders opening canteens and serving food in a subsidised rates.

After the successful launch of ‘Indira Canteen’ in Bengaluru by the Congress State Government, it was the turn of JD(S), which opened ‘Appaji Canteen’ naming it after former Prime Minister H.D. Deve Gowda. Now, with rumours of actress and former MP Ramya wanting to contest in the ensuing Assembly Polls from Mandya, a new canteen – ‘Kumari Ramya Canteen’ has come into being in the Sugar Town.

Raghu, the canteen owner, said it was purely a business tactic to bring customers to his canteen and it had nothing to do with the politics.

Earlier, he owned a road side eatery but with District Administration evicting roadside shops, Raghu started a small canteen but failed to attract customers.

He later decided to reopen the canteen naming it after Ramya and also managed to get District Congress President Athmananda to inaugurate the same. This gained a lot of attention and the business picked up quite well.

Ramya has been trying her best to get connected to the party workers and people in Mandya. In fact, she had also rented a house in the town sometime back but with severe internal dissidence, she had to move out.

People associated with Congress believe it could be new move by the former MP who is trying to make her foothold in Mandya. The ensuing election will be interesting as JD(S) and Congress will fight for dominance over the district.

However, the JD(S) suffered a jolt with two of its MLAs – Cheluvarayaswamy (Nagamangala) and Ramesh Babu Bandisiddegowda (Srirangapatna) turning rebel and supporting the Congress party. In fact, C.S. Puttaraju, who represents the Mandya    Parliamentary constituency, also belongs to JD(S).

Unfortunately, the BJP, which is trying its best to come back to power in the State, has no foothold in Mandya.