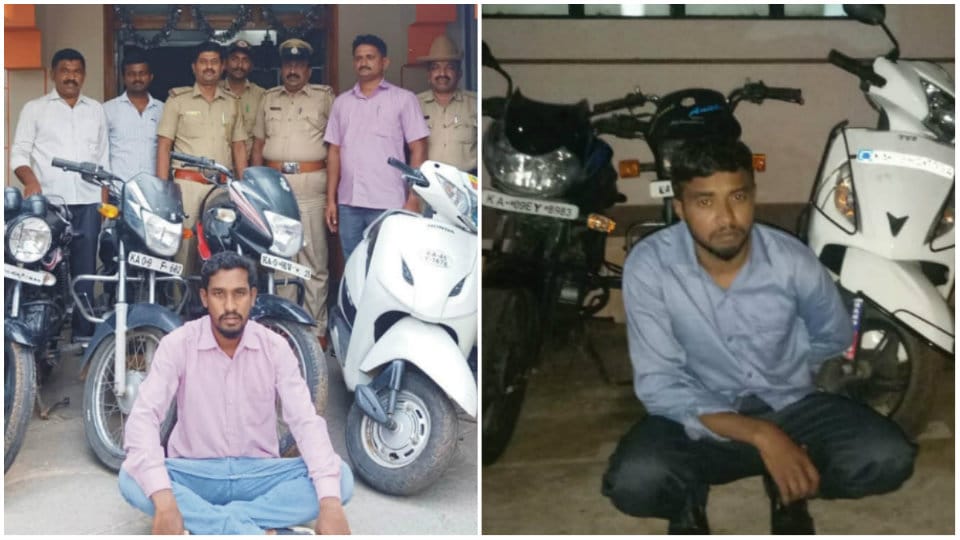 Mysuru: In separate cases, V.V. Puram and Vijayanagar Police have arrested two bike lifters and have recovered seven two-wheelers worth about Rs.2 lakh from them.

In the first case, V.V. Puram Police, on June 2, have arrested a person near Ramanna Circle at Yadavagiri on charges of lifting a bike near Cheluvamba Park in V.V. Mohalla and have recovered four two-wheelers worth about Rs.1 lakh from him.

The arrested bike lifter is 27-year-old Manu Kumar of Halepura village, Harave hobli in Chamarajanagar taluk. Following his arrest, the Police have solved one case each in V.V. Puram and Saraswathipuram Police Station and two cases in Nanjangud Police Station.

In the second case, Vijayanagar Police have arrested a person who was trying to sell stolen two-wheelers and have recovered two bikes and a scooter worth about Rs.1 lakh from him.

The arrested is 28-year-old Naushad, a resident of N.R. Mohalla in city.

Naushad was arrested while he was attempting to sell the bikes he had stolen in Vijayanagar. The Police have recovered one Bajan Discover and one Hero Splendor bikes and a TVS Jupiter scooter from him.