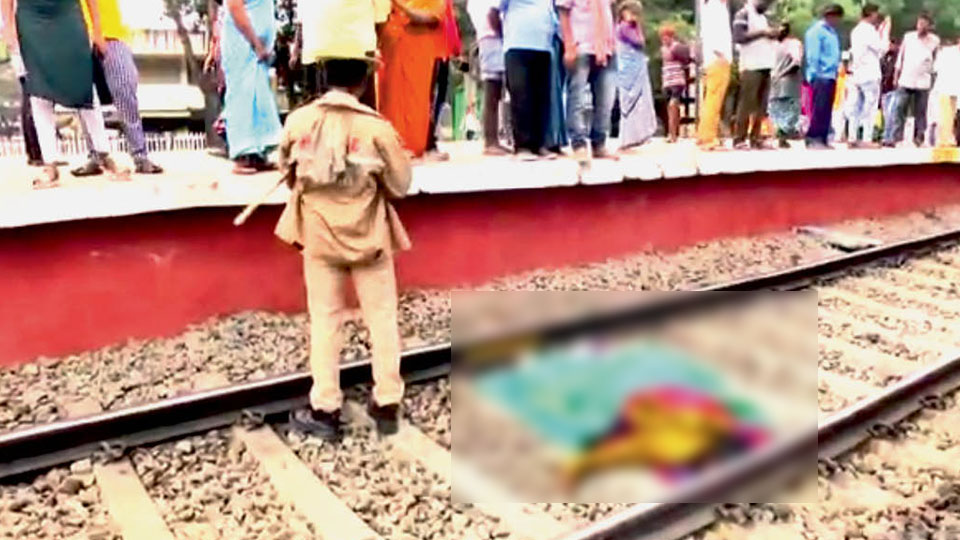 Two women run over by train at Mandya Station

Mandya: Two women, who alighted from a train, were run over by another speeding train at Mandya Town Railway Gate this morning. In a tearing hurry to cross the Railway line, the women did not pay attention to the approaching train from Mysuru though the loco pilot was honking continuously.

Unconfirmed reports said that while one woman, who was caught right in the middle of the tracks, was speaking on her mobile phone, the other lady, who was standing next to the tracks, tried to jump off but was caught under the wheels of the train. The incident occurred between 9.30 am and 10 am. Reports said that the women, one aged around 60 and the other around 35, were travelling from Bengaluru to Mandya in the Kacheguda Express.

Many people had alighted the train and these women failed to notice the approaching Malgudi Express that was heading from Mysuru to Bengaluru. The women were run over right in front of other commuters.

Eyewitness Renuka told reporters that it was  business-as-usual where many passengers got down from the Kacheguda Express. “Even I came in that train and was sitting on the platform. I heard loud screams where the Railway parcel movers were seen alerting a young woman who was standing next to the tracks. The parcel movers were asking the young lady to move aside as the Malgudi Express was fast approaching,” she recalled.

“I raised my neck and saw an elderly woman right in the middle of the tracks and she was run over by the train within seconds. The younger woman, who was alerted by the parcel movers, tried to jump off but was eventually caught under the wheels,” she said.

“Unfortunately, the two women did not even hear the loud honking sound of the speeding Malgudi Express and they might have presumed that the shrill horn was that of Kacheguda Express that was getting ready to leave for Mysuru,” Renuka said.

The identities of the women are yet to be established and local villagers said that the elderly woman is the mother of the younger woman and they hailed from Shivalli village near Mandya. However, the Police and the Railway Protection Force are yet to confirm the identities.

The Police have taken possession of their bags and belongings and have shifted the bodies to Mandya Institute of Medical Sciences (MIMS) mortuary.