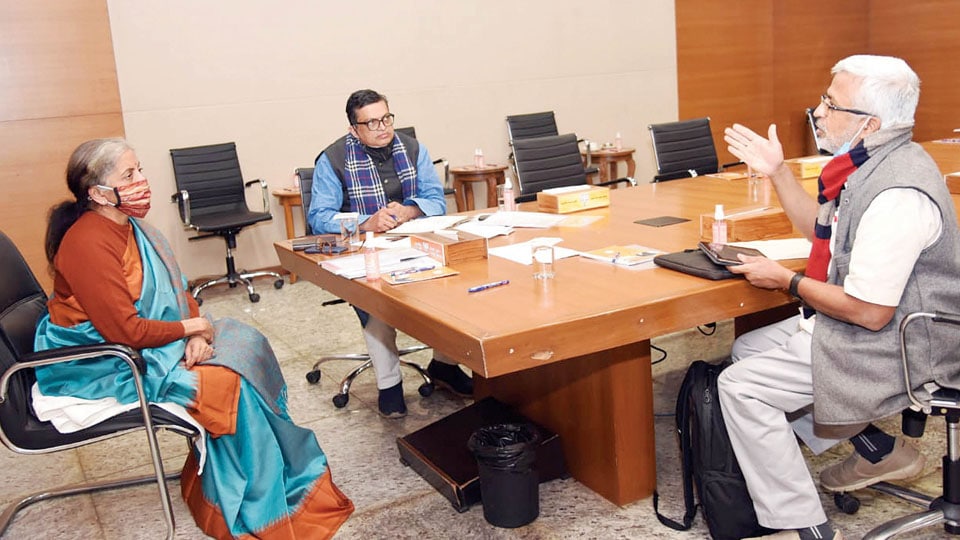 The Union budget of India arouses not only interest but passionate debate across the country.  From Corporate czars to the experts on television shows, to the man on the street, everyone likes to comment on the Union budget. Each one tends to see it from their own perspective and form opinions that are driven by both objective and subjective analysis. After a week of talk, most of the excitement dies down and very few even remember either the Union budget or the long-term consequences of the same.

Experts commenting on the budget each year use words like ‘pro-corporate’, ‘urban centric’, ‘pro-farmer’ or ‘rural focussed’ based on the allocations made or their own preferences.  Some of the other common expressions that have been used to describe the Union Budget are words like ‘middle-class friendly’, ‘social sector inclined’,  ‘taxation heavy’, and ‘election year budget’.

In a year that is still seeing COVID ravaging the world, one can expect now to see a ‘COVID response’ in the budget. Whether it is increased spending on health care and vaccines, or stimulating the failing economy — the budget is expected to reflect the concerns of the Government in managing both COVID pandemic and its social and economic fallouts. Another possibility is the political need to reflect the concerns of the protesting farmers while keeping in mind the need for additional defence spending considering the growing Chinese threat.

Whatever the Finance Minister finally decides to do, one must understand that the budget document reflects the core fiscal policy of the Government and should not change based on political or situational compulsions alone. While the budget is indeed prepared on a year to year basis, a reasonable policy continuance is to be expected from the Government in power. From this perspective, one also hopes that the Prime Minister’s oft repeated vision of making India self-reliant (Atmanirbhar), enabling a 5 trillion dollar economy and making India a scientific superpower are also kept in mind. Programmes like Ayushman Bharat, UDAN, Rashtriya Madhyamik Shiksha Abhiyan (RMSA), Atal Innovation Mission and Make in India are just beginning to show encouraging response and need continued support.

As citizens, we need to appreciate the pivotal role budgets play in governance. Government budgets are policies that affect every sector of the economy and every section of the population. The policy concerns steering the budget and its implementation find resonance in the day-to-day lives of people and they need to understand and appreciate the process of budget formation.

This process described under four phases begins with the stage of formulation and starts around the month of August-September each year. The Budget Division of the Department of Economic Affairs of the Ministry of Finance sends a circular to various Ministries and Departments, requesting them to prepare estimates of expenditure to be incurred by them in the following year. The Ministry, after having received and scrutinised the estimates, undertakes the process of compilation and co-ordination of estimates of expenditure of different Ministries and Departments.

READ ALSO  The transformation of Chikkaputti

The Department of Revenue, Ministry of Finance prepares the estimates of revenue. The Finance Minister also holds several consultations with major stakeholders, experts and industry leaders to get a first-hand understanding of people’s expectations. She then examines the budget proposals prepared by the Ministry and may make changes in them in consultation with the Prime Minister. The President is also shown the budget.

Similarly, the Finance Minister briefs the Cabinet about the budget shortly before it is presented to Parliament. During the budget preparation and later, only those in the Government, the Chief Economic Advisor in the Finance Department, Reserve Bank of India as the Central Bank (or Banker’s Bank), the various Parliamentary Standing Committees which finalise the expenditures of the various Ministries and the demands of the Departments, research institutions like the National Institute for Public Finance and Policy, New Delhi and finally the Finance Ministry itself which finalise the document are in the know.

This is then followed by the process of enactment. The budget is presented to the House by the Finance Minister on the 1st of February and is discussed in two stages — the general discussion followed by a detailed discussion, and voting on the demands for grants. During the general discussion, the House is at liberty to discuss the budget as a whole or any question of principle involved therein but no motion can be moved. Immediately after the presentation of the budget, the Finance Minister also presents the Finance Bill for tax proposals as required under Article 265 of Indian Constitution. It is expressly laid down in the Constitution that no tax shall be levied or collected except by the authority of law and Parliament’s approval is needed in this regard.

As regard the demand for grants, under Article 113 of the Constitution, the financial initiative is the executive’s privilege. Only the Government can present a demand for grant and not the private members. This is meant for balancing of revenue and expenditure which is the job of the executive. After the demands for grants are voted by the Lok Sabha, the Appropriation Bill is introduced, considered, and passed by the Parliament. It incorporates all moneys required to meet (i) Charged expenditure, and (ii) grants made by the Lok Sabha. This bill is again passed as a Money Bill. This then provides the legal authority for the withdrawal of sums from the Consolidated Fund of India by the Government.

Once the Finance and Appropriation Bills are passed, the Government can collect revenue and spend money on approved schemes and the phase of implementation commences. Collection of revenue is the responsibility of Revenue Department of Finance Ministry. For direct tax collection we have Central Board of Direct Taxes and for indirect tax collection we have Central Board of Indirect Taxes. The individual Departments and Ministries are informed by the Ministry of Finance about their respective budget allocations and they can now start using them to fund their activities. All appropriated amounts lapse at the end of the financial year (except in some cases, for capital expenditure to be incurred on building assets which could take more than a year) have to be spent during the budget year (April-March) itself.

Next comes the phase of audit. It begins after the Controller General of Accounts (CGA, under the Ministry of Finance)  prepares a condensed form of the Appropriation and the Finance Accounts of the Union Government. The accounts prepared by CGA are audited by the Comptroller and Auditor General (C&AG) of India. These audited accounts are placed before both the Houses of Parliament. Other than C&AG, Parliamentary control over the Budget is exercised by the Public Accounts Committee, the Estimates Committee and the Committee on Public Undertakings.

Beyond all this, what matters most in a democracy is citizens holding the Government accountable for what they do and how they do it.  Accountability means, in part, that the policies and plans that a Government develops should reflect the priorities, needs and aspirations of the people. It also means that Government should provide an account of what it has done to implement those policies and plans together with the results of its efforts.

Citizens for their part have a responsibility to hold their Government to account. They should participate in public life, voting for people they believe in, monitoring the Government’s actions, commenting on its policies and plans, and challenging it when things go awry. And when this is done consistently by a reasonably large number of people, governance will not only be good but also citizen-centric and citizen-driven.

[Dr. R. Balasubramaniam, Founder of Swami Vivekananda Youth Movement and GRAAM, is a public policy advocate and development activist. He is a visiting professor at Cornell University and IIT-Delhi.  He can be reached at [email protected]]