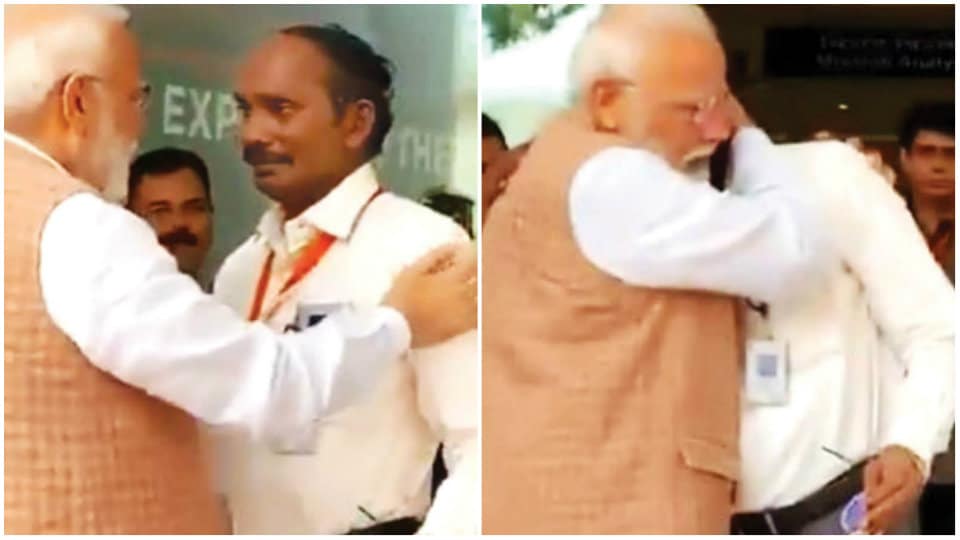 If there was any recent event that attracted more eyeballs than a cricket match that India played in, it was the watching of the final stages of Chandrayaan-2 (Moon Mission) on Sept. 6, 2019 as the Indian Space Research Organisation (ISRO) tried to get the Vikram Lander to have a soft landing on the South polar region of the Moon.  While several people expressed dismay and disappointment at ISRO losing contact with Vikram (meaning ‘valour’ in Sanskrit and celebrating Vikram Sarabhai, considered the father of space technology in India), several others saw this as part of an expensive learning curve.

Whatever the perspective one had, the image of Prime Minister Modi hugging and consoling K. Sivan, the Chairman of ISRO, caught the eyes and imagination of the public.  The Indian masses were given a first-hand demonstration of the human side of the Prime Minister and from the lens of a leadership expert, I saw several lessons that one could draw upon from this entire event.

Leadership is not just about occupying a position of power or authority.  It is having the ability to mobilise a group and their resources to engage in societally constructive action despite the enormous uncertainty associated with such actions.  The Mission to the Moon is an important milestone in the pursuit of space sciences and is loaded with several uncertainties. Despite the advancement of science and the growing capability of ISRO, there are still several factors that are truly beyond the control of man or his current knowledge of science.

What is admirable is the determination of our scientists led by ISRO’s Chairman in pursuing the mandate set out by the Government.  And, what the PM displayed was an outstanding expression of leadership that even his most ardent critics must appreciate and try to emulate.

Leadership is also about the man at the top providing a sustained presence to his team members during a crisis.  It is about taking responsibility without shirking away from the fear of failure or scape-goating others for not being successful. The PM being personally present in the control room of ISRO with all the senior scientists demonstrates how much the programme meant to the Government and the Nation and also sent out a clear signal of support and encouragement to the scientists.

While no one could have predicted the outcome of the Mission, it was in the manner in which the Prime Minister redefined the metrics of success and failure that is so laudable.  Shifting the narrative of success from a successful soft landing of Vikram to an endless pursuit of science which includes lifelong experimentation, the PM showed great maturity, spontaneity, wisdom and leadership in not just his body language but also in his subsequent words.  He wonderfully articulated how the Mission was also about learning and therefore the concept of success and failure was limited to whether one learns from the situation or not.

And true to this spirit, our scientists had already demonstrated how quickly they could learn in the manner in which they solved the initial hiccups that they had faced in the early stages of the Mission during the pre-launch process.

To quote the PM, he said, “resilience and tenacity are central to India’s ethos. In our glorious history, we have faced moments that may have slowed us but they have never crushed our spirit. We have bounced back again and gone on to do spectacular things. This is why our civilisation stands tall.”

He went on to say, “As important as the final result is the journey and the effort. I can proudly say that the effort was worth it and so was the journey. Our team worked hard, travelled far and those teachings will always remain with us. The learnings from today will make us stronger and better.” His presence, words and actions also communicated a powerful signal — one of hope, of confidence, of taking risks, of experimenting, of inspiring, and serving as an aspirational statement for the young.  It sent out the signal that hard work by itself was a reward, and that one cannot be merely focused on the ‘fruits of the action.’ In a visible sense, it was indeed Bhagavad Gita in action that one saw.

Leadership is also about trust, interdependence and the reciprocity that one shows in the way in which one engages with different stakeholders related to the issue.  By doing what he did, the PM gave a sense of urgency, importance and credibility to India’s scientific community. What we saw was not just ‘Authentic Leadership’ but also his ‘Crisis Leadership’ in action. We also saw his ‘Political Leadership’ in the manner in which he used the occasion to communicate the powerful symbol of national pride, civilisational connect and sense of oneness.  And in a powerful masterstroke, he helped establish an emotional connect with citizens and his potential voters. But importantly, he showed how that he is not just a politician but a Prime Minister for the entire nation.

From an objective viewpoint, Modi showed how one could combine several forms of leadership into a comprehensive and charismatic expression — something that very few political leaders around the world do today.  He showed how exercising ‘Total Leadership’ could be this ability of his to deftly and seamlessly combine what the context demands. And still manage to stay in control without losing out on the visibility or the central narrative.

The powerful imagery of hugging was not just a message for the ISRO Chief and his team, but to the entire nation.  Message that one cannot call anything as a failure, for failure in the traditional sense could be a powerful lesson too. It could further invigorate us to accomplish more. It would give us several new data points that could refine our future experimentation further.  The Nation does need a person who exercises demonstrable leadership that each one of us need to learn from and integrate into both our personal and public lives. And, once it gets embedded into the collective consciousness of the citizenry, then we can truly hope to build a ‘New India’.