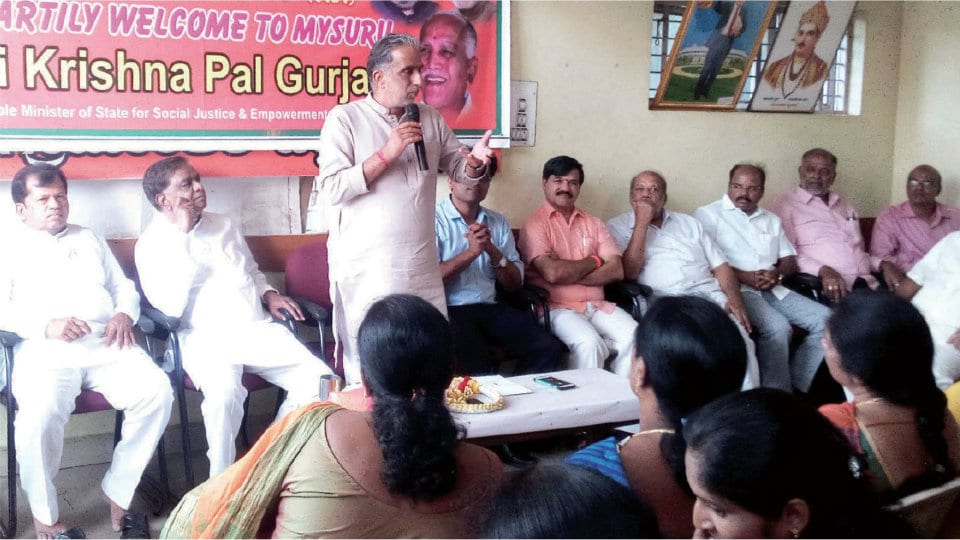 Mysuru: Asserting that the Narendra Modi-led NDA Government at the Centre has provided corruption-free and transparent Government in the past three years, Union Minister of State for Social Justice and Empowerment, Krishan Pal Gurjar, has asked BJP Workers to reach the programmes launched and the achievements made in various spheres by the Union Govt., to the door steps of the  people.

Addressing the BJP workers at the party office in Nazarbad here yesterday, Gurjar said that PM Modi, apart from giving corruption-free governance, has introduced several schemes for the upliftment of the poor and deprived classes.

Pointing out that Swachh Bharat Abhiyan has contributed towards the growth of the country, he said that Kerala and Sikkim have become open-defecation-free. The Gross Domestic Product (GDP) has increased, inflation rate has declined and foreign investment inflow into the country has increased significantly, he added.

Continuing, Gurjar said that Modi banned the use of red beacon lights atop vehicles to rid the country of VIP culture. Alleging that corruption was rampant during the previous UPA Government regime, he maintained that Modi had put an end to real estate mafia, which thrived during the UPA Govt. tenure. Stating that he was in city to popularise the achievements of the Centre, Gurjar briefed the party workers on various Central Govt. schemes and their progress.

Asserting that GST (Goods and Service Tax) will bring uniform tax rates in the country under the ‘One Nation One Tax’ concept, Gurjar said that Modi must be credited for implementing ‘One-Rank One-Pension (OROP)’ scheme and implementation of the recommendations of Seventh Pay Commission for Central Government staff.

Attacking the Congress for introducing schemes in the name of a political family, he alleged that the previous UPA Government was non-committal on the schemes announced by it.

Discussing Opposition criticism of the Government, Gurjar said that there is no controversy over Prevention of Cruelty to Animals (Regulation of Livestock Market) Rules, 2017.