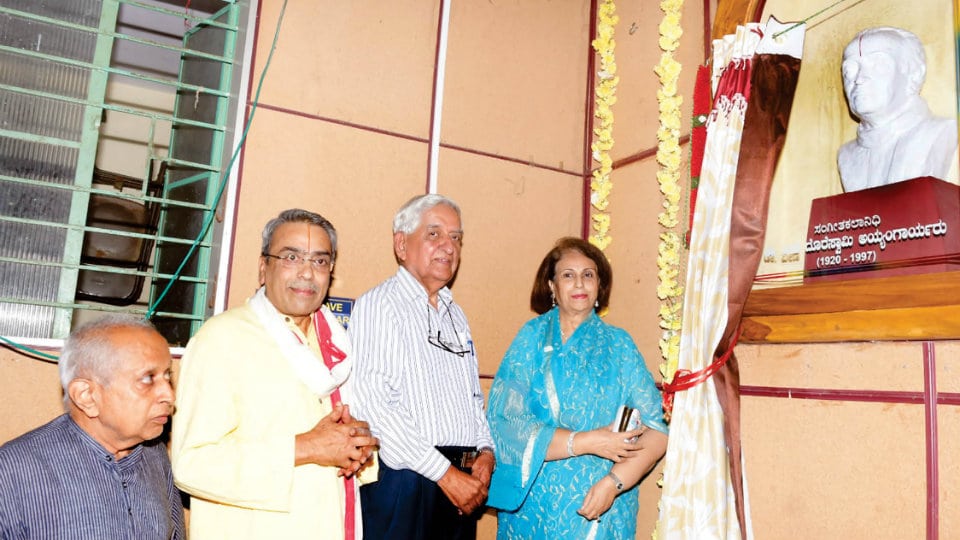 Always any event when planned to mark an occasion as special, demands great attention to all details to make it worthy.  One such occasion was 28th anniversary of Ganabharathi’s Veene Seshanna Bhavana built with all dedication, love, care and sustained well by self motivated art lovers.

The evening’s event started with an invocation ‘Kayo Sri Gowri’ rendered by the students of the Music School. Bhavana’s beginning and journey all along was well traced by the President Dr. C.G. Narasimhan.

Chief guest for that day could be none other than Rajamathe Pramoda Devi of the erstwhile Mysore realm. She was modest enough to say that she has come there as a representative of the Royal family which supported the art of music and the musicians like Veene Seshanna.

She recalled that her mother was the student of Vid. Venkatagiriyappa who himself was a disciple of Seshanna. Choice of the performer for the evening had to be none other than the lineage of Seshanna.

One such was the three generations down, Vid. D. Balakrishna son of Vid. V. Doreswamy Iyengar. Incidentally, it was Vid.  Doreswamy Iyengar who had done ‘Naada Samprokshana’ in the form of giving a veena concert 28 years back on this day while inaugurating Veene Seshanna Bhavana. His bust was installed and unveiled in the Bhavana on 26.10. 2019 by Pramoda Devi.

Vid. D. Balakrishna along with two of his senior students continued the tradition by giving a veena concert. Rarely such coincidences occur and are providential to remain special.

Notably his students Vidu. Vani Yadunandan and Vid. Srinivasa Prasanna, great grandson of Vid. Venkatagiriyappa are originally from Mysuru. Other accompanying percussionists were the most experienced Vid. G.S. Ramanujan on mridanga and Vid. S. Manjunath on ghata, also hail from Mysuru.

The specialty of the day’s concert as mentioned by Vid. Balakrishna himself was tracing the kritis in a chronological order.  Starting with Sri Jayachamaraja Wadiyar’s kriti ‘Sri mahaganapathim bhajeham’ in Raga Atana set to Adi taala, Mysore Sadasivarao’s kriti ‘Saketha Nagaranatha’ in Harikamboji with Roopaka taala  followed with a detailed aalapane by Vid. Balakrishna.

While Vidu. Vani elaborated with maturity the aalapane in Dharmavathi for the next kriti of Seshanna ‘Taramugadura’, Vid. Srinivasa Prasanna rendered proficient alapana in Bhuvanagandhari for Venkatagiriyappa’s ‘Lalithambe Sri.’ As such, all the three artistes had an opportunity to showcase ragaalapane with mellifluous elegance. Next the ever favourite Vasudevacharya’s  ‘Brocheva’ in Raaga Kamach resounded in the Bhavana excellently.

The path-breaking choice for the concert by Vid. Balakrishna was ‘Swarajithe’ of Veene Seshanna in Raaga Shankarabharana set to ‘Sankeerna triputa taala.’ The ghana raga taana alaapane in all the five ragas of the Panchratna keertanas was well-knitted by all the three performers. The complex, as the name suggests, Sankeertana triputa tala was a challenge to all artistes more so to the percussionists.

Taniyavartanam by Vid. Ramanujan was very precisely executed and equally matched by Vid. Manjunath on ghata. It was a nostalgic experience for the audience of listening to the melody of Doreswamy Iyengar’s veena as observed by Vidu. Neeraja Achuta Rao while summing up the concert.

Vid. Balakrishna recalled the association of his father and the noted littérateur late PuTiNa and how they combined in those earlier years. He then continued the concert with PuTiNa’s composition ‘Belagi nammee deevige’ in Raaga Yaman Behag set to Adi taala. Though he vocalised the first two lines, audience would have loved to hear more in this composition.

The ending was aptly left to a Thillana composition of Vid. Doreswamy Iyengar in ‘Salaga Bhairavi’ Raaga set to Adi taala. The  audience were in good number to encourage the organisers and artistes. Those music lovers who could not attend were curious to know the specialty in the programme which is highlighted as above.