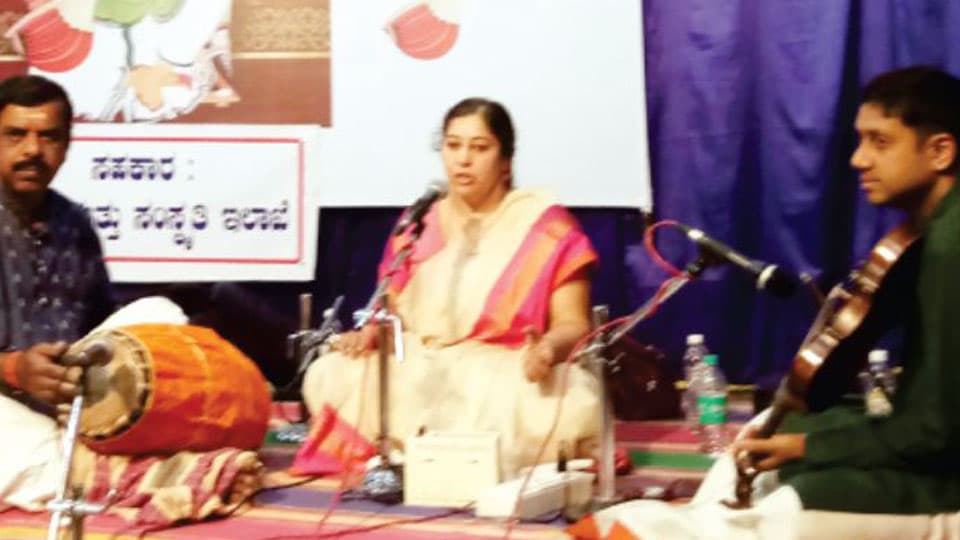 A different variety of programmes marked Muthuswami Dikshitar’s Day at Ganabharathi of Mysuru on Nov. 25 and 26 at its Veene Seshanna Bhavana.  Prof. Vishweshwaran gave an erudite lecture demonstration on the 25th and vocalists and instrumentalists paid rich tribute to the great composer on the 26th.

The topic of Prof. Vishweshwaran’s talk was ‘Deepness of Muthuswami Dikshitar’s Navagraha Kruti and its counterpart in Western music.’ The second part indeed had created much curiosity among the listeners. The cluster compositions or Krutis in group of Dikshitar  like Navagraha, Neelothpalamba, Kamalamba and Abhayamba Navavarana, Pancha bhootha sthala linga and Devi Krutis are a unique contribution to music.

They have captured the very essence of Vedantha, Tantra, Sanskrit and music. He has composed nine krutis exclusively on the nine planets in his Navagraha Krutis. Prof. Vishweshwaran explained each composition in detail and sang them. Later on, he unveiled the result of his research on the similarities in the subject and attitudes of two great composers — Dikshitar and Gustav Theodore Holst, an Englishman. It is interesting to know that Gustav (1874-1934) was a Sanskrit scholar and went on to translate ‘Sita’, ‘Savitri’, Rig Veda hymns and texts of Kalidasa. Whether he had heard Dikshitar’s Navagraha Krutis or not, probably was the first western composer to compose on the Planets. The striking similarities between the two composers expression, apart from the subject, attracted Prof. Vishweshwaran and encouraged him to know more about his compositions on the planets. He demonstrated it by playing clippings of Gustav’s compositions that made the presentation more interesting.

On the 26th, Vid. Krishnamurthy along with K. Chetan Kumar, A. Puttaswamy, P. Shivu and Mahadevaswamy started off with a grand Nadaswara-Dholu concert.  ‘Vatapi’, ‘Akhilandeshwari’ and ‘Sarasijanabha Sodari’ paved way for the other compositions of Dikshitar by other artistes. Vid. Manasa Nayana rendered ‘Panchamathanga’, ‘Bruhannayaki’ , ‘Hariharaputram’ and ‘Kailasanathena’ in a scholarly manner.  He was accompanied by B.K. Raghu and M.S.Jayaram.

Many popular and also some unheard pieces were presented with numerous improvisations that was quite a new experience for the listeners.

Vasudha Keshav sang ‘Santhana Gopala’, ‘Kamakshi Kamakoti’ and ‘Mayuranatham’ in a classical rendering. She was accompanied by Vidu. M.A. Jyothi and A. Radhesh.

Vid. Vamshidhar played ‘Sri Mathrubhootham’, ‘Ramanatham Bhaje’, ‘Ranganayakam’ and ‘Sri Krishnam Bhaje’ on the flute along with C.N. Tyagaraju and G.S. Ramanujam. The last rendering was by Vid. N. Srinath, who chose ‘Siddhivinayakam’, ‘Govardhana Gireesham’ and ‘Meenakshimemudam’ in an attractive way. He was accompanied by M.A.Jyothi and Kanchana Eshwara Bhat.

It was a great opportunity to listen to many unheard and rare Kruthis of the inimitable Muthuswami Dikshitar. Thanks to Ganabharathi for providing such an opportunity.