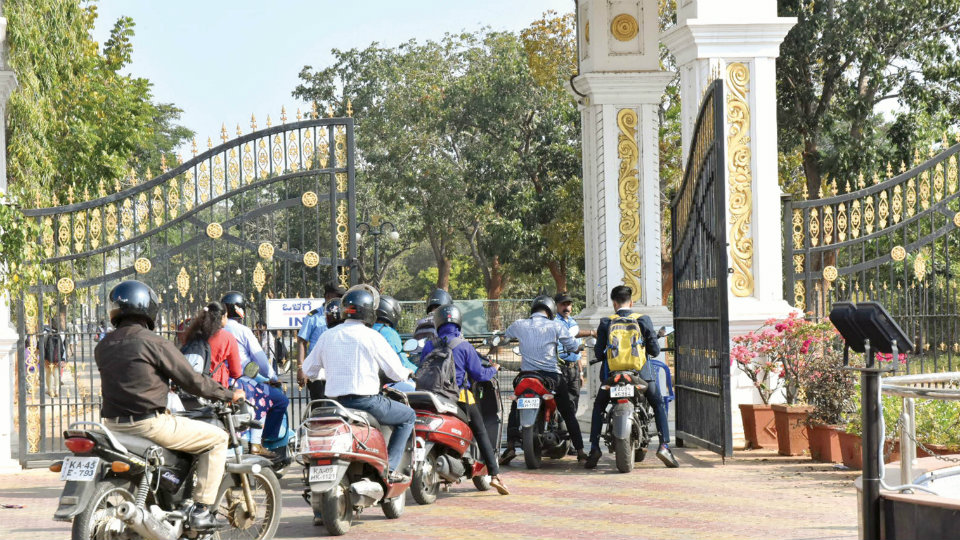 Mysuru/Mysore: With outsiders extensively using the University of Mysore (UoM) campus at Manasagangothri to reach Hunsur Road and SJCE through the entrance to the University campus from Bogadi road side, where Kuvempu statue has been installed, the University has restricted the movement of outsiders and their vehicles in the campus, starting from yesterday on an  experimental basis.

With the restriction in place, the University has deployed more number of security personnel at the entrance from Bogadi road side and from SJCE side to monitor everyone entering the campus and the movement of private four-wheeler vehicles including auto rickshaws. All outsiders and private vehicles are barred from using the campus thoroughfare.

When contacted, UoM Registrar Prof. R. Shivappa confirmed the restriction on movement of private vehicles and outsiders in the University campus. Pointing out that battery operated buggies (e-CART vehicles) have been pressed into service in the Manasagangothri campus for the benefit of the University students, the Registrar said, ‘the restriction on public movement and movement of private vehicles has been done on a pilot basis. The restriction is aimed at familiarising the students on using buggies that have started operating in the campus. However, the students have to pay for their travel in e-carts. The fare is fixed at Rs. 5 and is very affordable as compared to autos and cabs.’

Asserting that the move is also aimed at preserving the serenity of the campus, Prof. Shivappa  maintained that the University has no intention of troubling the public and motorists. He further said that the public and private vehicles are appealed to take alternative routes.

UoM Vice-Chancellor Prof. G. Hemantha Kumar said that most of the Universities in the country do not allow the movement of private vehicles in their campus. Likewise, the UoM too taking into consideration the environs  and the serenity of the campus, has started operating two eco-friendly buggies in the campus.

Yesterday, the movement of four-wheelers were restricted, the VC said and added that the restriction on two-wheelers too will be introduced in later phases. However, there will be no restriction for the vehicles of University students, he clarified.