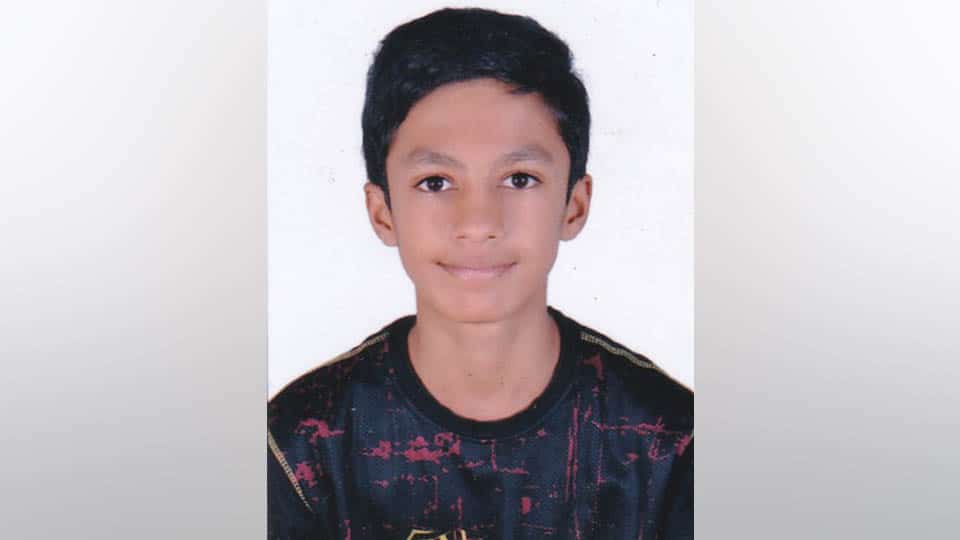 Football is the most popular sport in the world sporting scene and has a large following across the globe. The game requires excellent skill, fitness from the individual player and as it is a team game, excellent co-ordination with fellow players is also must. Mysuru has been producing talented footballers from time to time who have gone on to play at different levels. One such player from city is N. Naveen Kumar of Citizen FC, who has done everyone proud by representing Karnataka State Sub-Junior (U-14) football team in the National Sub-Junior Football Championships (2017-18) held at Chandigarh in September 2017, and by being a part of the Karnataka team that won South Zone title. He is our ‘Star This Week.’

Fourteen-year-old Naveen, who  plays as a midfielder and also as striker some times, impressed the State selectors with his impressive play and represented Karnataka in U-14 National Sub-Junior Football Championships 2017-18 held at Chandigarh, and gained  valuable experience by being part of the team which lost to SAI, Gwalior 0-2, beat Madhya Pradesh 2-0, drew with Meghalaya 0-0 and lost to Delhi 0-2.

Karnataka emerged as the winners in the South Zone U-14 Sub-junior Championships 2017-18 held at Anantapur in September and Naveen played a important part in Karnataka’s win. He played as a midfielder against Telangana which Karnataka won 4-0 and in the next match played a vital role in Karnataka’s win over Tamil Nadu 6-3.

Naveen, encouraged and inspired by his cousin, took up to football at a young age of 9 years. He initially trained and learnt the basis of the game from Gururaj (South Western Railway), football coach at the University Football Grounds. Naveen improved his game by watching YouTube football coaching videos and spent more time in practicing at the University Grounds in the mornings and evenings.

His talent was noticed by senior players like Shashwath, Dhanush and Abhilash, who guided him to take up to the game seriously by giving him the needed encouragement.  Football coach Ramani at the University Football Grounds also guided him and asked him to go for the State U-14 selection trials.

Manjunath, Hon. Secretary of MDFA, seeing his talent sent Naveen to Bengaluru for U-14 state selection trials. Naveen impressed the State selectors with his talent and earned selection to the Karnataka State U-14 team for the South Zone U-14 tournament.

A ninth standard student of Vijaya Vittala Vidyashala, Mysuru, Naveen is the son of Narashima Murthy and Nagashree, residents of Vidyaranyapuram in Mysuru. He plays for Citizen XI in the MDFA ‘B’ division football league.