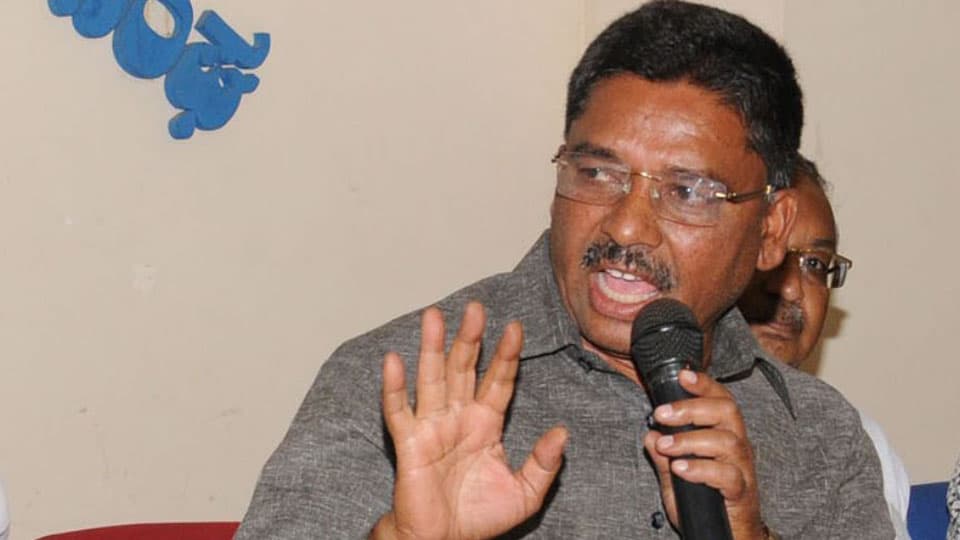 Whenever I go to Bengaluru, which is only when it becomes inevitable and inescapable, I stay in my sister-in-law’s place. You have guessed the reason. Really? The reason is my wife loves to stay with her sister.

Last week I was in Bengaluru to fulfil a family duty and stayed in HSR Layout where my sister-in-law Mrs. Rajani Bopaiah, a medical doctor’s wife, stays. As is my wont, I set out for my morning walk. It was then Rajani said I could go to a huge 10-acre newly-formed park near V.S. Ugrappa’s  house. Ugrappa who?, I asked. “A very powerful and influential politician. An MLC and very close to Siddharamaiah.”

Being a journalist, my guess was right. After all, I have not heard a name like Ugrappa except that of this politician who speaks like a Solomon. In the Legislative Council he is a trouble-shooter for Chief Minister Siddharamaiah.

Since I am not familiar with the surroundings of the HSR Layout, an understanding lady that she is, Rajani charmed her husband Dr. Bopaiah to accompany me for the walk. So it was. “Don’t forget to show his house,” she bellowed from the gate even as we had traversed a distance.

After a few minutes, we came to a stumbling block of barricade at the 19th Cross Road, III Stage, Ward No. 174 that led to the park and on which is situated the house of V.S. Ugrappa, B.Sc., B.L. Congress(S)* MLC. His present occupation: Practising Advocate in the Karnataka High Court; Member of Legislative Council and Chairman, Expert Committee on Sexual Harassment against Women and Children, Government of Karnataka.

Incidentally, this office of the Chairman was earlier gifted by Chief Minister Siddharamaiah to his friend M.C. Nanaiah, who was the Law Minister in JD(S) Government when Siddharamaiah was the Deputy Chief Minister. However, following JD(S)  Supremo H.D. Deve Gowda’s resentment, M.C. Nanaiah had to decline as otherwise he would be sacked from JD(S). I appreciate M.C. Nanaiah’s decision in the face of an opportunity to join Congress led by Siddharamaiah. Who knows, he would have become a Minister.

Now, let us see what H.D. Deve Gowda does with Nanaiah after the next election next year. Will he reward Nanaiah with an MLC post for his loyalty to the party? Age may go against Nanaiah as it happened with L.K. Advani and many others in politics. Let it be.

The barricade with two guards, one I guess was a private one, was to shoo away the tresspassers or the gate-crashers wanting to meet the MLC. This is to check those who zoom through the road and have easy access to Ugrappa’s residence. Scrutiny Sir, Security. However, this has become scandalous gossip among the residents in the locality. “Public road and tax-payers are not allowed the use of this road,” was the refrain, I am told. I am inclined to agree after seeing the location. Any evil-doer can still easily access the road from the other end. The area is quite porous. And then the question is: Is Ugrappa such an important VVIP with serious threat perception that he needs this kind of security? I do not know.

Soon I was in front of the house of a “famous politician” — the identity was declared with a granite tablet that said “Swabhimana” and his name. A double-storied house on a big site, could be 50’x80’.

I was told that the MLA from the HSR Layout, 3rd Stage, is one Satish Reddy of BJP and the Bruhat Bengaluru Mahanagara Palike (BBMP) member is one Gurumurthy, also from BJP. However, these three political animals seem to work in tandem, despite political differences, for the good of their constituency.

I was briefly given a pep talk on the birth and growth of Ward No. 174 by a local old man I met in the newly-built 10-acre wide park with a Kalyani and well-paved walkways.

A few years back, it was a huge vacant land, a kind of ‘no man’s land’. A minority community group tried to take it over making a false claim of ownership. In the meanwhile, a slum appeared there with over 500 people. One old national political party was keeping these slum dwellers as vote bank, paying them periodically some money and during election time, of course, the special payment.

In competition, the other young national political party honchos were trying to encroach or grab this land for developing it as sites after creating fake documents, of course. But the BDA had long acquired it, I was told, but as usual some legal issues were left hanging.

Enters Ugrappa. The land was legally taken possession of by the BBMP or BDA and made into a layout with a park. Ugrappa and a few other politicians too got sites here and under Ugrappa’s initiative with support from his friend Siddharamaiah, the Chief Minister, money flowed in and the park was created. My sister-in-law suggested it be named Ugrappa Park as a tribute to this man’s efforts in saving the land for the people, for making this beautiful huge park and preventing it from going to the vested interests.

It appears after the park was ready, Suprabatha, a morning invocation to Hindu God Venkateshwara, is now being played through loudspeaker for about 5-10 minutes daily in the morning. Soon a person living in the vicinity, who had tried to claim the land for his community, complained to Ugrappa that the music disturbed him in the morning, hoping as a Congressman Ugrappa would support him.

But Ugrappa, it seems, told that man about his people playing loud-speaker five times a day in the same area… Amen.

Ugrappa, people told me, is a level-headed politician like Nanaiah. It is possible he was once again nominated (I think) as MLC by Siddharamaiah for his gift of the gab and ability to speak with absolute clarity. Like Nanaiah he can forcefully put forward his argument to defend his master — the Chief Minister. Nanaiah did this very well in the Legislative Council to defend Ramakrishna Hegde and Deve Gowda later. Now Ugrappa is doing a similar job excellently for Siddharamaiah. I am told he is unassuming and  sans hubris like his master, Chief Minister Siddharamaiah.

A very good listener and conversationalist apart from being knowledgeable, says Rajani. Unfortunately he is in the wrong party. He should have been in the old vintage JP’s Janata Party or the later day JD(S), but not the present one.  Not many choices these days for a follower of Jayparakash Narayan (JP). We can only despair.

One of the rare good, decent politician in this age where there is a critical shortage of value-based politicians.

My only regret is that I could not meet him in Bengaluru as he was at the election campaign for the by-poll at Gundlupet and Nanjangud. After  all, there is always a tomorrow.