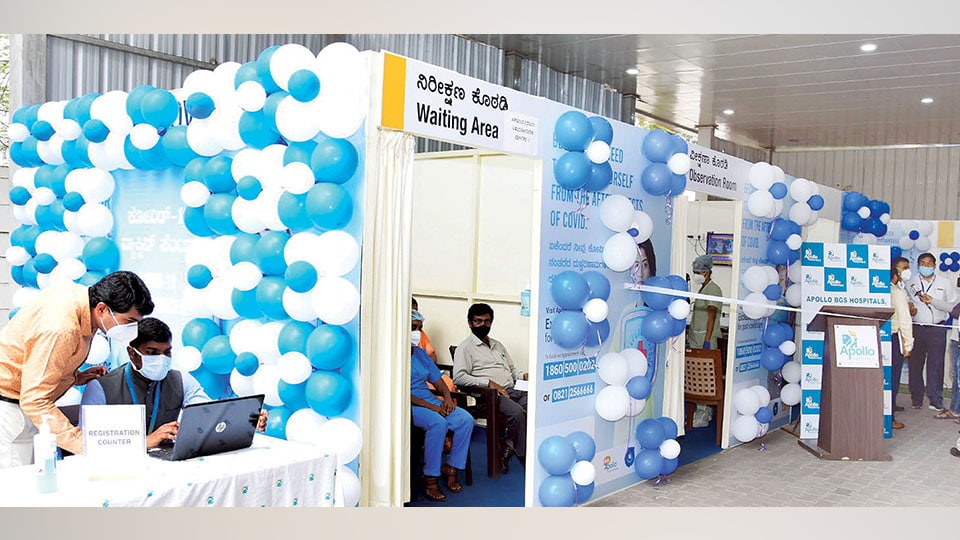 Mysuru: Health and Medical Education Minister Dr. K. Sudhakar announced in Bengaluru this morning that 13.90 lakh Covishield vials will arrive in Karnataka tomorrow and the much-awaited vaccination will begin from Monday (Jan. 11).  “I will like to share good news with the people. Union Health Minister Dr. Harsh Vardhan informed this morning that 13.90 lakh vials will be sent to Karnataka on Saturday. Once received, the vaccine will be distributed to all 30 districts”, Dr. Sudhakar told media after inspecting vaccine dry run at a hospital in State capital today.

The Health Minister said the list of healthcare workers who would receive the first shot was ready. Those doctors, including dentists, who have not registered their names to get the first dose could do it immediately by uploading details in CoWIN app.

Sources close to the Minister told SOM that the Covishield vaccine, developed by University of Oxford and Pharmaceutical Company AstraZeneca, and manufactured by Serum Institute of India, Pune, is supplied to Karnataka.

Ten persons could be vaccinated from each vial. The special kind of syringes have already arrived in Bengaluru and the same had already been distributed to all districts.

Two vaccines have been approved for vaccination — Covishield and Covaxin. In first round, only healthcare workers will be vaccinated, followed by Corona frontline workers. Thereafter, citizens above 50 years of age and those below 40 years of age but with comorbidity would receive the vaccine.

In Mysuru district, as many as 35,000 healthcare workers have been identified to take first shot of vaccine. They included doctors in Government and Private Hospitals, nurses, para-medics, medical students, Group ‘C’ and ‘D’ employees. The District Administration had already prepared the list and submitted to the State Government for approval.

The vaccine will be administered to all healthcare workers at hospitals in City and Primary Health Centres in rural areas.

Already, vaccinators have been trained in handling the vial as well as in administering the vaccine. All the vaccination points have been identified and notified as per directions of Union Health and Family Welfare Ministry.