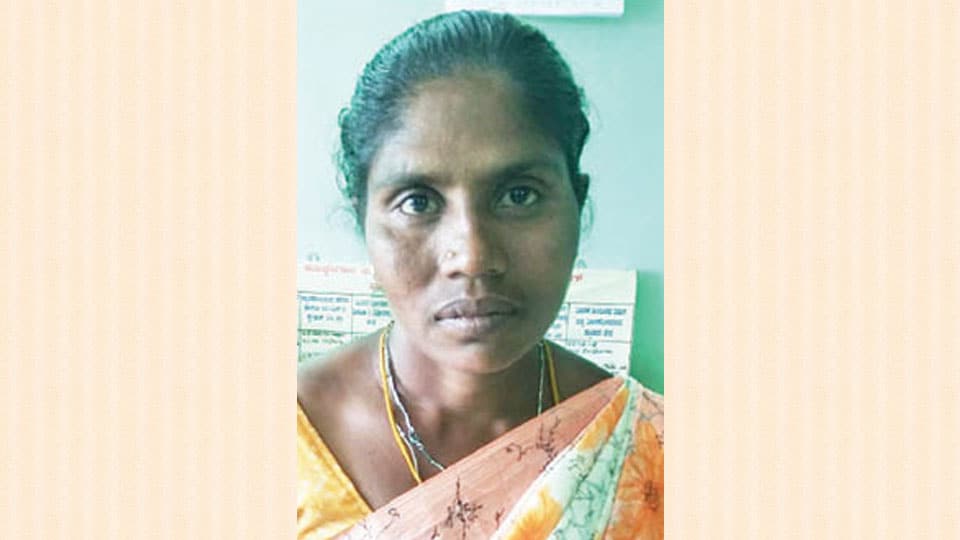 Kollegal: A woman associate of forest brigand Veerappan was arrested by Kollegal Crime Branch Police in Chamarajanagar District on Saturday, 27 years after she was booked under the Terrorist and Disruptive Activities (Prevention) Act (TADA). Forty-year-old Stella alias Stella Mary had been absconding since 1993. She has now been sent to judicial custody.

Mary is the wife of Veluswamy of Jageri. She and her second husband had rented land and were cultivating sugarcane. Police got definite information about Stella, a resident of Nallur village in Kollegal Rural Police limits, while investigating an attack by wild elephants on her sugarcane field recently.

She had opened fire to drive the elephants away but it caused in a minor fire. When Police inquired on how she could operate the gun, Stella Mary revealed about her past involvement with the Veerappan gang. She told the Police that she had joined the brigand’s gang when she was 14 years old and was in the gang for two years. She was hiding since 1993. She remarried following the death of Velayan.

“She is facing three cases under TADA related to the Palar bomb explosion, attack on Ramapura Police station and illegal transportation of arms,” said Chamarajanagar SP H.D. Anand Kumar, adding, “Despite repeated warrants, she did not surrender.” The Palar bomb blast took place in 1993, which was executed by Veerappan, targeting STF Chief K. Gopalakrishnan and his team.

The SP said that Mary joined Veerappan as the brigand kidnapped her and her brother in-law Sesharaj for looting his money and hiding it inside the forest. She hails from Maartalli village in Hanur taluk. In 1993, Male Mahadeshwara Hill Police booked her under TADA.

All these years, she was living on the forest fringes and she had been in the woods with Veerappan’s gang for over 18 months. Her first husband was Veerappan’s aide Sunda alias Velayan who fell in love with her and married her during the forest stay. Following Velayan’s death, Stella married Veluswamy of Jageri Chennipuradoddi village, Kollegal taluk, and they cultivated sugarcane for a living, Police added.

It may be recalled here that in August 2017, the Ramapura Police in Chamarajanagar had arrested 52-year-old Shivaswamy alias Dumble Gundi, another Veerappan aide, who was an accused in attacking Ramapura Police Station on May 19, 1992, during which five Police personnel were killed. The gang had also looted fire arms from the Police Station. Even Shivaswamy was arrested after 25 years.