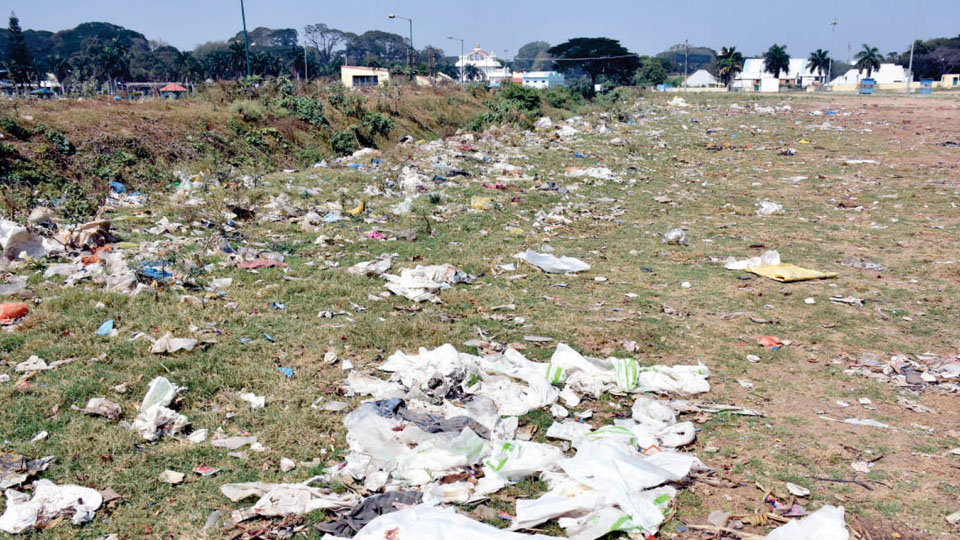 Vegetable vendors to be evicted from Dasara Exhibition Grounds

Mysore/Mysuru: The M.G. Road vegetable market that was shifted to Doddakere Maidan (Dasara Exhibition parking lot) will move back to its old place (M.G. Road) as the Karnataka Exhibition Authority (KEA) has decided to take back the space from vendors.

A decision to this effect was taken at the Governing Council meeting of the KEA that was held at KEA premises yesterday. The meeting was headed by KEA Chairman Hemanth Kumar Gowda. It may be recalled here that on April 25, Mysuru City Corporation Commissioner Gurudatta Hegde had ordered to shift the congested M.G. Road market to a spacious Doddakere Maidan following complaints of vendors and buyers not following social distancing amidst COVID-19 contagion.

The order was passed after the officials realised that unhygienic practices at M.G. Road Market could prove dangerous amid the disease outbreak. The market was shifted amidst stiff opposition from the vendors’ community.

As over 50 to 60 vendors were convinced by the District Administration to move to Dasara Grounds and as some of the vendors continued to stay put at M.G. Road Market, there were simultaneous markets at two places. Now that the KEA has decided to take back the premises, these vendors have to go back to the old place.

Speaking to Star of Mysore this morning, KEA Chairman Hemanth Kumar Gowda said that the pandemic has resided and as such the KEA has decided to shift the vendors. “Every month we spend Rs. 25,000 to Rs. 30,000 to clean our premises and provide toilet and electricity facilities to the vendors. This is unproductive expense and we have to bear it,” he said. The KEA Chairman said that he would write to Deputy Commissioner seeking nod to evict the vendors from Dasara Grounds back to M.G. Road.